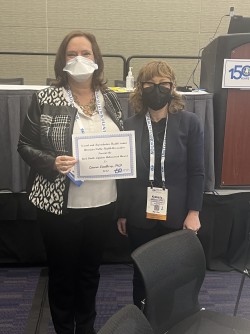 Newswise — Rutgers School of Public Health professor in the Department of Urban-Global Public Health, Laura Lindberg, PhD, has received the 2022 Carl S. Schultz Lifetime Achievement Award from the Sexual and Reproductive Health Section of the American Public Health Association. The award was presented to Lindberg at the organization’s annual meeting in Boston.

The Carl S. Schultz Lifetime Achievement Award is given annually to recognize leaders, who through scholarship, innovation, and action have impacted the field of population and reproductive health. The award is named after Dr. Carl S. Shultz, a pediatrician and public health servant who played an instrumental role in creating and implementing the federal family planning program, Title X.

Lindberg, a social demographer, has focused her research on addressing systematic and longstanding disparities in sexual and reproductive health and rights in the United States. Her policy-focused work is wide-ranging, addressing key sexual and reproductive health issues including abortion, adolescent sexual behavior, sex education, pregnancy intentions, contraceptive use, and family planning. Lindberg’s current initiatives include improving the measurement of abortion in United States surveys and use of telehealth for contraceptive services. Lindberg also recently spearheaded a national survey to assess the impact of the COVID-19 pandemic on women’s fertility preferences and access to sexual reproductive health care.

“I am honored to receive this award,” says Lindberg. “Sexual and reproductive health, rights, and justice are under attack in our country and I am committed to research which bring facts and science to this political fight.”