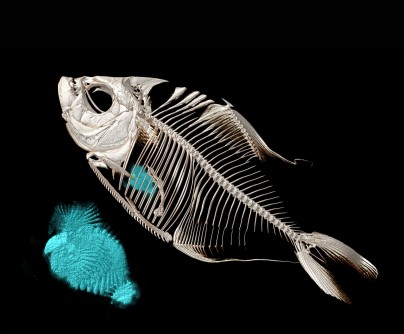 A CT-scanned image of the piranha Catoprion mento. The blue-dyed segments inside the skeleton are fish scales eaten by the piranha (also shown enlarged next to the fish). 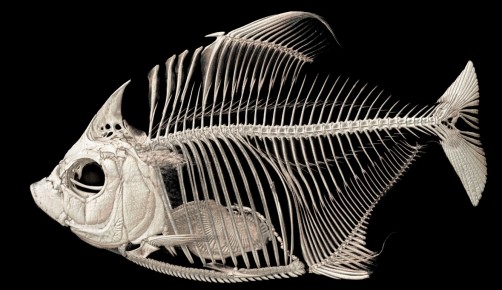 A scan of the piranha Catoprion mento, with scales in its stomach.

A scan of the piranha Catoprion mento, with scales in its stomach.

Photos available for download: https://flic.kr/s/aHskuHakDU FROM: Michelle MaUniversity of Washington

Think of them as extra-large parasites.

Newswise — A small group of fishes — possibly the world's cleverest carnivorous grazers — feeds on the scales of other fish in the tropics. The different species' approach differs: some ram their blunt noses into the sides of other fish to prey upon sloughed-off scales, while others open their jaws to gargantuan widths to pry scales off with their teeth.

A team led by biologists at the University of Washington's Friday Harbor Laboratories is trying to understand these scale-feeding fish and how this odd diet influences their body evolution and behavior. The researchers published their results Jan. 17 in the journal Royal Society Open Science.

"We were expecting that with this specialized scale-eating niche, you would get specialized morphology. Instead, what you get is a mosaic of strategies for the end goal of scale feeding," said lead author Matthew Kolmann, a postdoctoral researcher at Friday Harbor Laboratories.

"This niche has a hidden complexity to it, and it is yet another story about the incredible diversity of life on Earth."

The researchers compared two species of piranha fish — one that feeds on scales only as a juvenile and another that eats scales its whole life — and two species of characin fish, commonly known as tetras, with similar eating habits as the piranhas. They found that all four of the scale-feeders varied considerably in their body shape and feeding strategy.

The piranha that eats scales its whole life, named Catoprion mento, tends to live alone. When it does hunt, it swims up behind its prey, opens its large, Jay Leno-like jaw 120 degrees and pries large scales off the sides of other fishes. These piranhas can tolerate nearly a dozen large fish scales in their stomachs at one time; that's like a human swallowing a dozen silver dollar pancakes in a single bite.

In contrast, the characin fish most similar to the piranha in life history and eating preferences gets its food in an entirely different way. The blunt-faced fish, called Roeboides affinis, has teeth on its nose and butts its face into other fish, devouring the scales as they fly off from the force of impact.

The research team gathered its data by CT scanning specimens of each fish at different ages at Friday Harbor Laboratories on San Juan Island. Using iodine-contrast staining, they were able to examine the internal anatomy of the four species to better understand what traits are shared by fishes that employ such a rare feeding strategy.

The stark differences in jaw and head shape, combined with how each prefers to hunt, shows a great diversity among the small number of species that have evolved to eat scales, the researchers found.

"This study would have been extremely hard to do without the CT scanning," said co-author Jonathan Huie, a UW undergraduate student in aquatic and fishery sciences. "We were able to look at the image slices from three different points of view, and could more accurately pinpoint and measure certain elements like the jawbones."

About 50 fish species are classified as scale-eaters, and all of them live in the tropics. Previous studies have shown — and the CT scans confirm — the fish are able to digest entire scales. The mucous lining the inside of each scale is thought to be appealing to fishes, but there could be other reasons why they prefer the entire scale, Kolmann said.

Most of the piranha and characin scanning was completed last spring during an undergraduate marine biology course at Friday Harbor Laboratories. Huie, then a student in the class, and the other co-authors scanned fish from collections all over the U.S., then meticulously measured a series of traits that are important for feeding, such as the sharpness and shape of various teeth.

The completed scans join a growing online library of 3-D digital fish replicas, pioneered by Adam Summers, a co-author and professor at Friday Harbor Laboratories, with the intent of creating an open-source repository for researchers and the general public to learn about all of the fish on Earth.

Co-author Kory Evans, a postdoctoral researcher at the University of Minnesota, and Kolmann conceived of this project when they both discovered rare, scale-eating fish in their respective field projects involving different fish species in the Amazon.

Kolmann will continue studying the evolution and feeding patterns of piranhas in his new position at George Washington University, where he will have access to the Smithsonian Institution's fish collections.

This research was funded by Friday Harbor Laboratories scholarships and fellowships.