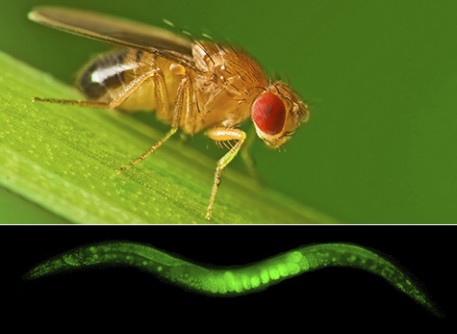 D. melanogaster, the fruit fly, (top) has served for more than 100 years as a model for human biology, while the transparent worm C. elegans (bottom) is a comparative newcomer with a 40-year service record.

Newswise — The genome we inherited from our parents shapes many aspects of our lives. But in addition to our genome we have an epigenome that is set during development, but can be altered by our lifestyle habits and environmental exposures—and perhaps by those of our parents and grandparents.

The epigenome consists of chemical tags on our DNA and supporting proteins that determine whether genes are expressed or silenced.

This means we are deeply responsible for our own health, but also that it may be possible to diagnose and treat the many diseases caused by the deregulation of gene expression rather than by gene mutations. These include cancer; Alzheimer’s disease; diabetes; and many incurable and frequently devastating autoimmune diseases.

In the August 28 issue of the journal Nature a multi-institution research network called modENCODE (the Model Organism ENCylopedia Of DNA Elements) has published three major papers that map and compare the genomes and epigenomes of humans and two model organisms, the fly, Drosophila melanogaster, and the worm, Caenorhabditis elegans, in unprecedented detail.

Sarah C. R. Elgin, the Viktor Hamburger Professor of Arts & Sciences and professor of biology at Washington University in St. Louis, and her lab were part of the team that analyzed the epigenetic marks on the chromatin in selected cell lines and developmental stages of the fly. Chromatin is the complex of DNA and the proteins that package it up so that it will fit into the cell nucleus.

For the most part their genome-wide surveys bore out earlier results found by analyzing the epigenetic marks on single genes, Elgin said. But these comprehensive maps are nonetheless important in establishing the patterns for the genome as a whole. Because the epigenetic marks are reversible, they are already the target of efforts to develop new therapies, especially for cancer but also for many other diseases.

But precisely because errors in epigenetic marking are associated with so many diseases and our understanding of the machinery that sets these marks is rudimentary, Elgin feels that disease models and drug candidates should be tested in model organisms, such as the fly.

Although fruit flies might seem too different from us to provide a useful model, over half of the genes associated with human cancers and other genetic diseases are found in the fly genome, and cause similar problems when mutated, she said.

Packing it inGenes can be damaged by radiation, chemicals or errors in the replication of the DNA, and these changes to the sequence of nucleotide bases (A, T, C, and G) in the DNA are sometimes harmful.

But scientists have long known that the function of genes can be changed without changing the DNA sequences themselves. Two processes that alter gene expression without altering sequence are DNA methylation and histone modification.

In the first process, small chemical tags, called methyl groups (CH3), are attached directly to the DNA, typically to cytosine nucleotides next to guanine nucleotides. Methylation of the cytosine in the region around the start site for expression of a gene often silences the gene.

DNA methylation is thought to play a role in regulating much of the human genome, and dysregulation of this modification is associated with cancer and neurodegenerative disorders.

In the second process, chemical tags are attached to the histones, special proteins around which DNA is wound like thread on spools. The wound spools, called nucleosomes, are the basic subunit of chromatin, but strings of nucleosomes are only the first level of the hierarchical organization of the DNA. The strings coil on themselves to form chromatin fibers and then fold and fold again and again to form the compact structures we call chromosomes.

In order to be read, the genes have to be accessible, and when the DNA is in its condensed or compacted form, the genes are silenced. One way that the cells can open or close access to a gene is by modifying the histones around which the DNA is wrapped.

The histones have long tails that stick out from the nucleosome to which small chemical groups can be attached. If the histones are unmodified, the positively charged histone tails bind tightly to the negatively charged DNA. Some chemical modifications, such as the attachment of an acetyl group (COCH3-) to a histone tail, help to neutralize the tail’s charge. The tail binds the DNA more loosely, the chromatin is looser, and the genes on the DNA are easier to transcribe.

The modENCODE chromatin team mapped 25 histone modifications throughout the genomes of carefully chosen cell lines and developmental stages of the fly and worm. Computer analysis showed 16 of these marks could be clustered into nine “states,” each associated, with a functional element, such as an active promoter, or a region of silenced DNA called a polycomb body.

Elgin, who has studied chromatin structure for many years, winces a little at the thought. The language of epigenetics is genome-wide and drugs that write or erase these chemical marks might do so indiscriminately. For this reason epigenetic therapy could be as dangerous as chemotherapy, which also acts promiscuously against all cells.

“They’re giving a drug to a whole person; they’re not just giving it to their tumor cells,” she said. “If you’re going to alter the level of gene activation, you need to think about what could be the impact on other cells.” This is where model organisms could be a big help, Elgin said.

She has in mind a bioassay for neurological diseases caused by what are called triplet repeats. These are a series of three nucleotides that are repeated again and again in a tandem array.

One of these repeats, for example, occurs within a non-coding part of a gene that makes a protein called Frataxin. In healthy people the triplet may repeat as many as 60 times, but at some point it crosses a threshold and triggers machinery that tries to silence the repeat, in the process silencing the gene. Loss of Frataxin causes Friedreich’s ataxia, a debilitating disease characterized by loss of coordination (ataxia) in the arms and legs.

“What seems to be happening,” Elgin said, “is that the epigenetic machinery, identifying the repeats as disruptive or aberrant DNA, tries to silence them, and ends up silencing the gene. ‘

Richard Festenstein, an investigator at Imperial College, London, has recently succeeded in modeling Friedreich’s ataxia in mice, demonstrating that a similar triplet repeat introduced into the genome will be similarly silenced.

A model of this sort in flies or worms would provide significant advantages for screening drugs and micronutrients for their impact on the epigenome, Elgin said. Model organisms have already been important in developing our basic understanding of how life works, she said, and model organisms will continue to be important as we move into the exciting era of epigenetics.

To learn more about the use of flies and worms in current health research, and about epigenetics, visit http://modencode.sciencemag.org/, prepared by members of modENCODE working with Science magazine.