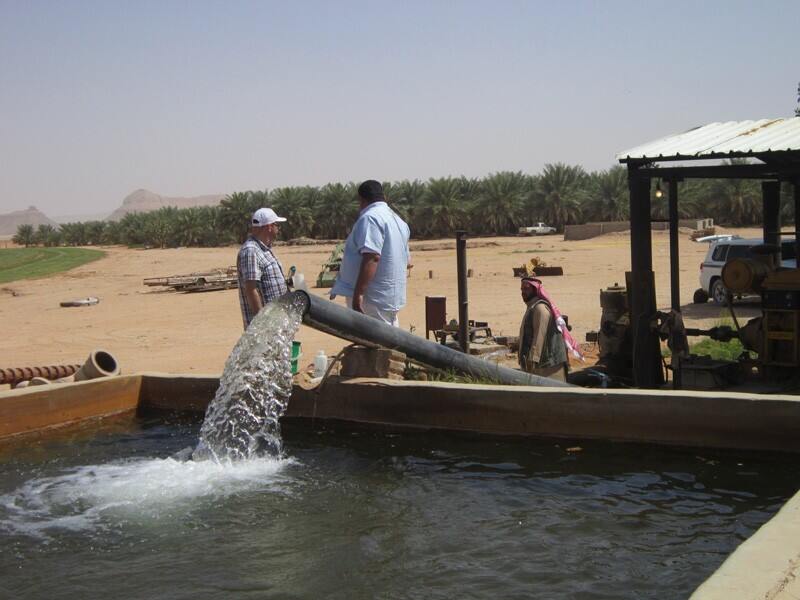 Newswise — In a place like Delaware, where it rains frequently, water is a renewable resource. Natural processes will replenish the water that is being used or consumed. In an area where rain is not as plentiful, such as the Arabian Peninsula, however, it is crucial to get a handle on how much good water is available under the arid desert in what are known as fossil aquifers — aquifers that store older water.

The University of Delaware’s Neil Sturchio, professor in the Department of Earth Sciences in UD’s College of Earth, Ocean and Environment, with colleagues from several other institutions, co-wrote a paper in the Journal of Hydrology that assessed the age, origin and sustainability of fossil aquifers in the Mega Aquifer System (MAS) in the Arabian Peninsula.

The MAS underlies most of the vast deserts of the Arabian Peninsula and is one of the largest aquifer systems in the arid world, occupying territory in the Saudi Arabia, Iraq, Jordan, Oman, Yemen and the United Arab Emirates.

Sturchio conducted geochemical and isotopic studies that helped determine the quality and age of the water, which showed how the age relates to the hydrology and the history of the aquifer.

Isotopic measurements are powerful tools for tracing the moisture source of an aquifer and the residence time and flow path of the groundwater, especially when used in conjunction with numerical flow models that incorporate water table elevation measurements and aquifer hydraulic properties.

Hydrogen and oxygen isotope ratios of the water molecule were used to trace its moisture source, and the radioactive isotopes carbon-14 and chlorine-36 were used to evaluate the subsurface residence time (age) of the water.

Knowing the age of the water in the aquifers helps scientists understand how quickly or slowly they are recharging, vital information for sustainably managing water use.

Sturchio said that this study was important because this area of the world hasn’t had many modern, state of the art investigations conducted to show how to effectively manage their resources.

“Their population is growing so they are experiencing all the usual problems that go along with having a lot of people and water is becoming more and more of a problem,” said Sturchio.

While much of the landscape of the Arabian Peninsula receives less than 25 millimeters of rain per year, in previous wetter climactic periods these areas received higher amounts of precipitation, which helped recharge their aquifers.

This groundwater is now considered fossil, but in areas of the MAS that receive higher amounts of precipitation — mainly the mountainous areas in the southern section of the MAS that underlies the Rub Al Khali (RAK) desert — the older water mixes with the new as aquifers receive modern recharge from precipitation.

Unlike the southern portion of the MAS, which at the current levels of water extraction can be used for development of sustainable agriculture in Saudi Arabia, the central and northern sections of the MAS are being overly exploited when it comes to groundwater extraction.

Because they are showing signs of serious decline in water levels, it is important to determine the age of the water to show how quickly the aquifers are replenishing themselves. This will help with identifying locations and developing scenarios by which the resources can be managed in a sustainable manner.

In addition to the usual chemical and isotopic measurements that help date the water and tell about the water quality, the researchers used observations from the Gravity Recovery and Climate Experiment (GRACE) satellite mission that was launched in 2002 by the U.S. National Aeronautics and Space Administration (NASA) and the German Aerospace Center to help gauge the water levels in the aquifers.

The GRACE satellites map the variations in the Earth’s global gravity field on a monthly basis. By using the data from the satellites, researchers were able to get water balance calculations, detect water storage variability over basins and discern aquifer recharge and discharge rates.

“Year after year, you can compare the gravity measurements over a certain area and see how they’re changing. All things being equal, most of the change in the gravity is because of the addition or subtraction of water because nothing else is really changing that much. The rocks are just sitting there,” said Sturchio. “These gravity satellites are sensitive to the change in volume of groundwater. If you’re pumping it out too fast, you’ll see that the amount of groundwater is gradually decreasing.”

In addition to the GRACE, the researchers also utilized data from satellite-based precipitation measurements and conducted field investigations over the RAK aquifer system.

This combination of remote sensing, geochemical and field investigations was also utilized to determine where the water was originating, as well as the quality of the water.

They looked at the path the water takes to get to certain aquifers and found that most of the water follows a west to east drainage system, collecting precipitation over the Red Sea Hills and flowing across the Arabian Peninsula.

“We could see that most of the water under the desert is from the mountains in the western part of Saudi Arabia and the southwestern part of the Arabian Peninsula,” said Sturchio.

Groundwater that is located further out in the eastern portion of the desert is older and isotopically different than the groundwater closer to the Red Sea Hills, which indicates that it was deposited from the hills under different climatic conditions many years ago during the Pleistocene epoch, a time period that began around 2.6 million years ago.

It is also saltier and unsuitable for drinking and agricultural purposes. The groundwater originates in the mountains through recharge of precipitation, then passes through salt rock formations turning the water in the aquifers salty as a result.

“It’s saltier than seawater, and it can’t be used for anything in that case,” said Sturchio, who added that the age of the water in the eastern part of the Arabian Peninsula is about a million years old and more.

After determining the age and origin of the fossil aquifers, the researchers were able to make recommendations on the sustainability of groundwater resources.

In the central and northern sections of the MAS, sustainable water extraction can be achieved with the current crop and irrigation arrangements by reducing annual extraction and keeping it more in line with the rate at which it is being partially replenished by precipitation. Another option would be to replace the water-intensive crops, such as wheat and alfalfa, that are currently being grown in the area with water-saving crops such as potatoes or sugar beets.

At the current levels of extraction, the southern parts of the MAS can be used for development of sustainable agriculture in Saudi Arabia and provide a replicable and cost-effective model for the area.

The work was funded by the NASA Earth Science Division, the Saudi Geological Survey and the Earth Sciences Remote Sensing Facility at Western Michigan University.