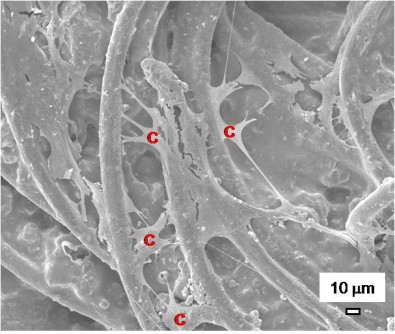 When stem cells (c) are mixed in paste with fibrous scaffold they reach out to attach to fibers. 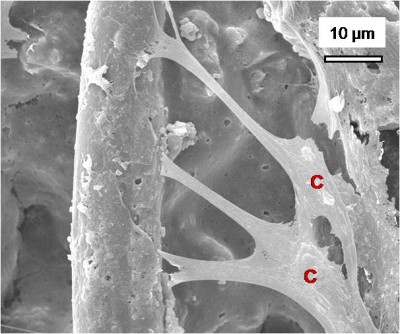 Once attached to the scaffold, the stem cells (c) begin to grow and eventually produce bone tissue. 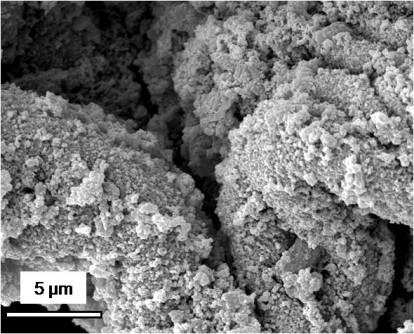 The Dental School presentation showed that human stem cells seeded in a tissue engineering scaffolding exhibited “excellent attachment and osteogenic differentiation,” which is the process of laying down new bone material.

The researchers said the new findings buoy hopes that an injectable paste of stem cells will be available one day to fill any shape of cavity from bone defects, breaks or wounds by regenerating needed bone tissue.

In test tube studies, stem cells from bone marrow, when placed into an injectable scaffold of calcium phosphate and chitosan, started growing and forming minerals needed for new bone tissue.

Xu, an associate professor, is the principal investigator of a $230,000 grant from the Maryland Stem Cell Research Fund for “Stem Cell Delivery via Injectable, Nano-apatite Scaffolds for Bone Engineering,” and a $1.84 million grant from the National Institute of Dental and Craniofacial Research.

The Dental School researchers have so far tested four scaffolding materials for gripping and holding the stem cells. “Which of the materials will be used in a commercial product really depends on where you want to place the material, whether in the jaw bone, the cranium or other bones,” said Weir, a research assistant professor.

Weir said, “Ultimately we want this to be an injectable paste so we can put it into voids that are not square, rectangular or circular, that they are irregular shapes that need to be filled. The paste will include the cells.”

Xu added that such a product could also be used in periodontal bone repair, mandibular and maxillary ridge augmentation, reconstruction of frontal sinus and craniofacial skeletal defects, and other stress-bearing orthopedic applications. After a tumor removal or traffic accident, there may be a need to repair the damage or void left. It will beneficial, he said, to have a paste that can be shaped easily to achieve a high degree of aesthetics. After shaping, the paste hardens to form a solid scaffold full of pores and channels and still containing stem cells throughout, still living and growing to form new bone. Eventually the scaffold material degrades and is replaced entirely by new bone tissue grown from the stem cells.

The researchers found that a significant number of the cells were alive after a few weeks in the scaffolding material. They then discovered that the cells were differentiating into osteoblasts, essentially turning into bone cells. (From Greek words for bone, an osteoblast cell is responsible for bone formation.)

After staining the scaffold, the researchers found the osteoblasts forming “a lot” of the mineral, which then forms the bone after only 21 days, said Weir. In a subsequent experiment, the cells survived even better when mixed in a gel of the scaffolding material.

The researchers have recorded similar success with umbilical cord-derived stem cells, which “appear to be more potent in terms of growth and transforming into osteoblasts on the scaffold than the cells from bone marrow,” said Xu. It is likely that the umbilical cord cells are more vital because they are younger than stem cells obtained from the adult bone marrow and in theory will act more quickly to repair wounds or bone defects.

Xu said that after a literature search, he believes his laboratory is the first to investigate the seeding of umbilical cord-derived stem cells in injectable and load-bearing scaffolding for bone tissue engineering.

“We are excited about the promise of encapsulating umbilical cord stem cells in an injectable scaffold for stem cell delivery and bone regeneration.” Xu said. “Our research is still in an early stage. We will perform more systematic investigations and animal studies. If indeed human umbilical cord stem cells delivered using injectable scaffolds are more effective in bone regeneration than the commonly studied bone marrow stem cells, it will broadly impact the field of stem cell-based regenerative medicine.” 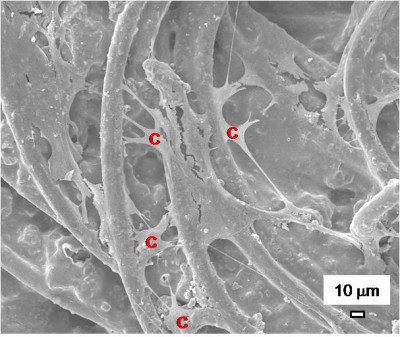 Caption: When stem cells (c) are mixed in paste with fibrous scaffold they reach out to attach to fibers. 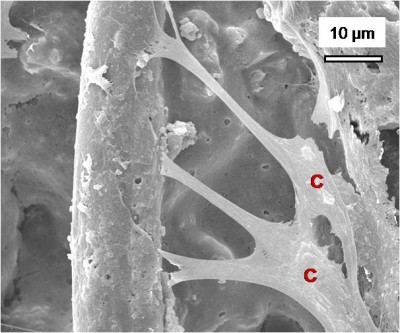 Caption: Once attached to the scaffold, the stem cells (c) begin to grow and eventually produce bone tissue. 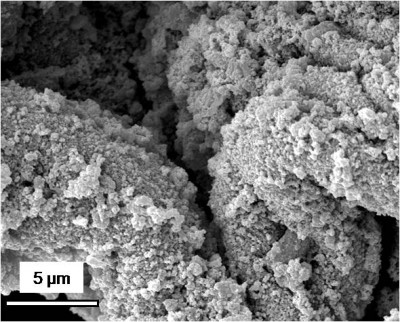