Some Coral Thrive In Acidified Seawater 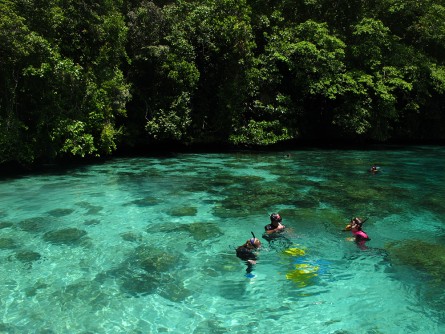 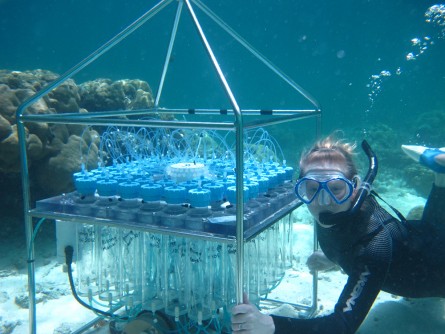 Newswise — Some coral reefs in the Pacific Ocean can not only survive but thrive in waters that have high levels of acidification, according to a Texas A&M University researcher.

Oceanographer Katie Shamberger and colleagues from Woods Hole Oceanographic Institution and the Palau International Coral Reef Center (PICRC) examined coral reefs around the islands of Palau in the western Pacific Ocean. Her findings have been published in Geophysical Research Letters, a publication of the American Geophysical Union.

Shamberger measured the pH levels of seawater on several coral reefs in Palau and found that coral reefs in the Rock Islands of Palau have high levels of acidification that aren’t expected to occur in the open ocean in that region until the end of the century. Contrary to what might have been expected, these reefs appeared to be healthier than nearby reefs in less acidic waters.

“The processes that cause these high levels of acidification in the Rock Islands are completely natural,” Shamberger explains. “The growth of the reef and the breathing of carbon dioxide into the water by organisms on the reef acidifies the water.

“The Rock Islands are a maze of small islands, and the water there tends to ‘linger’ and stay around for a long time before being flushed out,” she notes.

“That allows these natural processes to change the water chemistry on the reef dramatically over time.”

Shamberger said studies show worldwide that the oceans are becoming more acidic. While ocean chemistry varies naturally at different locations, it is changing around the world due to increased levels of carbon dioxide in the atmosphere. The ocean absorbs atmospheric carbon dioxide, which reacts with seawater, lowering its overall pH, and making it more acidic.

“This process also removes carbonate ions needed by corals and other organisms to build their skeletons and shells,” she adds. “Corals growing in low pH conditions, both in laboratory experiments that simulate future conditions and in other naturally low pH ocean environments, show a range of negative impacts. Impacts can include juveniles having difficulty constructing their skeletons, fewer varieties of corals, less coral cover, more algae growth, and more porous corals with greater signs of erosion from other organisms.

“We don’t yet know how the coral communities in Palau’s Rock Islands are able to survive in such high levels of acidification. Is it biological, the perfect combination of environmental factors, or both? We don’t know, and finding out is one of the next steps we take.”

Shamberger found that corals living in the acidified waters were surprisingly diverse and healthy.

Previous work on naturally acidified coral reefs has shown these reefs to have lower coral diversity and sometimes lower coral cover than nearby less acidic reefs, she notes.“In fact, the opposite seems to be true in Palau. The corals seem to be thriving and growing. This area in Palau seems to be the exception of healthy coral communities in acidified waters.

Some coral reefs can be thousands of years old and live in waters 1,500 feet or more below the surface. Coral reefs play a key role in ocean processes and they are one of the most diverse ecosystems in the world, supporting numerous forms of marine life.

The project was funded by the National Science Foundation, the Woods Hole Oceanographic Institution and the Nature Conservancy.

For more news about Texas A&M University, go to http://tamutimes.tamu.edu/ 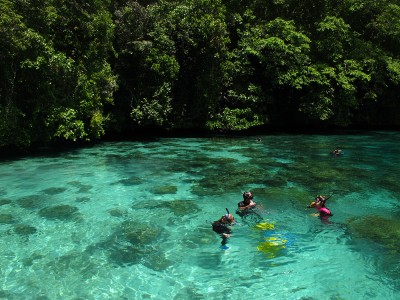 Caption: Texas A&M oceanographer Katie Shamberger (at left) and other researchers prepare to dive to coral beds near Palau 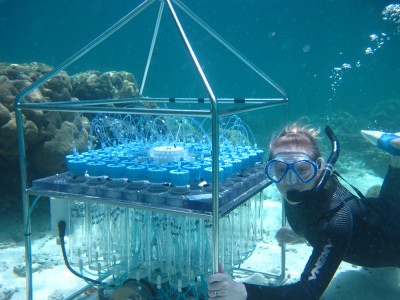