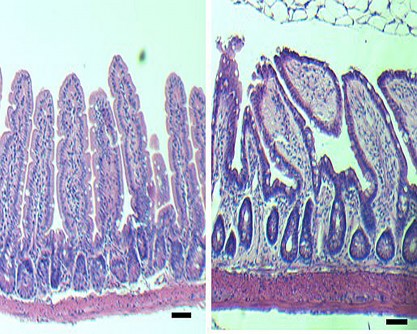 These microscopic images show structural changes in the intestine of an older mouse approaching 2 years of age (right) compared to intestine from a young 2-3 month old mouse (left). The older intestine has a smaller number of intestinal crypts (mucosal glands) that are wider. Researchers report in Cell Reports that intestinal stem cells (ISCs) age along with the animals, causing detrimental changes to intestinal structures and their function. They also show function can be restored by reactivating the signaling of a key molecule lost in aging intestinal stem cells.

Newswise — CINCINNATI – Intestinal stem cells rejuvenate daily so bowels will stay healthy and function normally, but a new study in Cell Reports suggests they also age along with people and lose their regenerative capacity.

Reporting their data online March 14, researchers suggest that reactivating the signaling of a key molecule lost in aging intestinal stem cells could restore healthy intestinal function in older people. The study was conducted in mice and human intestinal organoids by scientists at Cincinnati Children's Hospital Medical Center and the Institute for Molecular Medicine, Stem Cells and Aging at the University of Ulm in Germany.

“Deterioration of Wnt signaling in aging intestinal stem cells may help explain imbalances in food and nutrient absorption in older people, but our paper also shows that biology allows us to reverse this process by restoring Wnt signaling,” said Hartmut Geiger, PhD, senior investigator of the study. “Pharmacologic interventions will still need to be designed based on this finding, but we know now where to start.”

Geiger is a member of the Division of Experimental Hematology and Cancer Biology at Cincinnati Children’s.

In tests that compared the intestines of young mice (2 to 3 months old) with those of aged mice (approaching 2 years old), researchers noticed significant differences in the structural architecture of intestine.

Intestines from older mice showed a reduced number of crypts (mucosal glands), and the structures were longer and wider than in younger animals. Older intestines also had longer villi (absorptive tissues) and an elevated number of cells. But the researchers also noticed there were fewer numbers of actively dividing cells in the intestines of the older mice.

Study authors then looked for different characteristics in the ISCs of young and old mouse intestines. Although they did not observe differences in the numbers of ISCs, they did see a decreased presence of molecular markers that denote ISC function. This led them to conclude that ISC function diminishes in older intestines.

Finding WntTo identify genetically driven molecular processes that prompt aging and diminished function in ISCs (and in Paneth and goblet cells they form) the researchers subjected ISCs to RNA sequencing analysis. These tests showed significant reductions in gene expression in the older cells, including the down regulation of molecular pathways involving the genes PPAR, SMAD and Wnt.

Because Wnt plays a particularly prominent role in regulating ISCs, the researchers focused on this pathway. In young and old mice they tested the presence and strength of the Wnt signaling pathway in cells of the mesenchyme – which forms connective and skeletal tissues. The mesenchyme has recently been identified in other studies as providing a supportive environment for ISCs to form.

The authors also tested Wnt signaling in different intestinal cells from young and old mice, specifically goblet and Paneth cells that secrete proteins and antimicrobial peptides that are important to sustaining healthy intestines. In both instances they observed a decline in Wnt in intestinal tissues from the older animals.

In testing on lab-generated human and mouse intestinal organoids, the researchers also observed declines in Wnt signaling in older intestines along with altered intestinal structures and indications of diminished function.

Molecular restorationResearchers concluded their study by testing the restoration of Wnt signaling in intestines by adding Wnt3a (an inducer of Wnt signaling) in aged mouse and human organoid models, which were generated with donated human cells. This rejuvenated the regenerative potential of ISCs in the mouse and human modeling systems. It also boosted the generation of Paneth and goblet cells and prompted an increase in the number of intestinal crypts and other critical structures.

The scientists are following up the current study by trying to define the extent to which therapeutic intervention to rejuvenate ISCs might be beneficial to humans.

Collaborating on the study along with first author Kodandaramireddy Nalapareddy, PhD, a member of the Geiger lab, was an interdisciplinary team of researchers from the Cincinnati Children’s divisions of Pathology; Laboratory Medicine; Pulmonary Biology; Pediatric General and Thoracic Surgery; Gastroenterology, Hepatology and Nutrition; the Perinatal Institute; and the University of Cincinnati.