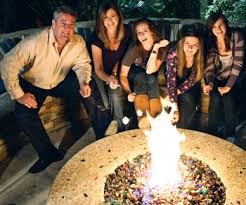 Newswise — MAYWOOD, Ill. (June 24, 2014) – Summer means cooking out and gathering with friends and family around the fire pit or campfire. It also means a seasonal increase in trips to the emergency department and burn unit for burn injuries.

“The old adage of ‘When you play with fire, you get burned’ is true – you must always be very serious and attentive when fire is involved,” says Richard L. Gamelli, MD, director of the Burn & Shock Trauma Research Institute, director of the Burn Unit at Loyola University Medical Center. Dr. Gamelli also is senior vice president and provost of the Health Sciences Division at Loyola University Chicago. ”Injuries due to fire happen easily and fast, especially when children are involved or alcohol has been abused.”

According to the American Burn Association, in 2013:• 450,000 people sought medical treatment for burn injuries • 3,400 deaths were attributed to fire/burn and/or smoke inhalation• 40,000 people were hospitalized due to burn injuries

“Young children are among the most vulnerable and often get burned by putting their hands on the side of cooking grills.” says Dr. Gamelli, who serves as president of the International Society for Burn Injuries. “Children should be kept well away at all times from the cooking area and always be watched closely even after the cooking is done – the grill is still hot.”

According to the Centers for Disease Control and Prevention (CDC), burns and fires are the third leading cause of death in the home. In 2010, a fire-related death occurred every 169 minutes. A fire injury occurred every 30 minutes.

“At Loyola, we have had patients who got burned after contact with a log from the previous night’s fire, thinking the fire was out,” said Dr. Gamelli. “Fire can burn for hours after ignition and the temperature can remain dangerously hot.”

When using a fire pit, barbecue or campfire this summer, Dr. Gamelli offers these safety tips:• Keep an eye on anything that burns.• Keep children and pets away from the cooking area and supervise them around recreational fires.• Place the barbecue, fire pit or campfire in an open area away from all walls, fences or other structures, especially wooden construction that can ignite.• Never burn anything in, on or under a garage, breezeway, carport, porch, deck or any other structure that can catch fire.• Keep a fire extinguisher close at hand and be familiar with how to operate it.• If you do burn yourself, or someone else is burned, seek immediate medical attention.• Do not abuse alcohol while around fire.• Place a metal cover over a burning fire pit to contain embers.• Never leave a fire burning unattended.• Coals and logs can burn and stay hot a long time – do not kick them or touch them and cover them to protect others from accidental contact.

“Whether a campfire, a fire pit or a barbecue grill, you should always take extreme care when using devices that have the potential to cause great harm to yourself and others if used in a careless, irresponsible manner,” says Dr. Gamelli.

Loyola’s Burn Center is one of the busiest in the Midwest, treating nearly 600 patients annually in the hospital and another 3,500 patients each year in its clinic. Dr. Gamelli and his team conduct ongoing research to advance the care of burn patients.