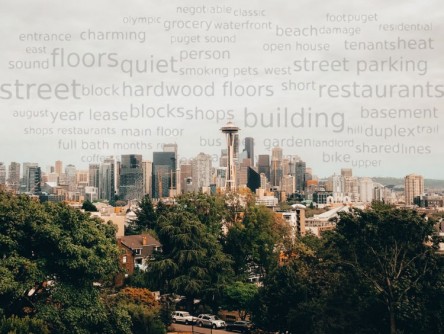 These word clouds show the frequency of certain terms from rental listings, based on the demographics of the neighborhood. 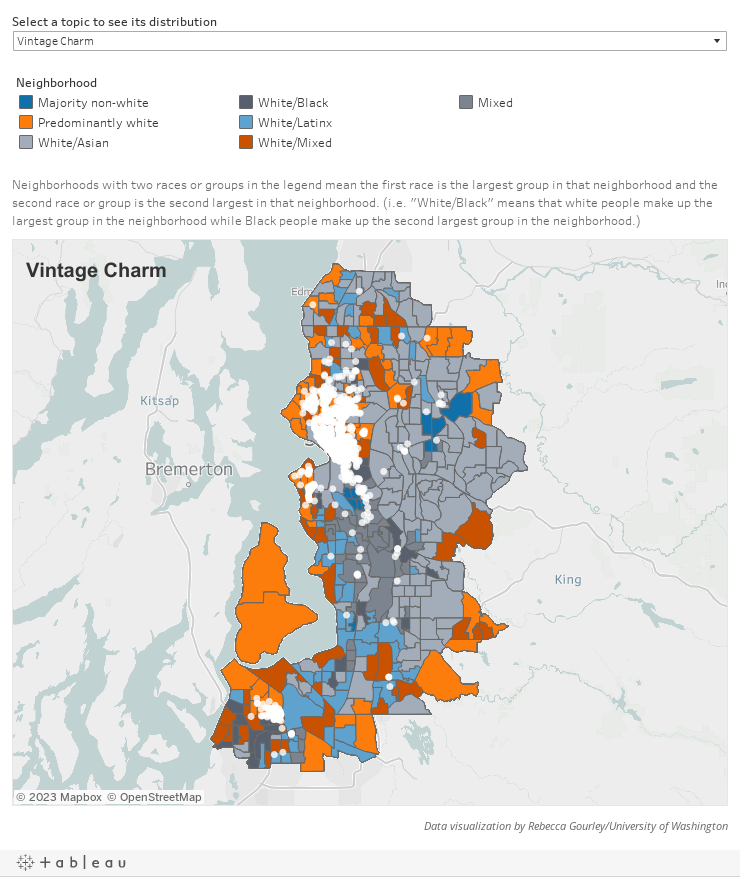 In this interactive map, users can choose topics from a dropdown menu to see where those terms appear most frequently in Seattle-area rental ads.

Newswise — A new University of Washington study of thousands of local rental ads finds a pattern of “racialized language” that can perpetuate neighborhood segregation, using specific terms to describe apartments in different areas of town.

Terms like “convenient” and “safe and secure” are more common in neighborhoods with a greater proportion of people of color, while “vintage” and “classic” are more popular in predominantly white neighborhoods.

“When you’re looking at racial segregation, we all make housing choices, and those choices we make affect segregation. We should know if we’re making choices based on racialized discourse,” said Ian Kennedy, a graduate student at the UW and lead author of the study. “A racialized society can be perpetuated through means that aren’t clearly conscious.”

The findings don’t mean the ads are overtly, or even intentionally, racist, Kennedy said. Rather, words and phrases – certain terms common to some neighborhoods, and certain terms for others – can reinforce perceptions of neighborhoods, influence where people choose to live, and ultimately, create areas of the city where some racial and ethnic groups are more prevalent than others.

The study published Aug. 3 in the journal Social Forces.

Past research has documented segregation in Seattle, and the legacy of redlining in some neighborhoods. Through the mid-20th century, real estate and rental ads identified properties in “restricted” areas – those with covenants designed to keep out people of color. The Fair Housing Act of 1968 prevented such discrimination in housing, and by 1970, overtly race-related language in local housing ads had essentially disappeared. But by then, as is the case elsewhere in the country, geographic and demographic patterns had been cemented, and less-explicit forms of discrimination continued.

Given Seattle’s economic and population growth in recent years, Kennedy wanted to examine the factors that could sustain some of the de facto segregation that exists today. Seattle has grown by more than 130,000 people since 2010, and people new to the area may have little information about specific neighborhoods.

For this study, Kennedy and the research team started with more than 400,000 Craigslist ads for the Seattle-Tacoma-Bellevue area between March 2017 and September 2018. Removing duplicate ads cut the database to about 45,000 from nearly 850 census tracts; data from the Census Bureau’s American Community Survey established the racial and ethnic breakdown of each tract.

Kennedy used an approach called topic modeling to recognize groups of words appearing together, and categorized those groups into 40 topics. For example, the topic “vintage charm” typically included words like “vintage,” “classic” and brick.” The topic of “convenience and ease” included terms such as “easy,” “convenient,” “location” and “open.”

Kennedy was then able to spot patterns between the terms in the ads, and the neighborhoods the ads were tied to.

Topics such as “vintage charm” and those related to walkability and surrounding amenities were associated more frequently with predominantly white neighborhoods in Seattle, such as Wallingford and Queen Anne. In neighborhoods with a greater proportion of people of color, such as Seattle’s Northgate and in Kent, topics like “safe and friendly” and those pertaining to drive times and bus access were common. In particular, terms related to security – “safety,” “secure,” “controlled,” “courtesy patrol” – were associated more frequently with neighborhoods with a higher proportion of Black residents.

“These associations are sadly aligned with what we know about racial stereotypes in the United States,” Kennedy said. “We’re worried that, in addition to influencing housing patterns, that these ads could also be a site for the reproduction of racial stereotypes.”

A general theme emerged, Kennedy said: Listings in predominantly white neighborhoods highlighted history, culture and community. In neighborhoods that had a greater proportion of people of color, listings focused more often on features that separate the property from its surroundings, or simply on transportation out of the area.

The goal of rental ads, of course, is to occupy the unit, Kennedy said, so listings try to highlight what will draw a tenant; reversing perceptions and patterns requires a more systemic effort to discourage segregation. The study notes how the Chicago suburb of Oak Park took a proactive approach to integrating its community by promoting a variety of neighborhoods and working with real estate agents, landlords and prospective tenants on changing perceptions.

The study was funded by the National Science Foundation. Co-authors were Amandalynne Paullada, a doctoral student in linguistics at the UW; Chris Hess of Cornell University; and Sarah Chasins of the University of California, Berkeley.

Caption: In this interactive map, users can choose topics from a dropdown menu to see where those terms appear most frequently in Seattle-area rental ads.

In the Home Race and Ethnicity All Journal News