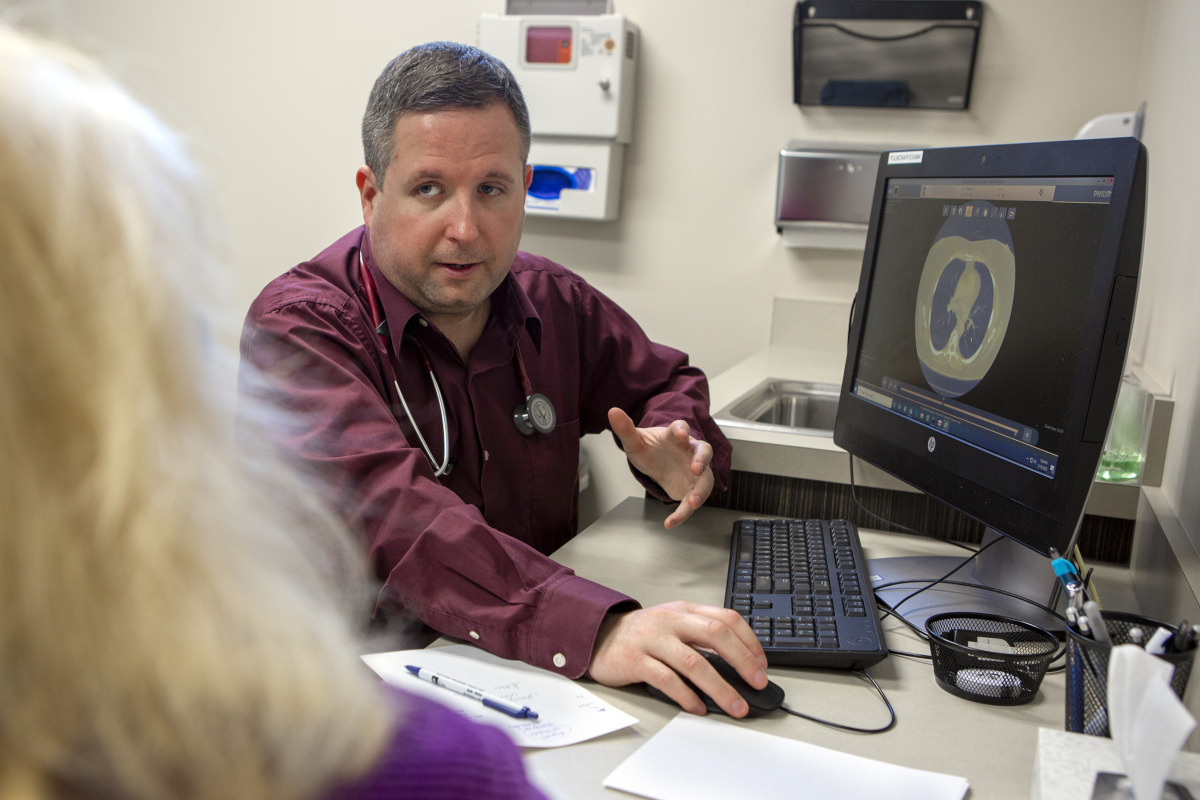 Dr. Christopher Shaffer, a pulmonary and critical care physician with Penn State Health Pulmonary Medicine, speaks with a patient. (This image was taken prior to March 2020 and the enactment of protocols related to COVID-19.)

Newswise — Often called a “spot on the lung,” a pulmonary nodule is an area that appears as a round, white mark on a CT (computed tomography) scan. While most nodules are harmless, in some cases they may be malignant. Because early detection and treatment of lung cancer can significantly increase the chances of survival, it is important to see a pulmonologist for an evaluation of any newly discovered nodule.

A majority of nodules are found in an X-ray or CT scan that was ordered for an unrelated complaint. “If you’re told you have a nodule on your lung, don’t panic,” said Dr. Christopher Shaffer, a pulmonary and critical care physician with Penn State Health Pulmonary Medicine, with locations in Lemoyne and Carlisle. “Many people have them and most of the time, they’re harmless and don’t need to be removed.”

Nodules can be an area of inflammation, scar tissue or cancer. A pulmonologist will meet with the patient, take a medical history, conduct a physical exam and determine whether the individual is at a higher risk for lung cancer — such as having a history of excessive smoking. The doctor will also study the CT scan to determine the size of the nodule.

“If it’s small, we’ll follow it over time to see if it grows, remains the same size or goes away,” said Dr. Joshua Hoffman, a pulmonary and critical care physician with Penn State Health Pulmonary Medicine. “Inflammation tends to go away over time. Scar tissue usually remains unchanged. And we know that lung cancer does one thing really well — it grows.”

Nodules that are benign tend to be small and have smooth edges. The pulmonologist will order a follow-up CT scan to be taken three, six or 12 months later — depending upon the size and appearance of the nodule — and compare the new image to the earlier one. “That will allow us to see subtle changes in size that will either raise or lower our suspicion that it’s lung cancer,” Hoffman said.

If the nodule hasn’t gone away during the time period between the first and second set of CT scans, the pulmonologist will look to see if it is stable. “If it hasn’t grown, then that lowers our suspicion that it might be cancer,” said Hoffman, who with Shaffer runs a weekly clinic and multidisciplinary conference at Penn State Health Pulmonary Medicine dedicated solely to the management of pulmonary nodules. “We’ll do another CT chest scan 12 or 18 months later to make sure there’s long-term stability.”

If the nodule increases in size from the initial discovery to the follow-up scan, doctors will consider a biopsy. “There’s no way to say definitively that it’s lung cancer without one,” Hoffman said. “Until the biopsy, we’re just suspicious.”

Malignant nodules are typically removed by a thoracic surgeon through a minimally invasive surgical procedure called a VATS resection. “These are very localized cancers that we can go in and remove easily,” Hoffman said. For larger nodules, surgeons may have to remove more of the surrounding lung tissue and patients may also receive chemotherapy.

Patients who aren’t surgical candidates due to their health or the size or location of the nodule will receive radiation therapy. Depending on the stage of their cancer when they’re diagnosed, they may also receive chemotherapy.

While most nodules are discovered incidentally, pulmonologists do order low-dose CT scans — scans using 5 times less radiation than traditional CT scans — to look for nodules in individuals at high risk of developing lung cancer. These scans can catch a nodule the size of a grain of rice, whereas X-rays won’t typically show one smaller than a dime.

“We routinely pick up lung cancer much earlier when we’re looking at the asymptomatic patient who has risks,” Shaffer said. “Lung cancer screening really does save lives.”

The American Cancer Society recommends annual cancer screenings with low-dose CT scans for those who are between 55 and 77 years old, are current smokers or who have quit within the past 15 years, and who smoked the equivalent of two packs per day for 15 years or one pack a day for 30 years.

“For people who were prior smokers or who currently smoke, I’d advise them to follow the lung cancer screening guidelines,” Shaffer said. “If they meet the criteria for being at high risk, the CT scans are covered by insurance as preventative medicine. And if they are unfortunate enough to develop lung cancer but we can catch it early, it’s very treatable — and even curable.”

Early-stage, localized lung cancer in the form of small nodules has no symptoms. Once advanced, lung cancer can cause a persistent, unrelenting cough; coughing up blood; and persistent chest pain that isn’t otherwise explained.

“If we don’t catch lung cancer until later, when a patient is showing symptoms, it’s going to be a lot harder to achieve a good outcome,” said Shaffer.