The Tragedy of the Commons – Minus the Tragedy 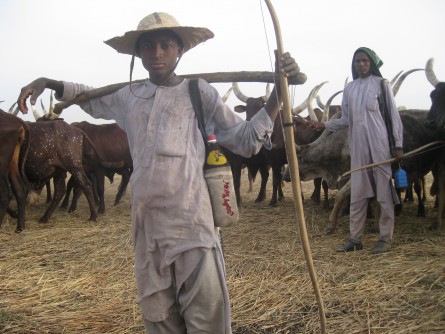 Pastoralists in Cameroon, the focus of research by Mark Moritz of The Ohio State University.

Newswise — COLUMBUS, Ohio – Sometimes, there is no “tragedy” in the tragedy of the commons, according to a new analysis that challenges a widely accepted theory.

Scientists have long believed that when there is open access to a shared resource, people will inevitably overuse it, leading to ruin for everyone – an idea known as the “tragedy of the commons.”

But in an analysis of eight case studies from around the world – from foragers in Australia to mangrove fishers in Ecuador – researchers found that people can successfully share and sustainably use resources, under certain conditions.

“We’ve been told that if there is open access, then there must be tragedy, but that’s simply not true,” said Mark Moritz, lead author of the paper and associate professor of anthropology at The Ohio State University.

“We’ve been blinded by the theoretical models. Using a new approach has helped us see from a different perspective.”

The paper was published today (11-26-18) in the Proceedings of the National Academy of Sciences.

The classic example of the tragedy of the commons is shepherds who share an open pasture.  Each shepherd adds to the number of animals he has, because use of the grazing land is free.  But the result is that the land is overgrazed, leaving it ruined for everyone.

But Moritz knew from his own research that this tragedy is not inevitable.  He studies pastoralists in Cameroon for whom “keeping livestock is a way of life for them, as well as a way to make a living,” he said.

They live nomadically, seasonally moving cattle from place to place, sharing the grazing land but not depleting the resources.

In the PNAS paper, Moritz and his colleagues compared the cases they knew, which have been studied ethnographically for decades and for which they had long-term social and ecological data.

They found that the successful case studies worked as complex adaptive systems, where interactions between social and ecological processes lead to sustainable outcomes.

Successful systems were self-organizing, resulting in efficient, equitable and sustainable resource use.

While open access implies no rules, Moritz said there actually are rules. People usually need to ask permission from current users to use a resource, such as grazing land.  But permission is almost always granted.

The researchers found that to avoid the tragedy of the commons, people have to use the environmental resources appropriately.  In Cameroon, that means pastoralists move their cattle in response to seasonal rains that bring the grasses on which their animals feed.

“The inappropriate way to use the resources would be to put up a fence and keep the animals there throughout the year, even during periods when there is no rain and the grass isn’t growing,” Moritz said.

That’s why freedom of movement is one of the key conditions necessary to successfully share resources. Other necessary conditions include low population densities, low market value of the resources, variability in resource distribution and an ethos of sharing.

The researchers say that where the conditions are right for successful and sustainable use, there is no need to “manage” the resources, Moritz said.

“The standard approach is to protect the resource.  But you can’t see the resource in isolation.  We have to look at the social-ecological system as a whole,” he said.