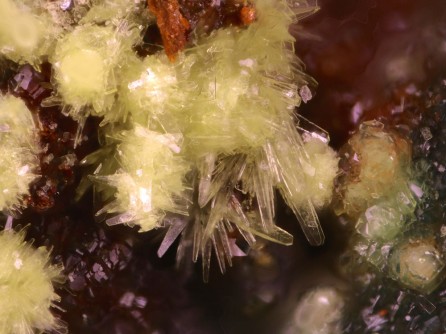 The mineral crystals of leószilárdite are only a couple millimeters long at most. 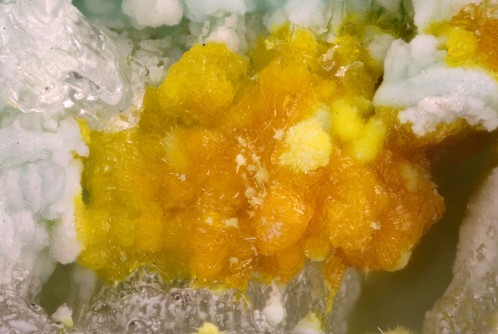 Uranyl minerals have distinct bright colors even after the uranium-rich ore interacts with air and water to form crusts like leesite. 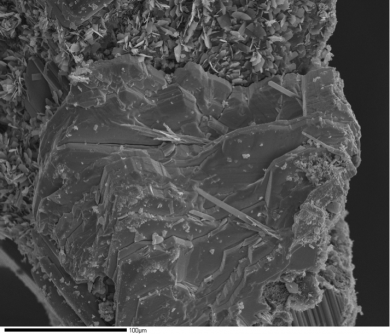 A scanning electron microscope reveals the individual shape of crystals in a small aggregate of leesite. 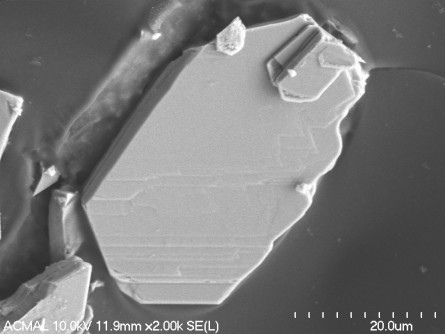 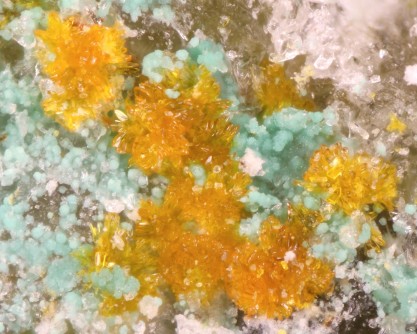 Manganese and ammonium give redcanyonite a darker color than the other minerals discovered by Olds.

Newswise — Leesite, leószilárdite and redcanyonite are three new uranyl minerals discovered found on the walls of old uranium mines in southern Utah. An alumnus of Michigan Technological University discovered them.

"Have you ever seen the Hills Have Eyes? It's that kind of creepy, barren desert landscape," says Travis Olds '12, now a graduate student at Notre Dame studying uranyl mineral compounds. He adds that he and others find mineralogy so exciting because of "the idea that there are things we still don't know—and someone can see a pretty crystal and appreciate it."

Olds specifically studies uranyl minerals because, as radioactive materials, it is important to know where they are found and how they change in different environments. He characterized leesite, leószilárdite and redcanyonite along with a small team including alumnus Shawn Carlson '91 and staff scientist Owen Mills '08 who runs the Applied Chemical and Morphological Analysis Lab (ACMAL) at Michigan Tech.

Everyone is familiar with rust; in mineral-speak, rust is an iron oxide or oxyhydroxide, which means it's a secondary mineral formed by the interaction of air and water. These three yellow minerals are like uranium rust and while the glowing green stereotype of uranium is close it's not quite right.

Though small and barely visible to the naked eye, leesite occurs in bright yellow aggregates of stacked blades or radiating needles up to one millimeter in length. The mineral also forms powdery masses nestled against a backdrop of companion minerals, most notably gypsum. Leesite's atom arrangement stacks in alternates of uranium and oxide layers, and potassium is what sets it aside as a new mineral. Given its chemistry and structure, it's a member of the schoepite mineral family; miners called the general mess of these minerals growing on the tunnel floors "gummites."

Leószilárdite is pale yellow. A carbonate formed through uranium ore interacting with air, it's also water soluble. Its most distinctive feature are bladed crystals.

"If you look at leószilárdite in a picture, you can kind of pick out that they have an unusual shape," Olds says. "But put them under the SEM (scanning electron microscope) and it's obvious."

Olds says leószilárdite is a particularly interesting find because of the Carbon Mineral Challenge. The challenge runs through September 2019, with the goal to discover as many new carbon-based minerals as possible. The Deep Carbon Observatory, the organization leading the project, predicts there are still at least 145 unknown carbon minerals. Leószilárdite is one of eight discovered and officially recognized by the International Mineralogical Association since December 2015.

The final mineral is named for the area where these rare minerals are found. Redcanyonite varies in hue from orange to red-orange and the color comes from what chemically makes the mineral new—manganese and ammonium in its structure—and being a sulfate, it is not soluble in water, unlike leószilárdite.

Redcanyonite is one of the rarest uranyl minerals known because it can only grow within narrow constraints: access to manganese ions is the main driver, but it also can only form in organic-rich layers, the most likely source of ammonium.

All three specimens represent a small and unique slice of the earth's crust where human activity spurred the formation of previously unknown minerals.

"The only way to better understand the chemistry of uranium is to go out and find new minerals—and describe their topology, their structures," Olds says. "They teach us a lot about how uranium can then be moved in the environment."