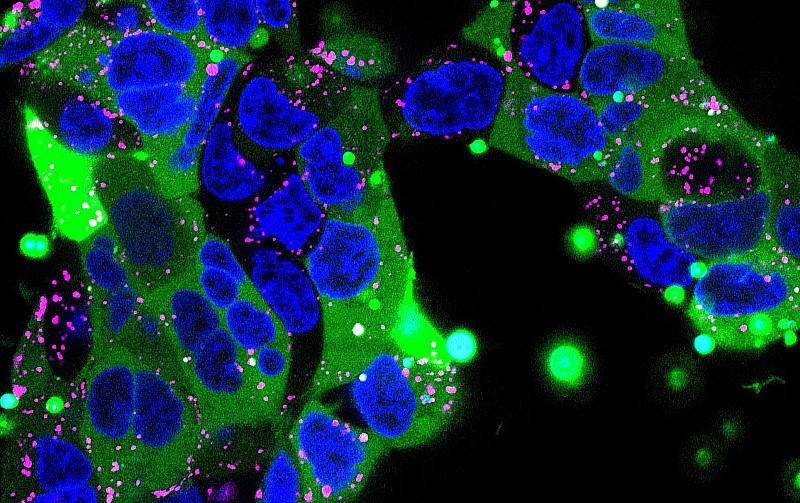 Human immunoglobulin protein labeled with a green fluorescent protein was encapsulated in a nanoparticle and delivered into cultured human kidney cells. The immunoglobulin was distributed throughout the cytoplasm of the cells (green) while avoiding the protein degrading endosomes (pink).

Newswise — Promising intracellular protein-based therapeutics have been of limited use due the difficulty of getting these molecules through the bloodstream and into the diseased cells. Now bioengineers have developed nanoparticles that can encapsulate and deliver protein-based therapeutics to their targets—avoiding degradation and toxic interactions with healthy tissues.

The research was led by Jordan Green, Ph.D., Professor of Biomedical Engineering, Ophthalmology, Oncology, Neurosurgery, Materials Science & Engineering, and Chemical & Biomolecular Engineering at the Johns Hopkins University School of Medicine and is reported in the December issue of Science Advances1.

“A drug only works if it can reach the site of disease,” explained David Rampulla, Ph.D., director of the NIBIB program in Drug Delivery. “Some of the new large protein-based drugs can be inactivated by degradative enzymes in the bloodstream. Others, such as monoclonal antibodies for inflammatory diseases, can cause side effects due to damaging interactions with healthy tissues. So, a critical part of developing new medicines is also developing the method of delivering the drug to the target tissue.”

The strategy of the Hopkins group was to build tiny molecular shuttles, or nanocontainers, capable of avoiding extracellular hazards, penetrating into the specific cell type, and then releasing the encapsulated protein-based drug into the cytosol of the target cell.

The team used polymers to fabricate the nanocontainers. Polymers are branching molecules made up of large numbers of identical or similar units. By tweaking their chemical properties, the team created a set of polymers that intertwined with each other. Further chemical modifications caused the polymers to capture and encapsulate whatever large-protein cargo was added. Yet another chemical tweak put positive charges on the outside of the nanoshuttles so they would bind to the negative charge found on the surface of cells.

For a first test, the team added to the polymer mix a relatively small protein that glows green and then added it to kidney cells growing in a laboratory culture dish. As the scientists had hoped, the particles stuck to the cells, were pulled inside, and efficiently released the protein cargo inside the cytosol of the cells, demonstrated by the presence of the green glowing protein distributed throughout the cells. Tests with a much larger human immunoglobulin protein yielded similar results—the nanocontainer successfully carried the immunoglobulin into the kidney cells.

“Testing transport of an immunoglobulin was done to mimic the transport of monoclonal antibodies, which are biologicals used to treat a variety of diseases,” explained Green. “Though it’s an early result in cultured cells, it is a good indication that our nanoshuttles could be used to get these large biologicals inside of cells where they would be most effective and less likely to cause unwanted side effects.”

Given the goal of delivering such drugs in humans, the team moved to tests in a mouse model of brain cancer. This time the nanocontainer was loaded with therapeutic proteins and nucleic acids that make up what is known as the CRISPR gene editing system and injected into the mice. The CRISPR system is able to target specific genes in a cell that are causing disease. The CRISPR complex identifies the problem genes and splices them out of the genome—deactivating them. The system can splice in new genes when it splices out the harmful genes, so the researchers added a gene that makes a protein that glows red if it is successfully spliced into cellular DNA.

Following injection into the mouse brain cancer cells, the researchers observed the red glowing protein around the area of injection, indicating that the nanoshuttle successfully delivered the CRISPR system into the cells and it was able to function normally in the cancer cells adjacent to the injection site.

Encouraged by these initial results Green and his colleagues are now working on additional modifications to the nanoshuttle polymers to enable them to be injected into the bloodstream and move through the circulatory system, ultimately binding to specific target cells to deliver their therapeutic cargo.