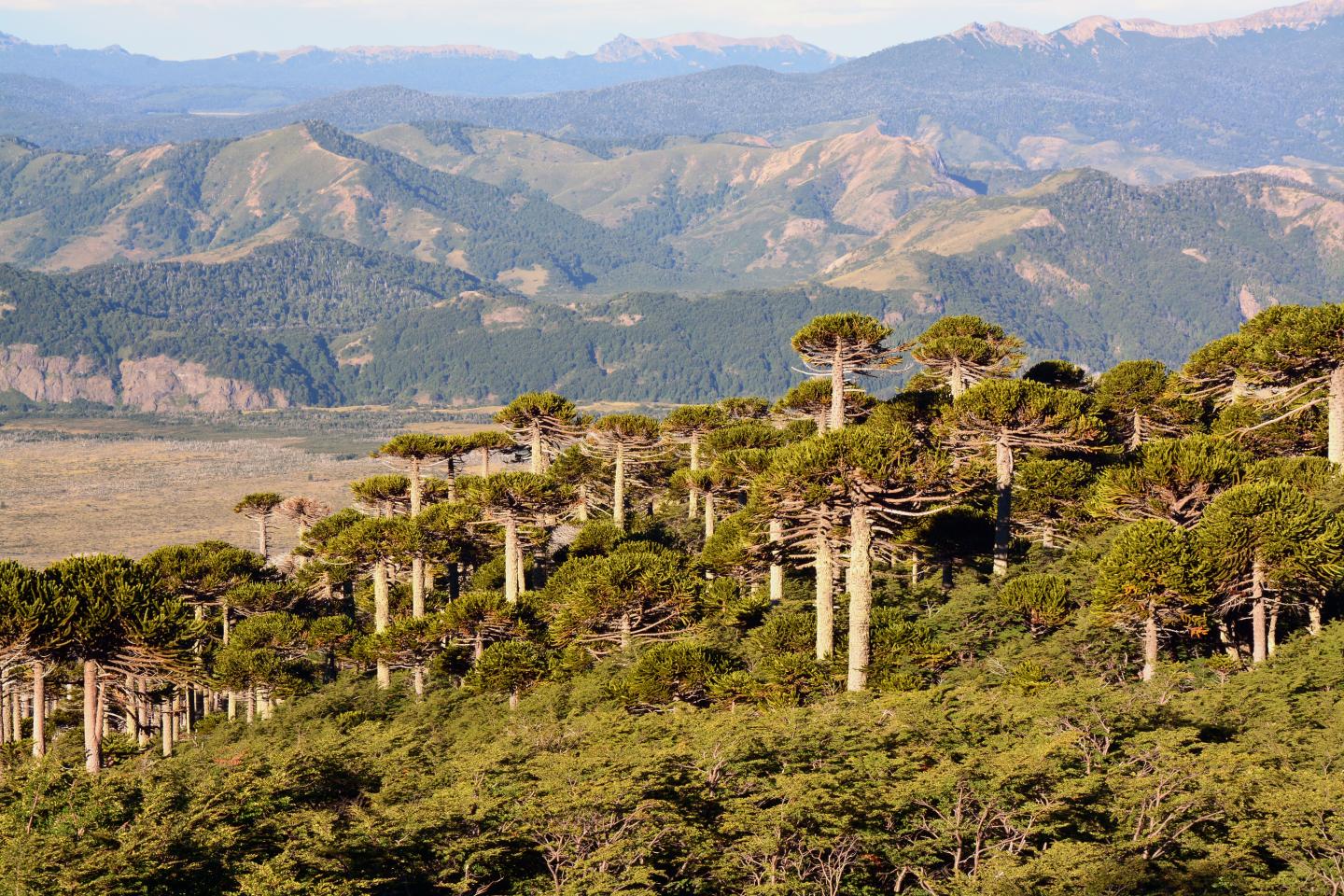 Ricardo Villalba, Argentine Institute of Snow, Glacier and Environmental Sciences, at the National Research Council for Science and Technology

Araucaria araucana trees in northern Patagonia, Argentina, some of which were used in the study. Some trees can live 1,000 years. 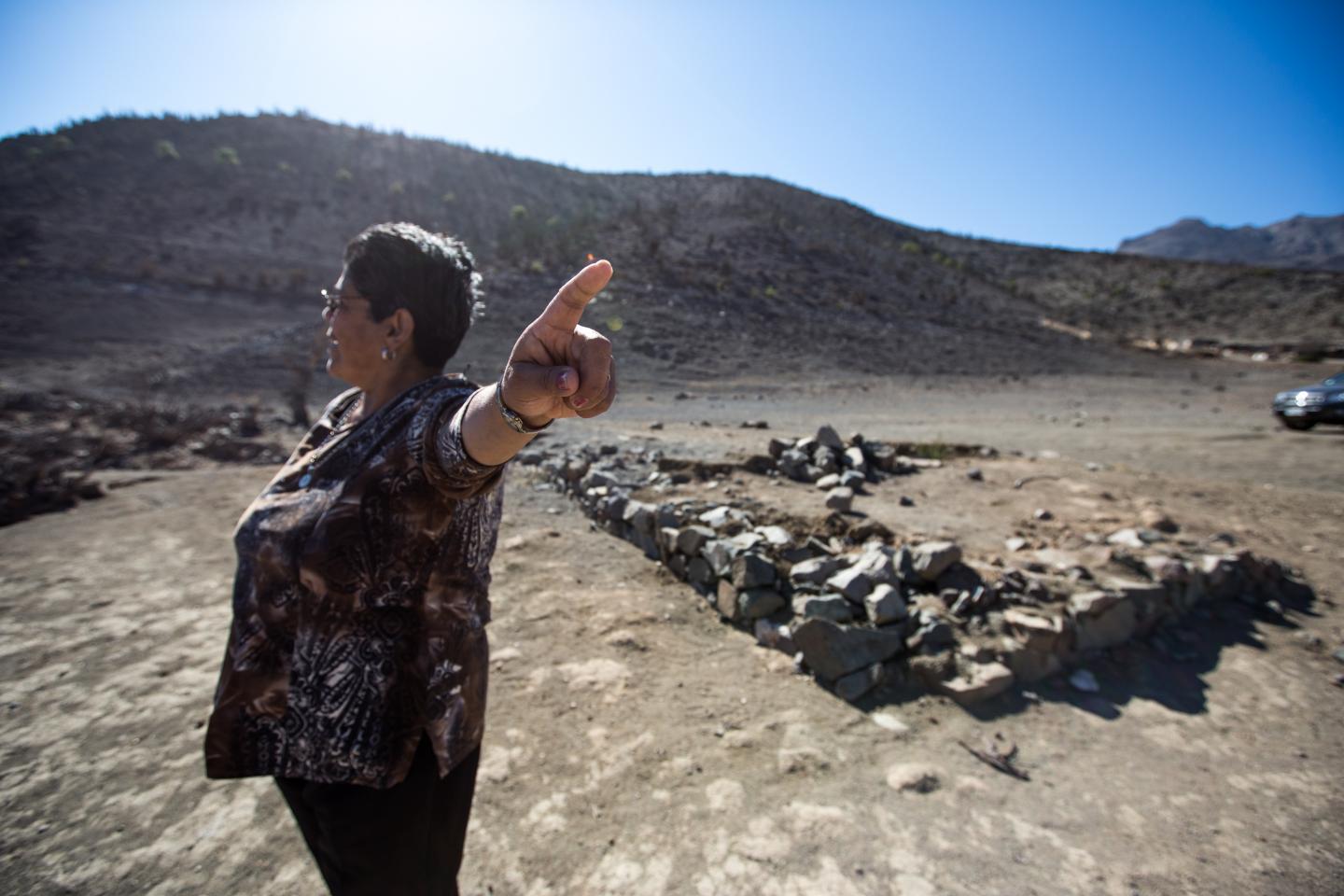 A continuing decade-long drought has hit much of Chile and western Argentina. Here, Natalia Edith Codoceo Flores amid the ruins of the Chilean village of Gualliguaica, which was flooded by a new reservoir in the 1990s; the water has now almost entirely receded. 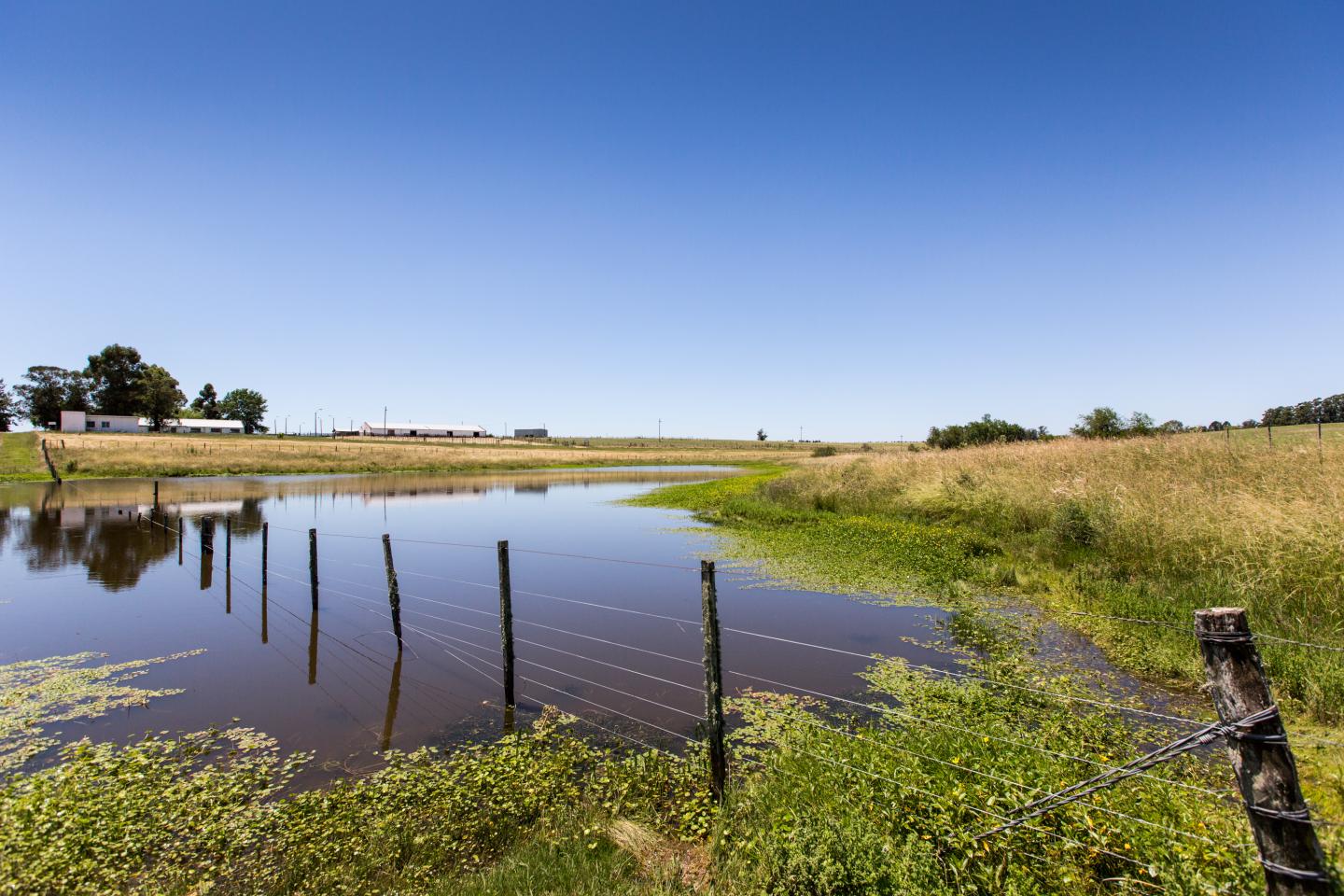 At the same time western regions of the continent are suffering drought, parts of the east are seeing extreme rainfall. Here, flooded pasture outside Las Brujas, in southern Uruguay.

Newswise — Scientists have filled a gaping hole in the world's climate records by reconstructing 600 years of soil-moisture swings across southern and central South America. Along with documenting the mechanisms behind natural changes, the new South American Drought Atlas reveals that unprecedented widespread, intense droughts and unusually wet periods have been on the rise since the mid-20th century. It suggests that the increased volatility could be due in part to global warming, along with earlier pollution of the atmosphere by ozone-depleting chemicals. The atlas was published this week in the journal Proceedings of the National Academy of Sciences.

Recent droughts have battered agriculture in wide areas of the continent, trends the study calls "alarming." Lead author Mariano Morales of the Argentine Institute of Snow, Glacier and Environmental Sciences at the National Research Council for Science and Technology, said, "Increasingly extreme hydroclimate events are consistent with the effects of human activities, but the atlas alone does not provide evidence of how much of the observed changes are due to natural climate variability versus human-induced warming." The new long-term record "highlights the acute vulnerability of South America to extreme climate events," he said.

Coauthor Edward Cook, head of the Tree Ring Lab at Columbia University's Lamont-Doherty Earth Observatory, said, "We don't want to jump off the cliff and say this is all climate change. There is a lot of natural variability that could mimic human-induced climate change." However, he said, armed with the new 600-year record, scientists are better equipped to sort things out.

The South American Drought Atlas is the latest in a series of drought atlases assembled by Cook and colleagues, covering many centuries of year-by-year climate conditions in North America; Asia; Europe and the Mediterranean; and New Zealand and eastern Australia. Subsequent studies building on the atlases have yielded new insights into how droughts may have adversely affected past civilizations, and the increasingly apparent role of human-induced warming on modern climate. Most recently, followup analyses of North America have suggested that warming is driving what may be the worst-ever known drought in the U.S. West.

The new atlas covers Argentina, Chile, Uruguay, Paraguay, most of Bolivia, and southern Brazil and Peru. It is the result of years of field collections of thousands of tree-ring records, and subsequent analyses by South American researchers, along with colleagues in Europe, Canada, Russia and the United States. Ring widths generally reflect yearly changes in soil moisture, and the researchers showed that collected rings correlate well with droughts and floods recorded starting in the early Spanish colonial period, as well as with modern instrumental measurements. This gave them confidence to extend the soil-moisture reconstruction back before written records.

The authors say that periodic natural shifts in precipitation are driven by complex, interlocking patterns of atmospheric circulation on land and at sea. One key factor: low-level westerly winds that blow moisture onto the continent from the Pacific. These are controlled in part by periodic cyclic changes in sea-surface temperatures over both the Pacific and the Atlantic, which can bring both droughts and wet periods. The authors say greenhouse-gas-driven shifts in these patterns appear linked to a still continuing 10-year drought over central Chile and western Argentina that has caused severe water shortages, along with heavier than normal rains in eastern regions.

Precipitation is also controlled in part by the Southern Annular Mode, a belt of westerly winds that circles Antarctica. This belt periodically contracts southward or expands northward, and when it contracts, it weakens the westerly winds that bring rain to South America. In recent decades, it has been stuck in the south -- largely a result of ozone-depleting chemicals used in 20th-century refrigerants that destroyed atmospheric ozone over Antarctica, scientists believe. The chemicals were banned in the 1980s, but their effects have persisted.

The third major factor is the so-called Hadley cell, a global phenomenon that lofts warm, moist air from near the equator and sends it further north and south, dropping precipitation as it goes. The air settles near the surface at predictable latitudes, by which time the moisture has been largely wrung out; this creates the permanently dry zones of the subtropics, including those in South America. During recent decades, the Hadley cell has expanded towards the poles, likely in response to human-induced climate changes; this has shifted rainfall patterns and broadened the subtropical dry zones, especially in the Southern Hemisphere.

The atlas indicates that there has been a steady increase in the frequency of widespread droughts since 1930, with the highest return times, about 10 years, occurring since the 1960s. Severe water shortages have affected central Chile and western Argentina from 1968-1969, 1976-1977, and 1996-1997. Currently, the drylands of central Chile and western Argentina are locked in one of the most severe decade-long droughts in the record. In some areas, up to two-thirds of some cereal and vegetable crops have been lost in some years. This threatens "the potential collapse of food systems," says Morales.

At the same time, southeastern parts of the continent are seeing heavier than normal rains. Walter Baethgen, who leads Latin American agricultural research for Columbia University's International Research Institute for Climate and Society, says his own studies show that the La Plata basin of Uruguay has seen more frequent extremely wet summers since 1970, with corresponding increases in crop and livestock production. But the frequency of very dry summers has remained the same, which translates to bigger losses of expected yields when they do come along, he said.

"Everything is consistent with the idea that you'll be intensifying both wet and dry events with global warming," said Jason Smerdon, a climate scientist at Lamont-Doherty and a coauthor of the study.

Using newly developed tree-ring records from Peru, Brazil, Bolivia and Colombia, the group is now working to expand the atlas to cover the entire continent, and extend the climate reconstruction back 1,000 years or more, said Morales.

The authors wish to dedicate the study to the memory of the late María del Rosario Prieto, their coauthor, and active promoter of environmental history studies in South America.

Credit: Ricardo Villalba, Argentine Institute of Snow, Glacier and Environmental Sciences, at the National Research Council for Science and Technology

Caption: Araucaria araucana trees in northern Patagonia, Argentina, some of which were used in the study. Some trees can live 1,000 years.

Caption: A continuing decade-long drought has hit much of Chile and western Argentina. Here, Natalia Edith Codoceo Flores amid the ruins of the Chilean village of Gualliguaica, which was flooded by a new reservoir in the 1990s; the water has now almost entirely receded.

Caption: At the same time western regions of the continent are suffering drought, parts of the east are seeing extreme rainfall. Here, flooded pasture outside Las Brujas, in southern Uruguay.

Proceedings of National Academy of Sciences