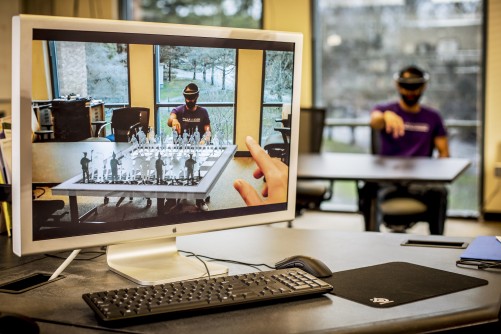 The UW Reality Lab will focus on developing next-generation virtual and augmented reality technologies and educating an industry workforce. In this holographic chess game developed by UW students, opponents move pieces that can only be seen through a virtual reality headset. 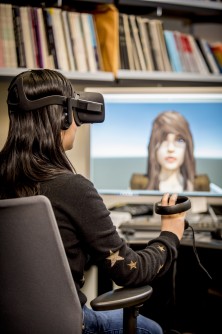 One goal of the UW Reality Lab — funded with initial investments from Facebook, Google and Huawei — is to achieve telepresence, allowing one to have a lifelike conversation with a person in a remote location.

Newswise — The University of Washington is launching a new augmented and virtual reality research center — funded by Facebook, Google, and Huawei — to accelerate innovation in the field and educate the next generation of researchers and practitioners.

The $6 million UW Reality Lab, funded with equal contributions from the three initial sponsors, creates one of the world’s first academic centers dedicated to virtual and augmented reality. The new center in the Paul G. Allen School of Computer Science & Engineering and located in Seattle — a national hub of VR activity — will support research and education initiatives with potential to deliver game-changing breakthroughs in the field.

“Allen School faculty have produced pioneering research in many of the areas that underpin AR and VR technologies, including computer vision, graphics, perception, and machine learning,” said Hank Levy, Allen School director and Wissner-Slivka Chair in Computer Science and Engineering. “Through our partnership with Facebook, Google, and Huawei, the Allen School and UW will be at the forefront of the next great wave of AR and VR innovation — pursuing breakthrough research and educating the next generation of innovators in this exciting and rapidly expanding field.”

To date, AR and VR applications are making their first steps, mostly focusing on entertainment and games. Yet everyone is interested to find the "killer app" for AR and VR. The goal of the UW Reality Lab is to develop technology to power the next generation of applications that will speak to a wider population. Those diverse ideas range from learning Spanish by seeing objects labeled in your field of view to achieving telepresence by conversing with a remote relative or co-worker as if you were in the same room.

Another key function of the UW Reality Lab will be to educate tomorrow’s AR and VR researchers and workers. The funding will support new courses and access to state-of-the-art labs and infrastructure for UW students to develop new technologies and applications. That includes accessing emerging technologies from the center’s sponsors and allowing those companies to test new ideas in a focused setting with computer science students. An advisory board of luminaries from across the AR and VR community will help the center remain at the forefront of this burgeoning field.

The UW Reality Lab builds on the Allen School’s established leadership in cutting-edge AR/VR education and research. In one example, the school in 2016 introduced the world’s first augmented reality capstone course, in which students built AR applications using 40 HoloLens units loaned from Microsoft before they were commercially available.

“Students had fantastic ideas and were able to create amazing AR and VR applications ranging from Holographic Chess to teaching one how to play the piano or cook. This opened our eyes to the potential of investing deeper in development of algorithms and applications for AR and VR,” said center co-lead and Allen School assistant professor Ira Kemelmacher-Shlizerman. “We realized there were so many cool things we could do if only we had more resources, more time and more devices. Given those, we can help bring the world’s AR and VR dreams to life.”

The UW Reality Lab’s location in Seattle — one of the world’s most active centers for VR and AR innovation — paves the way for unique industry and academic collaborations aimed at achieving new capabilities and offering users seamless experiences.

“Having an opportunity to be at the leading edge of this industry is really exciting,” said co-lead and Allen School professor Brian Curless. “It’s big, it’s happening now and there’s a lot of research to be done. We’re thrilled to take a leading role in making it all happen.”