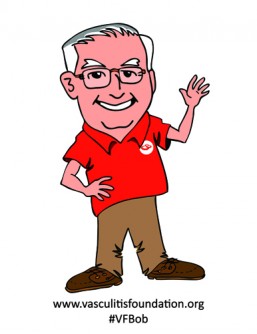 Newswise — In 1993 Bob Sah's father-in-law was diagnosed with vasculitis, a rare autoimmune disease that affects the blood vessels and can lead to debilitating pain, and sometimes death. Eight years later, Bob's wife, Elaine, was diagnosed with the same rare disease and Bob came to the conclusion that vasculitis wasn't just rare, it was rarely diagnosed, leaving patients with permanent health complications.

Sahs, who passed away last year turned his family’s struggles into a personal crusade to create awareness of vasculitis. For over 16 years, he volunteered with the Vasculitis Foundation, the world’s premier organization dedicated to educating physicians, funding research and supporting patients and family members whose lives have been affected by vasculitis.  Sahs went from grassroots volunteer to chairing the organization’s board of directors for two years.

To honor Sahs’ memory and celebrate his passion for raising   public awareness of vasculitis, the Vasculitis Foundation has established February 1, 2018 as “VF Bob Sahs Day.”

The public is invited to download a "VF Bob" poster from the VF website (www.vasculitisfoundation.org/vfbob), and take selfie photos with VFBob and then posting it on  Instagram or Facebook along with the hashtag “VFBob.”

VF Board Member Pamela Pekerman, whose father, Ilya Peckerman, was a vasculitis patient, conceived the ongoing campaign and noted that the web page  includes a hashtagged feed so that visitors to the page can see their photos as well as those of others.

“He loved to raise awareness of vasculitis and always carried a 6-foot VF banner on his vacations to China, Africa and other exotic destinations,” says Kullman. “Bob always said he would rather carry the banner than clothes in his suitcase.”

Karen Hirsch, president of the Vasculitis Foundation’s Board of Directors, also remembered Bob as a tireless advocate who enjoyed his role. “Bob was a caring advocate for all with vasculitis,” says Hirsch. “He brought his extraordinary wisdom and compassion to the board and led many efforts for many years to advance the mission of the VF. Bob was funny and kind, and he will be greatly missed.”

For information about vasculitis and the Vasculitis Foundation please visit www.vasculitisfoundation.org.