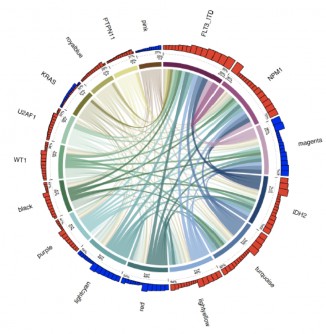 With a new dataset describing hundreds of samples from AML patients, researchers can learn what drugs may work best for specific subsets of patients. This image relates sensitivity to the cancer drug ibrutinib to co-occurrences of two types of genetic changes found in tumor samples.

Newswise — After years of work, researchers are releasing a massive dataset detailing the molecular makeup of tumor cells from more than 500 patients with an aggressive blood cancer called acute myeloid leukemia (AML). The dataset includes how hundreds of individual patients’ cells responded to a broad panel of drugs in laboratory screens.

It is the largest cancer dataset of its kind and could rapidly advance clinical trials evaluating potential AML treatments, says Brian Druker, a Howard Hughes Medical Institute investigator at Oregon Health & Science University (OHSU) who led the work with his colleague Jeffrey Tyner, also from OHSU.

Using a new online data viewer, researchers can now find out in minutes what kinds of targeted therapies are most effective against specific subsets of AML cells.“People can get online, search our database, and very quickly get answers to ‘Is this a good drug?’ or ‘Is there a patient population my drug can work in?’” Druker says. He and colleagues report the work October 17, 2018, in the journal Nature.

About 20,000 people are diagnosed with AML every year in the U.S. The cancer begins in the blood-forming cells of the bone marrow and is most commonly diagnosed in older adults. AML has the poorest prognosis of any blood cancer.

Over the last 40 years, advances in treatment for the disease have stalled; five-year survival rates for patients over 60 are still less than 10 percent. The FDA has approved a few targeted therapies for treating AML in specific subsets of patients, but even when patients respond to these treatments, relapses are common. “We know a lot about this leukemia, but there’s still a long way to go,” Druker says.

Developing effective therapies for AML has been challenging because the molecular factors that drive the disease vary significantly among patients. Researchers have identified at least 11 genetic classes of AML and uncovered thousands of different mutations among patients’ cancer cells. Targeted cancer therapies, which attempt to eliminate cancer cells by exploiting their specific molecular vulnerabilities, may only work when given to patients whose AML has the right molecular features. Until now, researchers haven’t had a clear map to identify the best candidates for specific treatments.

The new study reports initial findings from the BeatAML program, which is now moving into a clinical trial. Druker’s team, which includes collaborators at 11 academic medical centers and 11 pharmaceutical and biotechnology companies, collected and analyzed 672 samples of cancer cells from 562 patients. The team’s work, which was also supported by the Leukemia and Lymphoma Society, includes the complete DNA sequence of each sample’s protein-coding genes, as well as profiles of gene activity. The team also assessed how tumor cells from 409 of the samples responded to each of 122 different targeted therapies.

“The real power comes when you start to integrate all that data,” Druker says. “You can analyze what drug worked and why it worked.” That, he says, is the foundation for planning clinical trials to test new therapies in the patients who are most likely to respond.

In their own analysis, Druker and his colleagues have identified a set of three genetic mutations that may make AML patients good candidates for treatment with ibrutinib. That drug is currently approved for the treatment of some other types of blood cancer. AML cells carrying all three mutations are significantly more sensitive to ibrutinib than cells with just one or two of those mutations, the team found.

Clinical trials will be needed to evaluate ibrutinib’s effects in this group of patients – but tying the mutation trio to a potential drug sensitivity showcases how the new dataset can help researchers. “We’re just starting to scratch the surface of what we can do when we analyze the data,” Druker says.