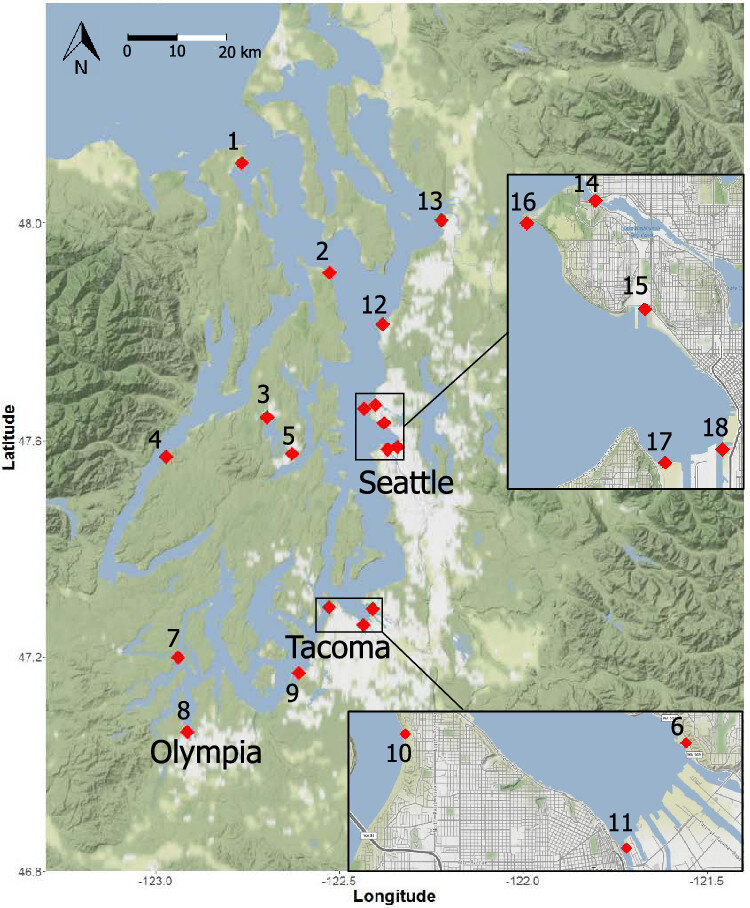 To look for potentially concerning chemicals in Puget Sound, researchers at the University of Washington and UW Tacoma collected water from 18 regions (marked by red diamonds) — from Port Townsend to Olympia — of Puget Sound's nearshore, meaning the team collected the water samples while standing on docks or the shore, not a boat. 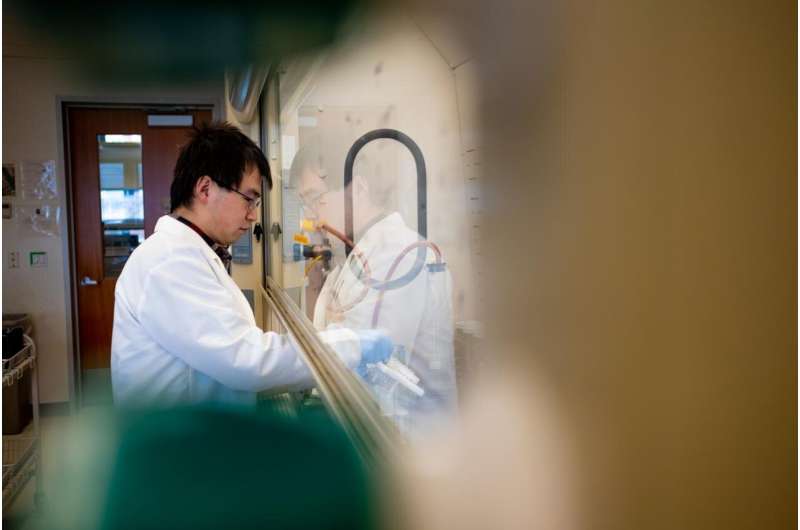 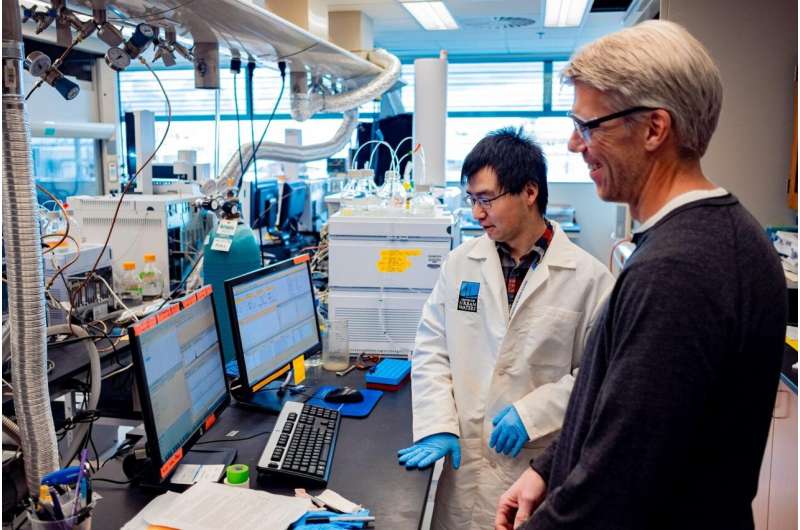 Newswise — The waters of Puget Sound support many species, including mussels, salmon and killer whales. But researchers know that runoff from land in the urbanized areas might contain chemicals that could harm these creatures, even if it's not always clear which chemicals are the most harmful.

Existing methods track specific chemicals of known concern. Until recently, however, there was no way to find out what other potentially harmful compounds might be present in the water.

Using a new "non-targeted" approach, researchers at the University of Washington and UW Tacoma screened samples from multiple regions of Puget Sound to look for other concerning chemicals. The team identified 64 chemicals never detected before in this waterway. Eight chemicals were at potentially hazardous concentrations that will need further investigation. The team published these results Dec. 30 in Environmental Science & Technology.

"Historically we've done a decent job of categorizing legacy chemicals in Puget Sound, but we also know there are a lot more chemicals that get into the water every day," said senior author C. Andrew James, a research scientist at the Center for Urban Waters at UW Tacoma. "If we can understand what's there and at what concentrations it's occurring, then we can start to figure out which chemicals will likely impact the health of fish, killer whales and other marine organisms."

The researchers collected water from 18 regions — from Port Townsend to Olympia — of Puget Sound's nearshore, meaning the team collected the water samples while standing on docks or the shore, not a boat.

"Our sampling sites covered areas of different land use. For instance, we have relatively clean sites such as the Hood Canal near Holly, Washington, as well as urbanized or industrial sites such as the cruise terminal at Smith Cove and the Thea Foss waterway at Commencement Bay," said lead author Zhenyu Tian, a research scientist at the Center for Urban Waters. "With such a wide range, we hoped to see a link between contamination and land use."

The researchers collected water at the 18 sites multiple times over 2018, leading to 78 water samples. Then they used a method called high-resolution mass spectrometry to help them identify what chemicals were in each sample.

"Our method allows us to detect hundreds to thousands of chemicals at once in a single sample. It determines a compound's mass really accurately," said co-author Edward Kolodziej, an associate professor in both the UW Department of Civil & Environmental Engineering and the UW Tacoma Division of Sciences & Mathematics.

The researchers use the mass of each compound to figure out the chemical formula, and then use other information to identify it.

"On CSI when they have these instruments, they turn on the instrument and it tells them: 'That's ibuprofen.' But in reality it's a lot of work to get to get to a point where you are absolutely sure you know what that chemical really is," Kolodziej said.

The team found at least 205 different chemicals across their samples. Of those compounds, researchers were able to reliably confirm the identity of 75, of which 64 were reported for the first time in Puget Sound.

"Our goal is to really figure out which chemicals matter from a biological perspective — how a fish or a shellfish will react," James said. "So we compared the levels of the chemicals we found to concentrations toxicologists have deemed concerning for marine life."

The eight chemicals found at concerning levels were:

These concerning chemicals were localized to specific "hot spots" in Puget Sound, and most of them weren't always present in different samples from the same site. This is in contrast to other chemicals that the team found in almost all of the samples but deemed less of a concern, such as the artificial sweetener Splenda and a drug used to treat seizures and bipolar disorder.

The next step, the researchers say, is to dive into what these data mean for marine life in the nearshore, specifically in shellfish and salmon. The team also hopes to continue to investigate the eight concerning chemicals and better understand the hot spots.

Additional co-authors are Katherine Peter, a postdoctoral research associate at the National Institute of Standards and Technology who completed this work as a research scientist at the Center for Urban Waters; Alex Gipe, a lab manager at the Center for Urban Waters; Haoqi Zhao, a doctoral student in the UW civil and environmental engineering department; Fan Hou, a doctoral student at China Agricultural University who completed this research as a visiting student at the UW; David Wark, an undergraduate student at UW Tacoma; and Tarang Khangaonkar, an environmental modeler at Pacific Northwest National Laboratory. This research was funded by the U.S. Environmental Protection Agency.

Grant number: 01J18101. This research has not been formally reviewed by EPA. The views expressed in this document are solely those of authors and do not necessarily reflect those of the Agency. EPA does not endorse any products or commercial services mentioned in this publication.

Caption: To look for potentially concerning chemicals in Puget Sound, researchers at the University of Washington and UW Tacoma collected water from 18 regions (marked by red diamonds) — from Port Townsend to Olympia — of Puget Sound's nearshore, meaning the team collected the water samples while standing on docks or the shore, not a boat.