Where the Rivers Meet the Sea 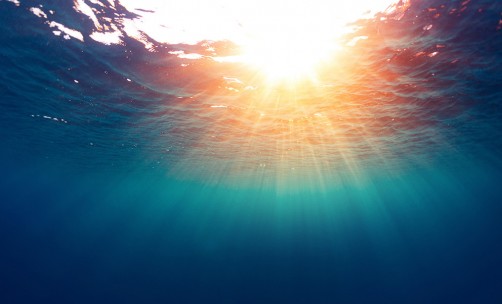 Penn State researchers have created a new hybrid technology that produces unprecedented amounts of electrical power where seawater and freshwater combine at the coast. 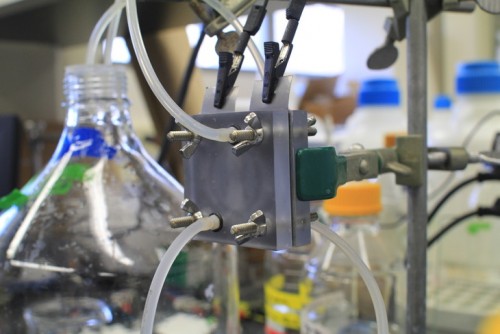 Photograph of the concentration flow cell. Two plates clamp the cell together, which contains two narrow channels fed with either synthetic freshwater or seawater through the plastic lines.

Newswise — Penn State researchers have created a new hybrid technology that produces unprecedented amounts of electrical power where seawater and freshwater combine at the coast.

“The goal of this technology is to generate electricity from where the rivers meet the ocean,” said Christopher Gorski, assistant professor in environmental engineering at Penn State. “It's based on the difference in the salt concentrations between the two water sources.”

That difference in salt concentration has the potential to generate enough energy to meet up to 40 percent of global electricity demands. Though methods currently exist to capture this energy, the two most successful methods, pressure retarded osmosis (PRO) and reverse electrodialysis (RED), have thus far fallen short.

PRO, the most common system, selectively allows water to transport through a semi-permeable membrane, while rejecting salt. The osmotic pressure created from this process is then converted into energy by turning turbines.

“PRO is so far the best technology in terms of how much energy you can get out,” Gorski said. “But the main problem with PRO is that the membranes that transport the water through foul, meaning that bacteria grows on them or particles get stuck on their surfaces, and they no longer transport water through them.”

This occurs because the holes in the membranes are incredibly small, so they become blocked easily. In addition, PRO doesn’t have the ability to withstand the necessary pressures of super-salty waters.

Here, the energy is created when chloride or sodium ions are kept from crossing ion-exchange membranes as a result of selective ion transport. Ion-exchange membranes don’t require water to flow through them, so they don’t foul as easily as the membranes used in PRO; however, the problem with RED is that it doesn’t have the ability to produce large amounts of power.

A third technology, capacitive mixing (CapMix), is a relatively new method also being explored. CapMix is an electrode-based technology that captures energy from the voltage that develops when two identical electrodes are sequentially exposed to two different kinds of water with varying salt concentrations, such as freshwater and seawater. Like RED, the problem with CapMix is that it’s not able to yield enough power to be viable.

Gorski, along with Bruce Logan, Evan Pugh Professor and the Stan and Flora Kappe Professor of Environmental Engineering, and Taeyoung Kim, post-doctoral scholar in environmental engineering, may have found a solution to these problems. The researchers have combined both the RED and CapMix technologies in an electrochemical flow cell.

“By combining the two methods, they end up giving you a lot more energy,” Gorski said.

The team constructed a custom-built flow cell in which two channels were separated by an anion-exchange membrane. A copper hexacyanoferrate electrode was then placed in each channel, and graphite foil was used as a current collector. The cell was then sealed using two end plates with bolts and nuts. Once built, one channel was fed with synthetic seawater, while the other channel was fed with synthetic freshwater. Periodically switching the water’s flow paths allowed the cell to recharge and further produce power. From there, they examined how the cutoff voltage used for switching flow paths, external resistance and salt concentrations influenced peak and average power production.

To determine the gained voltage of the flow cell depending on the type of membrane used and salinity difference, the team recorded open-circuit cell voltages while feeding two solutions at 15 milliliters per minute. Through this method, they identified that stacking multiple cells did influence electricity production. At 12.6 watts per square meter, this technology leads to peak power densities that are unprecedentedly high compared to previously reported RED (2.9 watts per square meter), and on par with the maximum calculated values for PRO (9.2 watts per square meter), but without the fouling problems.

“What we've shown is that we can bring that power density up to what people have reported for pressure retarded osmosis and to a value much higher than what has been reported if you use these two processes alone,” Gorski said.

Though the results are promising, the researchers want to do more research on the stability of the electrodes over time and want to know how other elements in seawater—like magnesium and sulfate—might affect the performance of the cell.

“Pursuing renewable energy sources is important,” Gorski said. “If we can do carbon neutral energy, we should.”

This research was supported by the National Science Foundation and internal seed grant funding from the Penn State Institutes of Energy and the Environment and the Materials Research Institute, and was recently published in Energy & Environmental Science. 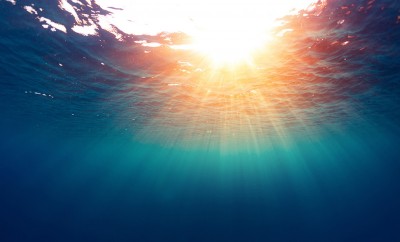 Caption: Penn State researchers have created a new hybrid technology that produces unprecedented amounts of electrical power where seawater and freshwater combine at the coast. 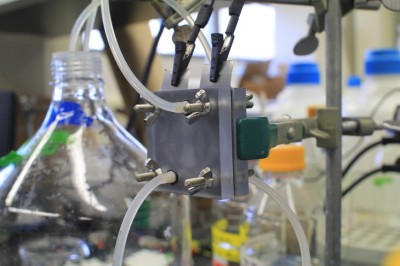 Caption: Photograph of the concentration flow cell. Two plates clamp the cell together, which contains two narrow channels fed with either synthetic freshwater or seawater through the plastic lines.