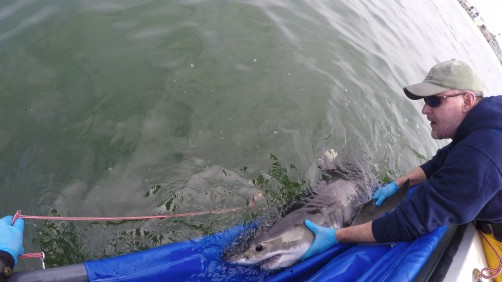 ​​​​​​​​​Newswise — Recent reports of as many as 25 great white sharks sighted off the California coast in one afternoon is enough to scare the bejesus out of most people.

But that's the wrong way to look at it, says Chris Lowe, Ph.D., professor of marine biology and director of the California State University, Long BeachShark Lab.

In fact, the increase in the number of juvenile sharks is a positive sign of a recovering shark population. ​

Over past 50 years, sharks – and specifically great whites – have been effectively ou​​sted from their natural environment by humans; water pollution has made their usual living spaces inhabitable.

However, the recent spike in juvenile great white shark sightings means that legislation like the Clean Water Act and the Marine Life Protection Act have proven effective in protecting and boosting marine life off the state's coast.

The media mean well in alerting the public about the recent sharp increase in sharks near California's coasts, but says Dr. Lowe, "they're not clarifying that these are babies and they are using our beaches as nurseries. These beaches are being used as cradles," he explains. "This is why these [juvenile sharks] are coming to our beaches — it is the safest for them."

"It has taken decades, but the reason we know these efforts are working is because these animals are coming back," he continues. "If the coastal ocean is getting healthier with five times more people living in Coastal California, this is because we have done a great job at regulating water quality."

The challenge then is clear.

"The public has to learn to live with these predators once again," says Lowe. "We have to now learn to share these environments."

Don't make the mistake of thinking, though, that young sharks aren't dangerous. "Those babies do have teeth and if you threaten them, like any other animal, they will defend themselves," Lowe warns. "But we have to keep things in perspective." ​

An International Center for Shark Research

Any number of animals can kill us, so why our almost unparalleled fascination with sharks?

"Historically, we are programmed to pay attention to what can harm us," Lowe explains, adding that this innate fear, along with exaggerations about what sharks are like – primarily coming from mainstream media and Hollywood — have led us to harbor aversions and even phobias toward the animals.

"This has all made it harder for us scientists," he says. "We are constantly learning more about sharks and their behaviors and it is not as scary as those old stories would lead you to believe."

Lowe, a CSULB alumnus, hopes the work being done in the Shark Lab will help quash those misconceptions. The lab is a part of the Southern California Acoustic Telemetry Tracking Network​, a collaboration of researchers studying marine life.

Telemetry allows the public to follow ocean animals in real time via transmitters to learn about their natural behavior. Technology like this will allow the Shark Lab to share data quickly and with a wider audience.

The lab has also partnered with select California lifeguard agencies, who have become the lab's front line educators for the public population.

The Shark Lab was founded in 1966 by CSULB marine biology professor Donald Nelson, Ph.D. and now serves as an international center for shark research, much of it led by students.

It was one of the first research hubs in the world to build transmitters to track and analyze sharks in their natural habitat; previously, researchers relied on scuba diving or catching the animals as a means to study them up close.

The lab also experiments with robotics and how to create and use technology that allows scientists to learn more about shark behavior in the wild.

For more information on the CSULB Shark Lab, Lowe and his students' research, or to donate to further fund the lab's efforts, visit the Shark Lab on CSULB's site.