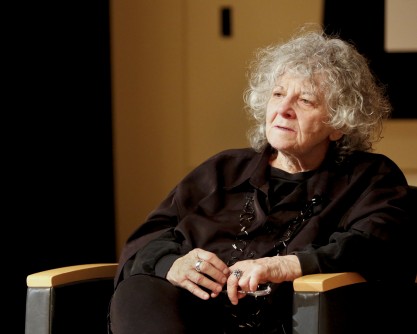 Newswise — The early 1980s conventional wisdom was that almost everything was known about ribosomes, the cellular structures responsible for making proteins according to the genetic instructions. The decade was also the turning point in antibiotics development. Despite substantial increase in bacterial antibiotic resistance, hardly any new antibiotics were designed.

Ada Yonath challenged the notion that ribosomal knowledge was complete, and she is now regarded as a pioneer in the field. Her work on visualizing ribosome structure using crystallographic techniques continues to contribute to ribosomal research, prompting researchers to look more closely at antibiotics that target bacterial ribosomes, including those of pathogenic bacteria species, an avenue that could help reverse current levels of antibiotic resistance.

The Nobel Laureate was the most recent Eugene P. Wigner Distinguished Lecturer, and while she described ribosome structure and function as well as her past work to the Jan. 15 audience at the Iran Thomas Auditorium, she steered the conversation to species-specific antibiotic resistance.

"Until now, all antibiotics were meant to kill bacteria and it didn't matter whether the bacteria was good or bad," said Yonath, the Martin S. and Helen Kimmel Professor of Structural Biology and director of the Helen and Milton A. Kimmelman Center for Biomolecular Structure and Assembly at the Weizmann Institute of Science in Israel.

"We're trying to design pathogen specific antibiotics," she said, a goal Yonath calls "a revolution in the field."

"Bacteria want to live. They find a way to exist by changing their own genome, and they can do it very quickly," she said.

But antibiotics that are species-specific and target each and every type of vicious bacteria, will help minimize the harm caused to the “good” bacteria in the human microbiome, and in turn, result in a more effective cure for illnesses caused by bacteria and a lower amount of antibiotic resistance.

In addition to her roles at the Weizmann Institute of Science, Yonath also serves on the scientific advisory board of the United Nations Secretary-General and the European Commission President's Science and Technology Advisory Council. In 2009, she shared the Nobel Prize in Chemistry for her structure and function studies in ribosomes and significant contributions to ribosome crystallography.

The Francis Eppes Professor of Chemistry at Florida State University and 1996 Nobel Laureate in Chemistry, Harold Kroto, is the next Eugene P. Wigner Distinguished Lecture Series speaker. His talk will be on March 26.

For more information on the Wigner lecture series, including past presentations and upcoming lecturers, see the Wigner Lecture Series website. -- Chris Samoray