Wake field left behind as we go up, down stairs causes respiratory droplets to travel much farther. 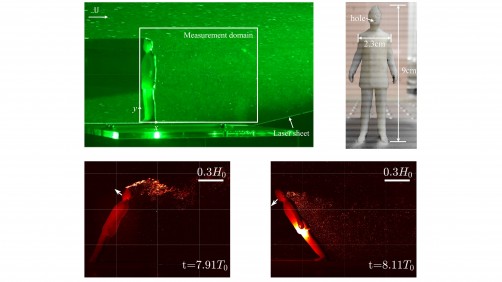 Experimental fluid mechanics show the different patterns of droplets dispersion from a person going up or downstairs corresponding to the wake flow.

Newswise — WASHINGTON, January 4, 2022 -- With many heading indoors for the winter months and respiratory droplets acting as a major contributor to COVID-19 spread, the scientific community has renewed interest in the dynamics behind how they spread. Modeling such behavior in a variety of scenarios for particles that range from less than 1 micrometer in size to 1,000 micrometers proves challenging.

Researchers describe the dispersion of cough-generated droplets that come from people as they walk up and down stairs. In AIP Advances, by AIP Publishing, Hongping Wang and his team show models driving how respiratory droplets fell from a mannequin inside a water tunnel, which was inclined at different angles to mimic a person going up and down stairs.

"Two different patterns of droplets dispersion are observed due to the different wake flows," said Wang. "These results suggest that we should cough with the head down toward the ground to ensure that most of the droplets enter the wake region."

The group 3D-printed mannequins using white resin, each with a different inclination angle to represent the leaning in that we naturally do when going up stairs and the leaning back when we walk down.

After placing each mannequin in the water tunnel, they introduced hollow glass microspheres into the tunnel. When illuminated by lasers, the glass microspheres provided a way to visualize the flow motion behind the mannequins. This flow field, often called a wake, was studied using a technique called particle image velocimetry.

In computer simulations, particles lower than the head and moving toward the ground became caught in each mannequin's wake and moved downward. It appeared particles above the head were able to move relatively far distances horizontally as if they were emitted from the top of the head.

For the mannequins whose inclines reflected going up stairs, particles concentrated below the shoulder and moved downward with a short travel distance. For simulating going down, particles dispersing over the person's head were carried for a long distance.

"The major challenge is how to use particles in water to simulate the droplets in the air," Wang said. "The most surprising part was that the particles higher than the head can travel a much longer distance than those particles lower than the head due to the induction of the wake flow."

Wang wants to study the 3D effects of what happens when real people cough while walking in experimental conditions.

AIP Advances is an open access journal publishing in all areas of physical sciences—applied, theoretical, and experimental. The inclusive scope of AIP Advances makes it an essential outlet for scientists across the physical sciences. See https://aip.scitation.org/journal/adv.