The perception of accents can change depending on the ethnicity of the speaker and whether the listener was raised in a multilingual, diverse environment 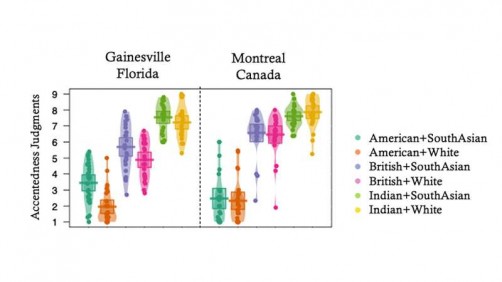 Newswise — MELVILLE, N.Y., December 9, 2020 -- Visual cues can change listeners’ perception of others’ accents, and people’s past exposure to varied speech can also impact their perception of accents.

Ethan Kutlu, from the University of Florida, will discuss his team’s work testing the impact that visual input and linguistic diversity has on listeners’ perceived accentedness judgments in two different locations: Gainesville, Florida, and Montreal, Canada.

The session “Diverse environments and their impact on accentednenss judgements,” will take place Dec. 9 at noon Eastern U.S. as part of the 179th Meeting of the Acoustical Society of America, which will be held virtually Dec. 7-10.

In their study, participants completed an accentedness judgement task, where they were shown either a white or a South Asian face while listening to sentences in American, British, or Indian English.

The researchers discovered that the participants in Gainesville perceived an increase in accentedness when the visual input changed from a white face to a South Asian face. They did not observe the same effect for listeners from Montreal.

The researchers chose Gainesville because it houses one of the largest and most popular public universities in Florida, so it provided access to many Hispanic and white students. Secondarily, unlike southern Florida, Gainesville has many bilingual speakers who often use only English in their everyday conversations.

This allowed the researchers to examine the extent to which being raised in a bilingual community but then switching to a monolingual context impacted speech perception.

Montreal was selected because it exemplified a contrastive situation, since many people were raised in a bilingual community and continued to maintain linguistic diversity in their environments. In Montreal, different races and ethnicities were more interconnected throughout.

“Our preliminary findings suggest that exposure to different accents and racial and ethnic categories on a regular basis could impact perceived accentedness judgements,” said Kutlu.