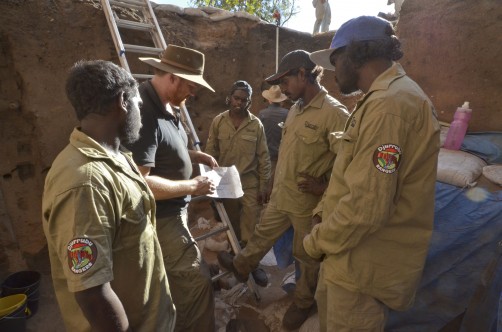 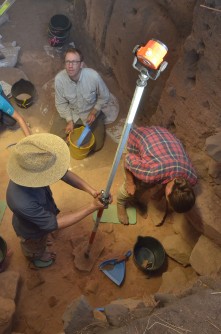 Ben Marwick, associate professor of anthropology at the University of Washington, and other team members excavate the lowest reaches of the dig site.

When and how the first humans made their way to Australia has been an evolving story.

While it is accepted that humans appeared in Africa some 200,000 years ago, scientists in recent years have placed the approximate date of human settlement in Australia further and further back in time, as part of ongoing questions about the timing, the routes and the means of migration out of Africa.

Now, a team of researchers, including a faculty member and seven students from the University of Washington, has found and dated artifacts in northern Australia that indicate humans arrived there about 65,000 years ago — more than 10,000 years earlier than previously thought. A paper published July 20 in the journal Nature describes dating techniques and artifact finds at Madjedbebe, a longtime site of archaeological research, that could inform other theories about the emergence of early humans and their coexistence with wildlife on the Australian continent.

The new date makes a difference, co-author and UW associate professor of anthropology Ben Marwick said. Against the backdrop of theories that place humans in Australia anywhere between 47,000 and 60,000 years ago, the concept of earlier settlement calls into question the argument that humans caused the extinction of unique megafauna such as giant kangaroos, wombats and tortoises more than 45,000 years ago.

"Previously it was thought that humans arrived and hunted them out or disturbed their habits, leading to extinction, but these dates confirm that people arrived so far before that they wouldn't be the central cause of the death of megafauna," Marwick said. "It shifts the idea of humans charging into the landscape and killing off the megafauna. It moves toward a vision of humans moving in and coexisting, which is quite a different view of human evolution."

Since 1973, digs at Madjedbebe, a rock shelter in Australia's Northern Territory, have unearthed more than 10,000 stone tools, ochres, plant remains and bones. Following the more recent excavations in 2012 and 2015, a University of Queensland-led research team, which included the UW, evaluated artifacts found in various layers of settlement using radiocarbon dating and optical stimulated luminescence (OSL).

The new research involved extensive cooperation with the local Aboriginal community, Marwick added. The Gundjeihmi Aboriginal Corporation, representing the Mirarr people, joined much of the excavation and reviewed the findings, Marwick said. Researchers had both a memorandum of understanding and a contract with the community, which gave control to the Mirarr as senior custodians, oversight of the excavation and curation of the finds. The Mirarr were interested in supporting new research into the age of the site and in knowing more about the early human occupants, particularly given environmental threats posed by nearby modern-day mining activities.

Noteworthy among the artifacts found were ochre "crayons" and other pigments, what are believed to be the world's oldest edge-ground hatchets, and evidence that these early humans ground seeds and processed plants. The pigments indicate the use of paint for symbolic and artistic expression, while the tools may have been used to cut bark or food from trees.

Labs in Australia used OSL to identify the age range, Marwick explained. Radiocarbon dating, which requires a certain level of carbon in a substance, can analyze organic materials up to about 45,000 or 50,000 years old. But OSL is used on minerals to date, say, the last time a sand grain was exposed to sunlight — helpful in determining when an artifact was buried — up to 100,000 years ago or more. That process measured thousands of sand grains individually so as to establish more precise ages.

The UW researchers worked in the geoarchaeology lab on the Seattle campus, testing sediment samples that Marwick helped excavate at Madjedbebe. One graduate student and six undergraduate students studied the properties of hundreds of dirt samples to try to picture the time in which the ancient Australian humans lived.

Using a scanning electron microscope, the students examined the composition of the sediment layers, the size of the grains of dirt and any microscopic plant matter. For another test, the students baked soil samples at various temperatures, then measured the mass of each sample, said UW doctoral student Gayoung Park, another author on the paper. Because organic matter turns into gases at high heat, a loss of mass indicated how much matter was in a given sample. This helped create a picture of the environments across the sedimentary layers of the site.

The team found that when these human ancestors arrived, northern Australia was wetter and colder.

"Together, we were working on establishing questions: What kind of environments did these people live in? What was the climate like? Were there any disturbances to the site, and were artifacts mixed up from different ages?" Marwick said. "I'm proud of being able to involve UW students in this research in a really substantial way."

One of the authors, Mara Page, was a senior double-majoring in archaeology and Earth and space sciences when she joined the project. She analyzed stable carbon isotopes found in sediment, which can reveal the types of plants present in the past and the kinds of environments they lived in. She determined that the vegetation at Madjedbebe remained stable during the time of human occupation, which suggests that there was no major environmental change that might have prompted humans to leave the area.

"I feel that I contributed something important by being able to rule something out of the story we were telling," Page explained.

By placing the date of Australian settlement at around 65,000 years ago, researchers confirm some of the shifting theories about when the first humans left Africa. A common view is that humans moved into Asia 80,000 years ago, and if they migrated to Australia some to 15,000 years later, it means those ancestors co-existed with another early human in Asia, Homo florensiensis. It also means that these early Australians preceded early Europeans, who are believed to have entered that continent 45,000 years ago. A related question is whether these early human species left Africa at one time, gradually spreading the population through Asia, Europe and Australia, or whether there were multiple waves of migration.

In recent years, new evidence, obtained through DNA testing of a 90-year-old hair sample of an Aboriginal Australian man, suggests Australia was settled as far back as 70,000 years ago.

Marwick believes the Madjedbebe results, because they rely on so many artifacts and intensive analysis of sediment samples, confirm that early humans occupied Australia at least 65,000 years ago and support the theory that Homo sapiens, the species of modern-day humans, evolved in Africa before dispersing to other continents. The findings also suggest Homo sapiens' predecessors, Neanderthals and Denisovans, overlapped with humans for a long period of time, and suggest a larger role for Australia, and the Eastern Hemisphere in general, in the story of humankind.

Marwick, who advocates for open science, particularly in data collection and the code used to analyze it, noted that the Nature paper is also pushing new frontiers because it combines three strands of reproducibility. Researchers examined a field site that has been excavated in the past; they've made available their raw data and code; and they consulted an outside lab for third-party OSL verification.

The research was funded primarily by the Australian Research Council, as well as the Australian Institute of Nuclear Science and the Australian Government's National Collaborative Research Infrastructure Strategy. Marwick and his students were also supported by the German Academic Exchange Service, the UW-UQ Trans-Pacific Fellowship program, and the UW Royalty Research Fellowship.