The idea that mass extinctions allow many new types of species to evolve is a central concept in evolution, but a new study using artificial intelligence to examine the fossil record finds this is rarely true, and there must be another explanation 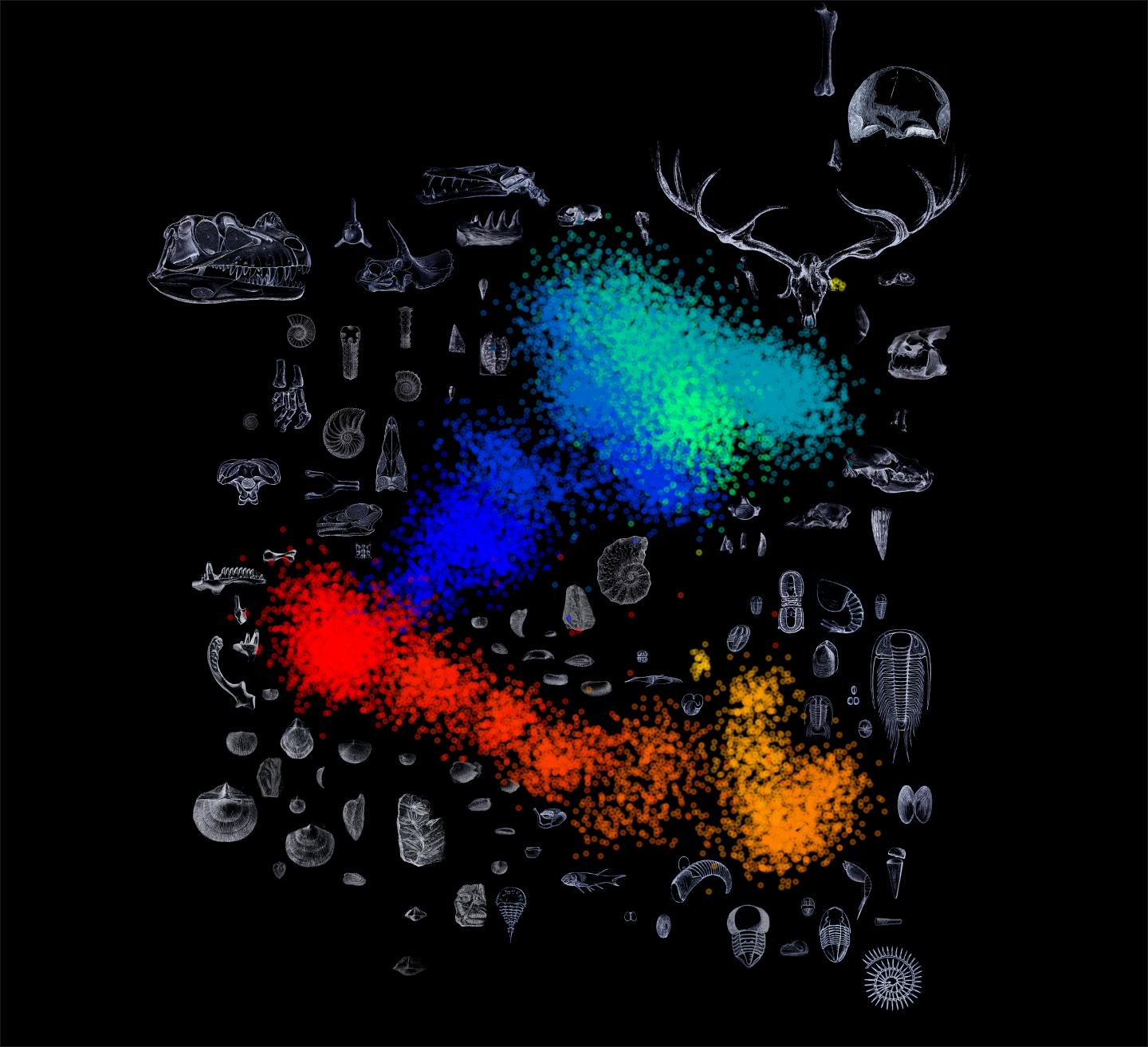 A new study applies machine learning to the fossil record to visualise life's history, showing the impacts of major evolutionary events. This shows the long-term evolutionary and ecological impacts of major events of extinction and speciation. Colours represent the geological periods from the Tonian, starting 1 billion years ago, in yellow, to the current Quaternary Period, shown in green. The red to blue colour transition marks the end-Permian mass extinction, one of the most disruptive events in the fossil record.

Newswise — Charles Darwin's landmark opus, On the Origin of the Species, ends with a beautiful summary of his theory of evolution, "There is a grandeur in this view of life, with its several powers, having been originally breathed into a few forms or into one; and that, whilst this planet has gone cycling on according to the fixed law of gravity, from so simple a beginning endless forms most beautiful and most wonderful have been, and are being, evolved." In fact, scientists now know that most species that have ever existed are extinct. This extinction of species has on the whole been roughly balanced by the origination of new ones over Earth's history, with a few major temporary imbalances scientists call mass extinction events. Scientists have long believed that mass extinctions create productive periods of species evolution, or "radiations," a model called "creative destruction." A new study led by scientists affiliated with the Earth-Life Science Institute (ELSI) at Tokyo Institute of Technology used machine learning to examine the co-occurrence of fossil species and found that radiations and extinctions are rarely connected, and thus mass extinctions likely rarely cause radiations of a comparable scale.

Creative destruction is central to classic concepts of evolution. It seems clear that there are periods in which suddenly many species suddenly disappear, and many new species suddenly appear. However, radiations of a comparable scale to the mass extinctions, which this study, therefore, calls the mass radiations, have received far less analysis than extinction events. This study compared the impacts of both extinction and radiation across the period for which fossils are available, the so-called Phanerozoic Eon. The Phanerozoic (from the Greek meaning "apparent life"), represents the most recent ~ 550-million-year period of Earth's total ~4.5 billion-year history, and is significant to palaeontologists: before this period most of the organisms that existed were microbes that didn't easily form fossils, so the prior evolutionary record is hard to observe. The new study suggests creative destruction isn't a good description of how species originated or went extinct during the Phanerozoic, and suggests that many of the most remarkable times of evolutionary radiation occurred when life entered new evolutionary and ecological arenas, such as during the Cambrian explosion of animal diversity and the Carboniferous expansion of forest biomes. Whether this is true for the previous ~ 3 billion years dominated by microbes is not known, as the scarcity of recorded information on such ancient diversity did not allow a similar analysis.

Palaeontologists have identified a handful of the most severe, mass extinction events in the Phanerozoic fossil record. These principally include the big five mass extinctions, such as the end-Permian mass extinction in which more than 70% of species are estimated to have gone extinct. Biologists have now suggested that we may now be entering a "Sixth Mass Extinction," which they think is mainly caused by human activity including hunting and land-use changes caused by the expansion of agriculture. A commonly noted example of the previous "Big Five" mass extinctions is the Cretaceous-Tertiary one (usually abbreviated as "K-T," using the German spelling of Cretaceous) which appears to have been caused when a meteor hit Earth ~65 million years ago, wiping out the non-avian dinosaurs. Observing the fossil record, scientists came to believe that mass extinction events create especially productive radiations. For example, in the K-T dinosaur-exterminating event, it has conventionally been supposed that a wasteland was created, which allowed organisms like mammals to recolonise and "radiate," allowing for the evolution of all manner of new mammal species, ultimately laying the foundation for the emergence of humans. In other words, if the K-T event of "creative destruction" had not occurred, perhaps we would not be here to discuss this question.

The new study started with a casual discussion in ELSI's "Agora," a large common room where ELSI scientists and visitors often eat lunch and strike up new conversations. Two of the paper's authors, evolutionary biologist Jennifer Hoyal Cuthill (now a research fellow at Essex University in the UK) and physicist/machine learning expert Nicholas Guttenberg (now a research scientist at Cross Labs working in collaboration with GoodAI in the Czech Republic), who were both post-doctoral scholars at ELSI when the work began, were kicking around the question of whether machine learning could be used to visualise and understand the fossil record. During a visit to ELSI, just before the COVID-19 pandemic began to restrict international travel, they worked feverishly to extend their analysis to examine the correlation between extinction and radiation events. These discussions allowed them to relate their new data to the breadth of existing ideas on mass extinctions and radiations. They quickly found that the evolutionary patterns identified with the help of machine learning differed in key ways from traditional interpretations.

The team used a novel application of machine learning to examine the temporal co-occurrence of species in the Phanerozoic fossil record, examining over a million entries in a massive curated, public database including almost two hundred thousand species.

Lead author Dr Hoyal Cuthill said, "Some of the most challenging aspects of understanding the history of life are the enormous timescales and numbers of species involved. New applications of machine learning can help by allowing us to visualise this information in a human-readable form. This means we can, so to speak, hold half a billion years of evolution in the palms of our hands, and gain new insights from what we see."

Using their objective methods, they found that the "big five" mass extinction events previously identified by palaeontologists were picked up by the machine learning methods as being among the top 5% of significant disruptions in which extinction outpaced radiation or vice versa, as were seven additional mass extinctions, two combined mass extinction-radiation events and fifteen mass radiations. Surprisingly, in contrast to previous narratives emphasising the importance of post-extinction radiations, this work found that the most comparable mass radiations and extinctions were only rarely coupled in time, refuting the idea of a causal relationship between them.

Co-author Dr Nicholas Guttenberg said, "the ecosystem is dynamic, you don't necessarily have to chip an existing piece off to allow something new to appear."

The team further found that radiations may in fact cause major changes to existing ecosystems, an idea the authors call "destructive creation." They found that, during the Phanerozoic Eon, on average, the species that made up an ecosystem at any one time are almost all gone by 19 million years later. But when mass extinctions or radiations occur, this rate of turnover is much higher.

This gives a new perspective on how the modern "Sixth Extinction" is occurring. The Quaternary period, which began 2.5 million years ago, had witnessed repeated climate upheavals, including dramatic alternations of glaciation, times when high latitude locations on Earth, were ice-covered. This means that the present "Sixth Extinction" is eroding biodiversity that was already disrupted, and the authors suggest it will take at least 8 million years for it to revert to the long term average of 19 million years. Dr Hoyal Cuthill comments that "each extinction that happens on our watch erases a species, which may have existed for millions of years up to now, making it harder for the normal process of 'new species origination' to replace what is being lost."

Tokyo Institute of Technology (Tokyo Tech) stands at the forefront of research and higher education as the leading university for science and technology in Japan. Tokyo Tech researchers excel in fields ranging from materials science to biology, computer science, and physics. Founded in 1881, Tokyo Tech hosts over 10,000 undergraduate and graduate students per year, who develop into scientific leaders and some of the most sought-after engineers in industry. Embodying the Japanese philosophy of "monotsukuri," meaning "technical ingenuity and innovation," the Tokyo Tech community strives to contribute to society through high-impact research.

The Earth-Life Science Institute (ELSI) is one of Japan's ambitious World Premiere International research centers, whose aim is to achieve progress in broadly inter-disciplinary scientific areas by inspiring the world's greatest minds to come to Japan and collaborate on the most challenging scientific problems. ELSI's primary aim is to address the origin and co-evolution of the Earth and life.

The World Premier International Research Center Initiative (WPI) was launched in 2007 by the Ministry of Education, Culture, Sports, Science and Technology (MEXT) to help build globally visible research centers in Japan. These institutes promote high research standards and outstanding research environments that attract frontline researchers from around the world. These centers are highly autonomous, allowing them to revolutionise conventional modes of research operation and administration in Japan.

Cross Labs is a research institute focused on machine intelligence, cognitive sciences, and artificial life, aimed at uncovering the mathematical principles of intelligence in natural and artificial systems. Cross Labs was founded in 2019 as a bridge between academia and the industry, by Cross Compass Ltd., a leading AI company providing state-of-the-art solutions to global industry leaders in manufacturing, robotics, gaming, healthcare, design, and marketing. Established in Tokyo in 2015, Cross Compass develops cutting-edge techniques in deep learning, machine learning, and artificial life, to increase safety, quality, and productivity for the benefit of society. For more information, please visit crosslabs.org and cross-compass.com.

GoodAI is a research and development organisation based in Prague with the goal to develop general artificial intelligence - as fast as possible - to help humanity and understand the universe. It was founded by CEO/CTO Marek Rosa in January 2014 and now has over 30 research scientists, engineers, and consultants working across its divisions.