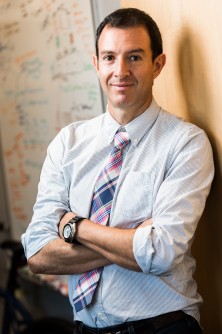 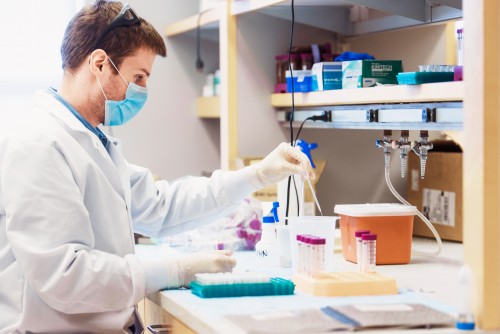 A researcher examines samples in the Digestive Health Research Institute at CWRU School of Medicine.

Newswise — In a study that has implications for humans with inflammatory diseases, researchers from Case Western Reserve University School of Medicine and colleagues have found that, given over a six-week period, the artificial sweetener sucralose, known by the brand name Splenda, worsens gut inflammation in mice with Crohn’s-like disease, but had no substantive effect on those without the condition. Crohn's disease is an inflammatory bowel disease of the digestive tract, which can lead to abdominal pain, severe diarrhea, bloody stools, weight loss, and fatigue. About 10-15 percent of human patients report that sweeteners worsen their disease.

The new findings, recently published in Inflammatory Bowel Diseases, revealed increases in the numbers of Proteobacteria, a large phylum [group] of microbes, in the intestines of mice drinking water supplemented with Splenda. Half of the mice studied, belonging to a genetic line that suffers a form of Crohn’s disease were more affected than the remaining half of mice, which belong to a healthy mouse line. Splenda produced intestinal overgrowth of E. coli (a member of the Proteobacteria group) and increased bacterial penetration into the gut wall, but only in Crohn’s disease-like mice.

The researchers also found that Splenda ingestion results in increased myeloperoxidase activity in the intestines of mice with the bowel disease, but not in the healthy mice. Myeloperoxidase is an enzyme in leukocytes (white blood cells) that is effective in killing various microorganisms. The inference is that the increased presence of E. coli intensified the myeloperoxidase activity in the bowel as the body sought to fight off the invader. The findings suggest that consumption of Splenda may increase myeloperoxidase production only in individuals with a pro-inflammatory predisposition, such as Crohn’s disease or other forms of inflammatory bowel disease patients. As part of this process, inflammation and its attendant consequences could exacerbate the symptoms of Crohn’s disease.

“Our findings suggest that patients with Crohn’s disease should think carefully about consuming Splenda or similar products containing sucralose and maltodextrin,” said the study’s lead author, Alex Rodriguez-Palacios, DVM, MSc, DVSc, PhD, assistant professor of medicine at Case Western Reserve School of Medicine. “Several studies have examined the ingredients found in this widely available product, separately. Here, we used Splenda as a means to test the combined effect of the commercial ingredients and used one of the best animal models of ileal Crohn’s disease.” This study demonstrates that the sweetener induces changes in gut bacteria and gut wall immune cell reactivity, which could result in inflammation or disease flare ups in susceptible people. On the other hand, the study suggests that individuals free of intestinal diseases may not need to be overly concerned.”

Splenda, which was introduced in 1998, includes a thought-to-be indigestible artificial sweetener called sucralose and a digestible sweetener called maltodextrin. It is about 600 times as sweet as sugar and has become one of the most popular artificial sweeteners on the market.  “This is perhaps the closest we can get to provide experimental evidence that these ingredients together induce biological changes known to cause inflammation which could be harmful over time to susceptible animal subjects,” said Rodriguez-Palacios. “Our next step would be to run experiments directly in patients, but that is more difficult to conduct given the large variability that is inherent to human genetics, microbiome and diet.”

Proteobacteria include a wide variety of pathogens, such as E. coli, Salmonella, and Legionellales (which causes Legionnaires' disease.)  A certain amount of these bacteria are normal in the body, and not harmful. Overgrowth, or excessive amounts, contributes to many health problems. Proteobacteria have previously been linked with various intestinal-tract diseases in several species, including humans. Most Proteobacteria have an outer membrane composed of lipopolysaccharides, which when present in the body, generally trigger powerful immune responses, including inflammation. Inflammation is the normal response of the body's immune system to injuries and invading organisms. During the process of combating the invader [“antigen”], symptoms such as pain, warmth, swelling, and redness can occur. If the invader, such as E. coli, is successfully repelled, the symptoms dissipate. But if the invader is not eradicated from the body, chronic inflammation may develop, or persist, as it is the case in inflammatory bowel diseases.

“Our findings were due solely to the administration of a minor component of the diet,” said the study’s senior author Fabio Cominelli, MD, PhD, professor of medicine, at Case Western Reserve School of Medicine and chief of gastroenterology at UH Cleveland Medical Center. “This suggests that other dietary habits or additives may lead to similar microbiota alterations. For instance, diet emulsifiers used as food additives have also been shown recently to alter the gut microbiota and promote colitis in mice. Other scenarios could put Crohn’s disease patients at risk of having exaggerated inflammation as well. This could include unexpected foodborne bacterial infections which would further recruit myeloperoxidase-containing leukocytes to the intestinal tract and the resultant inflammation.”

In addition to illustrating the experimental role of a sucralose-maltodextrin based artificial sweetener in promoting intestinal dysbiosis [a microbial imbalance] and myeloperoxidase activity, the studies indicate that it might be possible to measure Proteobacteria and myeloperoxidase as simultaneous fecal biomarkers in patients to monitor their gut (disease/health) adjustment to their diets.

Funding for this work was provided by the National Institutes of Health Grants DK091222 (Germ-Free and Gut Microbiome Core) to FC and ARP, DK055812 and DK042191 to FC and by a Career Development Award from the Crohn’s & Colitis Foundation to ARP. Further support was facilitated via the Mouse Models Core and the Histology/Imaging Core of the NIH P30 Silvio O. Conte Cleveland Digestive Disease Research Core Center (DK097948). 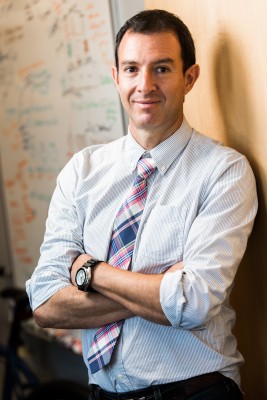 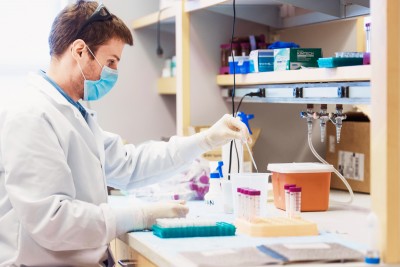 Caption: A researcher examines samples in the Digestive Health Research Institute at CWRU School of Medicine.