Bird Populations Near Fukushima Are More Diminished Than Expected 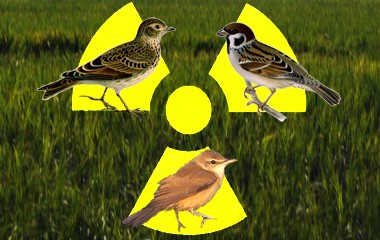 Adapted from work by Marek Szczepanek.

Newswise — Low-level radiation in Fukushima Prefecture appears to have had immediate effects on bird populations, and to a greater degree than was expected from a related analysis of Chernobyl, an international team of scientists reported today in Environmental Pollution.

In July 2011, the researchers identified and counted birds at 300 locations in Fukushima Prefecture, ranging from 15 to 30 miles from the damaged nuclear complex. Largely still open to human occupation, these areas had external radiation levels from 0.5 to 35 microsieverts per hour.

Overall, the bird community as a whole was significantly diminished in the more contaminated areas.

Moreover, the team compared the results to a similar study they undertook in the Chernobyl Exclusion Zone from 2006 through 2009. For 14 species of birds found in both locations, the diminution of population size from increased radiation dose was more pronounced at Fukushima than Chernobyl.

According to co-author Timothy Mousseau, a biologist in the University of South Carolina's College of Arts and Sciences, this suggests that "these birds, which have never experienced radiation of this intensity before, may be especially sensitive to radioactive contaminants."

However, when comparing all birds, including the species that are not common to both areas, the overall strength of the negative relationship was stronger in Chernobyl than in Fukushima. The authors believe that this may reflect the fact that many species in the most contaminated regions of Chernobyl have now almost completely disappeared.

The study, among the first published scientific reports concerning impacts on terrestrial animal populations in Fukushima, suggests that there are many similarities between the Chernobyl and Fukushima events and provides new insight into the first-generation effects of radiation exposure on animals in the wild. "Our results point to the need for more research to determine the underlying reasons for differences among species in sensitivity, both initially and following many generations of exposure," said Mousseau.

Although these early data are critical for setting a baseline, Mousseau added that it's imperative that "large-scale studies be initiated in Fukushima immediately to make the research potentially much more revealing."

The research was co-sponsored by QIAGEN GmbH, The Samuel Freeman Charitable Trust, the CNRS (France), and the University of South Carolina.