Chimps or Humans -- Who's the Better Baseball Pitcher? 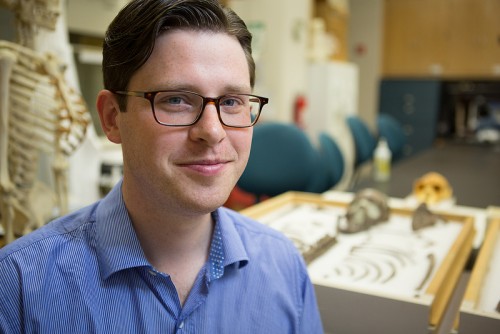 Neil Roach, a postdoctoral scientist in GW’s Center for the Advanced Study of Hominid Paleobiology in the Columbian College of Arts and Sciences at the George Washington University, is the lead researcher for a study published on the cover of the June 27 edition of the journal Nature. By examining evolutionary anatomy and conducting an experiment with baseball players, Dr. Roach and colleagues found that certain anatomical features allow humans to store and release energy in the shoulder—features that first appeared 2 million years ago when man began to hunt.

Newswise — WASHINGTON—Little leaguers and professional baseball players alike have our extinct ancestors to thank for their success on the mound, shows a study by George Washington University researcher Neil Roach, which is featured on the cover of the June 27 edition of the journal Nature.

Of course, the ability to throw fast and accurately did not evolve so our ancestors could play ball. Instead, Dr. Roach’s study proposes that this ability first evolved nearly 2 million years ago to aid in hunting. Humans are unique in their throwing ability, even when compared to our chimpanzee cousins.

“Chimpanzees are incredibly strong and athletic, yet adult male chimps can only throw about 20 miles per hour—one-third the speed of a 12-year-old little league pitcher,” said Dr. Roach, the study’s lead author and a postdoctoral scientist in GW’s Center for the Advanced Study of Hominid Paleobiology in the Columbian College of Arts and Sciences.

Funded by a grant from the National Science Foundation, Dr. Roach and colleagues from Harvard University set out to discover how humans throw so well, and when and why this ability evolved.

Using a 3-D camera system, like those used to make video games and animated movies, they recorded the throwing motions of collegiate baseball players, finding that the human shoulder acts much like a slingshot during a throw, storing and releasing large amounts of energy. “When humans throw, we first rotate our arms backwards away from the target. It is during this ‘arm-cocking’ phase that humans stretch the tendons and ligaments crossing their shoulder and store elastic energy,” Dr. Roach said. “When this energy is released, it accelerates the arm forward, generating the fastest motion the human body produces, resulting in a very fast throw.”

Dr. Roach and colleagues also found that certain anatomical features in the torso, shoulder and arm that evolved in our hominin ancestors made this energy storage possible. These features that allow humans to throw so well first appeared in the species Homo erectus approximately 2 million years ago.

“We think that throwing was probably most important early on in terms of hunting behavior, enabling our ancestors to effectively and safely kill big game,” Dr. Roach said. “Eating more calorie-rich meat and fat would have allowed our ancestors to grow larger brains and bodies and expand into new regions of the world—all of which helped make us who we are today.”

Dr. Roach’s study may also have important modern-day implications for some athletes. Baseball pitchers, for example, throw much more frequently than our ancestors probably did.

“At the end of the day, despite the fact that we evolved to throw, when we overuse this ability it can end up injuring us,” Dr. Roach said.

The next step for Dr. Roach and his colleagues is researching what humans were throwing so long ago, especially since stone projectile points don’t appear in the archaeological record until much more recently. The likely weapons of choice? Rocks and sharpened wooden spears.

Multimedia Resources Available for MediaA raw video package, including sound bites from Dr. Roach, 3-D skeletal reenactments of researchers’ throwing data and b-roll is available at https://vimeo.com/68215592. The password is NeilRoachGW. Its contents are under embargo until June 26 at 1 p.m. ET.

A website detailing the study is available at http://cashp.gwu.edu/ntroach/the-evolution-of-throwing/. The password is RoachNature627. Its contents are under embargo until June 26 at 1 p.m. ET.

More InformationTo read the full study or request an interview with Dr. Roach, contact Kurtis Hiatt at kkhiatt@gwu.edu or 202-735-6361.

The Center for the Advanced Study of Hominid PaleobiologyThe Center for the Advanced Study of Hominid Paleobiology is a research center at the George Washington University. CASHP’s mission is to undertake strategic research that addresses fundamental problems in human evolution that cross disciplinary boundaries, to act as a catalyst for interdisciplinary research programs involving scientists from other centers around the world and to promote interdisciplinary research through training and education.

The Columbian College of Arts and SciencesEstablished in 1821 in the heart of the nation’s capital, the George Washington University Columbian College of Arts and Sciences is the largest of GW’s academic units. It encompasses the School of Media and Public Affairs, the Trachtenberg School of Public Policy and Public Administration and more than 40 departments and programs for undergraduate, graduate and professional studies. The Columbian College provides the foundation for GW’s commitment to the liberal arts and a broad education for all students. An internationally recognized faculty and active partnerships with prestigious research institutions place Columbian College at the forefront in advancing policy, enhancing culture and transforming lives through research and discovery.

The George Washington UniversityIn the heart of the nation's capital with additional programs in Virginia, the George Washington University was created by an Act of Congress in 1821. Today, GW is the largest institution of higher education in the District of Columbia. The university offers comprehensive programs of undergraduate and graduate liberal arts study, as well as degree programs in medicine, public health, law, engineering, education, business and international affairs. Each year, GW enrolls a diverse population of undergraduate, graduate and professional students from all 50 states, the District of Columbia and more than 130 countries.