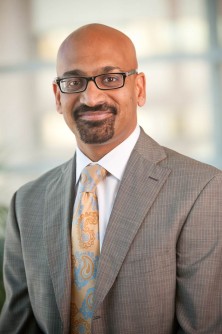 Because colorectal cancer (CRC) — the collective name for malignancies of the colon and rectum — has been increasing among young and middle-aged adults, the American Cancer Society updated its CRC screening guidelines, lowering the recommended age to begin screening from 50 to 45 years for people at average risk. (Persons at higher risk, such as those with a family history of CRC, should begin screening sooner, at 40 or even earlier.)

But two other organizations that issue similar guidelines — the United States Preventive Services Task Force and the U.S. Multi-Society Task Force — have not changed their recommendation to start screening first at age 50. A diverse team of national experts, led by Samir Gupta, MD, an associate professor of medicine at UC San Diego School of Medicine and gastroenterologist at UC San Diego Health, published a commentary in the journal Gastroenterology calling for caution in the widespread implementation of recommendations for early screening for the entire population.

The authors point to unintended repercussions, such as diverting limited resources to lower-risk, younger populations and away from higher-risk, older populations. It may also exacerbate existing CRC disparities because individuals of lower socioeconomic status are less likely to benefit from new health interventions than individuals with more knowledge and money.

Gupta says, for now, men and women of all racial and ethnic groups should be screened for colorectal cancer starting at age 50 continue until age 75. They recommend that efforts intensify in screening the highest risk populations, such as older individuals, those with a family history, or those who are over 50 and have never been screened.

“After that, it’s best to have a conversation with your physician to make individualized decisions on whether it is necessary,” said Gupta. “If you’re under 50 and you have family history or notice a change in bowel movements, blood in your stool and/or weakness or fatigue, talk to your physician. It may be nothing, but to use an old cliché, isn’t it better to be safe than sorry?”

On average, CRC is on the decline. An estimated 140,250 new cases will be diagnosed and 50,630 people will die from this disease this year. Although decreasing overall, according to the Colorectal Cancer Alliance, the disease is on the increase among those 50 and younger with 11 percent of colon cancer diagnoses and 18 percent of rectal cancer diagnoses occurring in persons under 50.

Samir Gupta, MD, a board-certified gastroenterologist with expertise in colorectal cancer screening and prevention, is available to discuss these recommendations.