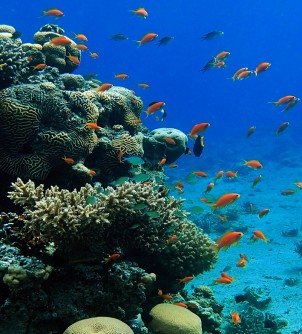 Newswise — New research on coral reefs, led by the University of Southampton, suggests that existing biodiversity will be essential for the successful adaptation of ecosystems to climate change.

About 25 per cent of all marine biodiversity depends on coral reefs. Climate change, in particular increasing seawater temperatures, threatens to disrupt the functionality of this productive association with potentially devastating knock-on effects to ecosystem services that are provided by coral reefs including food supply, coastal protection, attraction of tourists and access to biopharmaceuticals.

Investigations of the symbiotic partnership between the coral host and their algal symbiont in the world’s hottest coral reef environments – the Persian/Arabian Gulf (PAG) and nearby seas – lead an international consortium of scientists to conclude that natural selection of existing biodiversity is key to facilitating rapid adaptation of coral reef ecosystems to climate change.

The findings by the University of Southampton (UK), KAUST (Saudi Arabia), NYUAD (UAE) and Tel Aviv University /IUI (Israel) are published this week in the world-leading journal Proceedings of the National Academy of Sciences of the United States of America (PNAS).

Professor Jörg Wiedenmann, head of the University of Southampton’s Coral Reef Laboratory and principal investigator of the project, explains: “Corals of the PAG can survive exceptionally high salinity levels and temperatures of up to 35 degrees Celsius – conditions that would kill corals elsewhere. However, the historic climate change that created this extreme environment, left coral communities in the Middle Eastern region only less than 6,000 years to adjust to the drastic changes. Therefore, these coral ecosystems are ideal model systems to understand how reefs may respond to present-day climate change.”

Dr Benjamin Hume, Postdoctoral Research Fellow at the University of Southampton and lead author of the paper, says: “Using advanced molecular biological approaches, we recently discovered that corals of the Southern PAG host almost exclusively a species of symbiotic algae, Symbiodinium thermophilum, which was new to science. This finding suggested that this algal species was essential for the survival of the PAG corals and the question arose whether Symbiodinium thermophilum was the product of rapid evolution catalysed by the challenging conditions of the PAG, or whether this symbiont originated elsewhere.”

To answer this question, the scientific team analysed close to a thousand corals along 5,000 km of coastline in the PAG and adjacent seas.

Professor Christian Voolstra from the Red Sea Research Center at KAUST adds: “Next-generation sequencing technologies allowed us to analyse the DNA of the coral symbionts in unprecedented depth, a prerequisite to screen large numbers of samples for the genetic signature of Symbiodinium thermophilum.”

While the unusual symbiont was prevalent within the PAG, it was also found in the Gulf of Oman and Red Sea, however, only at barely detectable levels. Analysing a suite of molecular markers, the researchers discovered a surprising genetic diversity among S. thermophilum from outside the PAG.

Dr Hume explains: “Our data suggest that this diversity resulted from a genetic radiation aged at approximately 13 million years ago. This is far earlier than the formation of the PAG that only occurred about 15,000 years ago as a result of rising sea levels after the last ice age.”

He adds: “Out of this diverse group only one genetic type dominates the PAG, suggesting that selection by the extreme conditions has favoured an existing variant that was best suited to promote coral growth in this environment.”

Professor Wiedenmann continues: “Our example of the heat tolerant coral symbiont suggests that the genetic diversity that exists among populations can be key to survival if species are facing a rapid change in environmental conditions. These pre-adapted forms might exist only in low numbers among abundant, but more vulnerable individuals. Any loss of genetic material from coral reefs caused by habitat destruction, overfishing, nutrient enrichment and pollution could therefore reduce the capacity of species to adjust to a changing environment.”

He concludes: “To save coral reefs for the future, we need to fight the rising levels of greenhouse gases which cause climate change. At the same time, we need to protect present-day biodiversity to facilitate adaptation to changing environmental conditions. This applies not only to coral reefs but to ecosystems in general.”