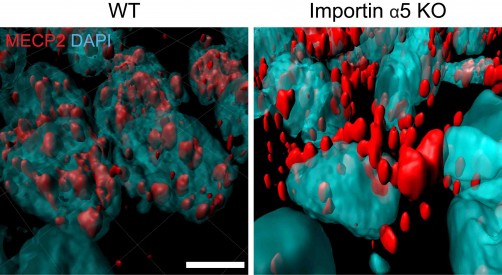 In genetically engineered mice lacking the protein importin alpha-5 (right), a molecule called MeCP2 (red), known to affect anxiety behaviors, stayed on the outside of the nuclei (blue) of brain neurons, instead of getting inside the nuclei as it does in regular mice (left). Images were obtained with a confocal microscope and displayed using computational reconstruction.

Newswise — According to some estimates, up to one in three people around the world may experience severe anxiety in their lifetime. In a study published in Cell Reports, researchers at the Weizmann Institute of Science have revealed a previously unknown mechanism underlying anxiety. Targeting this biochemical pathway may help develop new therapies to alleviate the symptoms of anxiety disorders.

For nearly two decades, the lab of Prof. Mike Fainzilber in the Institute’s Department of Biomolecular Sciences has studied the neuronal roles of proteins called importins. These proteins, found in all cells, shuttle molecules into the nucleus. The lab’s previous work focused on the peripheral nervous system, comprised of all nerve tissue in the body except the brain and spinal cord. Postdoctoral fellow Dr. Nicolas Panayotis, who joined the Fainzilber group in 2012, decided to find out whether any of the importins also play a role in the central nervous system – that is, the brain and spinal cord.

No alpha-5, no stress

Dr. Panayotis and colleagues studied five lines of mice that were genetically engineered by Prof. Michael Bader’s laboratory in the Max Delbrück Center for Molecular Medicine in Berlin to lack genes from the alpha subfamily of importins. The researchers subjected these mice to a battery of behavioral tests and found that one line of mice – those lacking importin alpha-5 – stood out in a unique manner: they showed no anxiety in stressful situations, such as when they were placed in large, exposed arenas or on a highly elevated, open platform.

The researchers then checked how these “calmer” mice differed from regular ones in terms of gene expression in certain brain regions involved in controlling anxiety. Computational analyses pointed to MeCP2, a regulatory gene known to affect anxiety behaviors. It turned out that importin alpha-5 was critical for enabling the entry of MeCP2 into the nuclei of neurons. Changes in the levels of MeCP2 in the nucleus, in turn, affected the levels of an enzyme involved in the production of a signaling molecule called S1P. In mice lacking importin alpha-5, MeCP2 failed to enter the nuclei of anxiety-controlling neurons, reducing S1P signaling and lowering anxiety.

After performing additional experiments to confirm that they had indeed discovered a new anxiety-regulating mechanism in the brain, the researchers searched for molecules that could modify this mechanism. They realized that drugs that modulate S1P signaling already exist; one such drug, fingolimod, is used to treat multiple sclerosis (MS). When the researchers tested the effects of fingolimod on regular mice, these mice showed reduced anxiety – similar to the genetically engineered mice lacking the importin alpha-5 gene. Moreover, the researchers found an earlier report from a clinical trial of fingolimod, according to which the drug had a calming effect on patients with MS. The new study might now help explain why this was the case.

“Our findings have opened up a new direction for research into the mechanisms of anxiety,” Dr. Panayotis says. “If we understand exactly how the circuitry that we’ve discovered controls anxiety, this may help develop new drugs, or direct the use of existing ones, to alleviate its symptoms.”

Says Prof. Fainzilber: “Current drugs for anxiety are limited in their efficacy or have undesirable side effects, which also limit their usefulness. Our findings may help overcome these limitations. In follow-up research, we have already identified a number of drug candidates that target the newly discovered pathway.”

The study’s findings also shed new light on rare genetic disorders characterized by mutations in the MeCP2 gene: Rett syndrome and MeCP2 duplication syndrome. Both these disorders are characterized by anxiety, among other symptoms. Identifying the precise mechanisms responsible for the entry of MeCP2 into neurons’ nuclei may, in the future, help develop therapies for these two disorders.

Prof. Michael Fainzilber’s research is supported by the Laraine and Alan A. Fischer Laboratory for Biological Mass Spectrometry; the Dr. Miriam and Sheldon G. Adelson Medical Research Foundation; the Zuckerman STEM Leadership Program; the Rising Tide Foundation; Mr. and Mrs. Lawrence Feis; the estate of Florence and Charles Cuevas; the estate of Lilly Fulop; and the European Research Council. Prof. Fainzilber is the incumbent of the Chaya Professorial Chair in Molecular Neuroscience.