Drug Found for Parasite That Is Major Cause of Death Worldwide 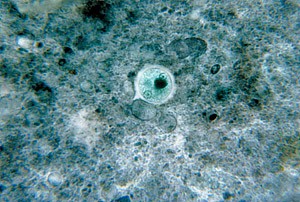 Newswise — Research by a collaborative group of scientists from UC San Diego School of Medicine, UC San Francisco and Wake Forest School of Medicine has led to identification of an existing drug that is effective against Entamoeba histolytica. This parasite causes amebic dysentery and liver abscesses and results in the death of more than 70,000 people worldwide each year.

Using a high-throughput screen for drugs developed by the research team, they discovered that auranofin – a drug approved by the US Food and Drug Administration 25 years ago for rheumatoid arthritis – is very effective in targeting an enzyme that protects amebae from oxygen attack (thus enhancing sensitivity of the amebae to reactive oxygen-mediated killing).

The results of the work, led by Sharon L. Reed, MD, professor in the UCSD Departments of Pathology and Medicine and James McKerrow, MD, PhD, professor of Pathology in the UCSF Sandler Center for Drug Discovery, will be published in the May 20, 2012 issue of Nature Medicine.

Entamoeba histolytica is a protozoan intestinal parasite that causes human amebiasis, the world’s fourth leading cause of death from protozoan parasites. It is listed by the National Institutes of Health as a category B priority biodefense pathogen. Current treatment relies on metronidazole, which has adverse effects, and potential resistance to the drug is an increasing concern.

“Because auranofin has already been approved by the FDA for use in humans, we can save years of expensive development,” said Reed. “In our studies in animal models, auranofin was ten times more potent against this parasite than metronidazole.”

“This new use of an old drug represents a promising therapy for a major health threat, and highlights how research funded by the National Institutes of Health can benefit people around the world,” said Reed. The drug has been granted “orphan-drug” status (which identifies a significant, newly developed or recognized treatment for a disease which affects fewer than 200,000 persons in the United States) and UC San Diego hopes to conduct clinical trials in the near future.

This work was supported by the Sandler Foundation and US National Institute of Allergy and Infectious Diseases grant 5U01AI077822-02, with additional support from R01 GM050389.