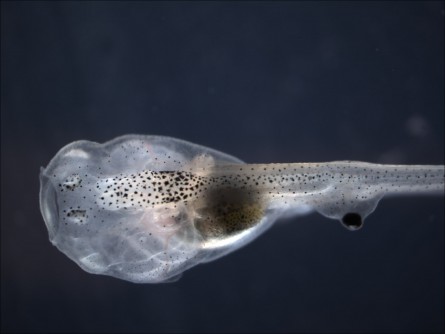 Researchers at Tufts University have shown that transplanted eyes located far outside the head in a vertebrate animal model can confer vision without a direct neural connection to the brain. In this image, a "blind" tadpole without its native (normal) eyes is able to see using a functioning ectopic eye located in tail. Dark area in midsection is the stomach.

Newswise — MEDFORD/SOMERVILLE, Mass. (February 27, 2013) – For the first time, scientists have shown that transplanted eyes located far outside the head in a vertebrate animal model can confer vision without a direct neural connection to the brain.

Biologists at Tufts University School of Arts and Sciences used a frog model to shed new light – literally – on one of the major questions in regenerative medicine, bioengineering, and sensory augmentation research.

"One of the big challenges is to understand how the brain and body adapt to large changes in organization," says Douglas J. Blackiston, Ph.D., first author of the paper "Ectopic Eyes Outside the Head in Xenopus Tadpoles Provide Sensory Data For Light-Mediated Learning," in the February 27 issue of the Journal of Experimental Biology. "Here, our research reveals the brain's remarkable ability, or plasticity, to process visual data coming from misplaced eyes, even when they are located far from the head.”

Blackiston is a post-doctoral associate in the laboratory of co-author Michael Levin, Ph.D., professor of biology and director of the Center for Regenerative and Developmental Biology at Tufts University.

Levin notes, "A primary goal in medicine is to one day be able to restore the function of damaged or missing sensory structures through the use of biological or artificial replacement components. There are many implications of this study, but the primary one from a medical standpoint is that we may not need to make specific connections to the brain when treating sensory disorders such as blindness."

In this experiment, the team surgically removed donor embryo eye primordia, marked with fluorescent proteins, and grafted them into the posterior region of recipient embryos. This induced the growth of ectopic eyes. The recipients’ natural eyes were removed, leaving only the ectopic eyes.

Fluorescence microscopy revealed various innervation patterns but none of the animals developed nerves that connected the ectopic eyes to the brain or cranial region.

To determine if the ectopic eyes conveyed visual information, the team developed a computer-controlled visual training system in which quadrants of water were illuminated by either red or blue LED lights. The system could administer a mild electric shock to tadpoles swimming in a particular quadrant. A motion tracking system outfitted with a camera and a computer program allowed the scientists to monitor and record the tadpoles' motion and speed.

Eyes See Without Wiring to Brain

The team made exciting discoveries: Just over 19 percent of the animals with optic nerves that connected to the spine demonstrated learned responses to the lights. They swam away from the red light while the blue light stimulated natural movement.

Their response to the lights elicited during the experiments was no different from that of a control group of tadpoles with natural eyes intact. Furthermore, this response was not demonstrated by eyeless tadpoles or tadpoles that did not receive any electrical shock.

"This has never been shown before," says Levin. "No one would have guessed that eyes on the flank of a tadpole could see, especially when wired only to the spinal cord and not the brain."The findings suggest a remarkable plasticity in the brain’s ability to incorporate signals from various body regions into behavioral programs that had evolved with a specific and different body plan.

"Ectopic eyes performed visual function," says Blackiston. "The brain recognized visual data from eyes that impinged on the spinal cord. We still need to determine if this plasticity in vertebrate brains extends to different ectopic organs or organs appropriate in different species."

One of the most fascinating areas for future investigation, according to Blackiston and Levin, is the question of exactly how the brain recognizes that the electrical signals coming from tissue near the gut is to be interpreted as visual data.

In computer engineering, notes Levin, who majored in computer science and biology as a Tufts undergraduate, this problem is usually solved by a "header"—a piece of metadata attached to a packet of information that indicates its source and type. Whether electric signals from eyes impinging on the spinal cord carry such an identifier of their origin remains a hypothesis to be tested.

###Tufts University, located on three Massachusetts campuses in Boston, Medford/Somerville, and Grafton, and in Talloires, France, is recognized among the premier research universities in the United States. Tufts enjoys a global reputation for academic excellence and for the preparation of students as leaders in a wide range of professions. A growing number of innovative teaching and research initiatives span all Tufts campuses, and collaboration among the faculty and students in the undergraduate, graduate, and professional programs across the university's schools is widely encouraged