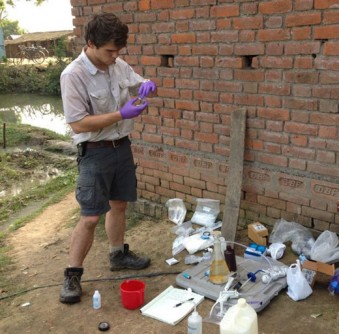 Michael Vega, 2016 Kansas State University bachelor's graduate in geology and chemistry, prepares samples for microbial and organic analyses in West Bengal, India, to measure the level of manganese in water to determine if it is arsenic's sidekick. 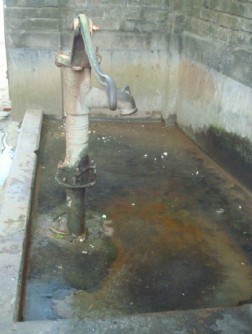 Newswise — MANHATTAN, KANSAS — In the world of heavy metal poisoning, arsenic may have found a sidekick — and it's one that needs more research to understand its influence on human health, according to Kansas State University researchers.

Manganese, a trace mineral necessary in small amounts for human health but potentially toxic in high doses, relates differently than its cancer-causing cousin, arsenic, to dissolved organic matter in groundwater, according to a study published in Frontiers in Environmental Science. Despite the difference, the Kansas State University researchers who spearheaded the study say they think that the two metals might have a connection that could be hazardous to human health.

Saugata Datta, professor of geology, and Michael Vega, 2016 bachelor's graduate in geology and chemistry, Overland Park, found high levels of both metals in drinking water in India. Datta and Vega also found that the character of dissolved organic matter — organic compounds in water that are associated with sediments and depend on the sources such as plants or microbes — was strongly correlated with arsenic in groundwater, but not as much with manganese.

"We sampled 51 wells in the Bengal Basin and more than 90 percent of them were contaminated with arsenic, manganese or both," Vega said. "We saw this distinct relationship with arsenic and dissolved organic matter, and we think that processes between manganese and dissolved organic matter may contribute to the distribution of arsenic in groundwater."

According to Datta, there have been numerous studies on arsenic's effects on human health and how to remediate it, but there is a lack of knowledge about the relationship of arsenic with excess levels of manganese. Just as arsenic at levels above 10 micrograms per liter in drinking water is considered a public health concern, so should manganese at levels above 0.4 milligrams per liter in drinking water because so little is known, he said.

"We need further studies to ascertain reports that increased infant mortality rates might be linked to high levels of manganese in drinking water," Datta said. "The joint effect of manganese and arsenic is definitely causing a level of harm that should be under deep scrutiny for the near future not just in India, but in other parts of the world where drinking water quality is an issue."

Manganese can be in drinking water and air particulates and absorbed by crops, leading to overexposure, Datta said. For this reason, he said, manganese needs to be better monitored and studied.

"In 2011, the World Health Organization removed the maximum contaminant limit for manganese, which was 0.4 milligrams per liter, from the 'WHO Guidelines for Drinking Water Quality,'" Datta said. "But manganese is often found alongside arsenic in drinking water and scientists haven't looked into that in as much detail."

Datta and Vega collected water samples from wells on both sides of the Ganges River in West Bengal, India. They found high concentrations of arsenic, manganese and iron on the east side of the river. On the west side of the river, there were lower levels of arsenic and iron but manganese remained high, which Vega attributes to a difference in soil chemistry and dissolved organic matter.

According to Datta, who was recently elected as chair of the Division of Geology and Health of the Geological Society of America, manganese contamination can occur naturally with the weathering of rocks all over the world, including in Kansas. Though water quantity is a concern in many areas of Kansas, Datta said testing for a presence of manganese in the Ogallala Aquifer and well water in rural Kansas is important to determine good water quality.