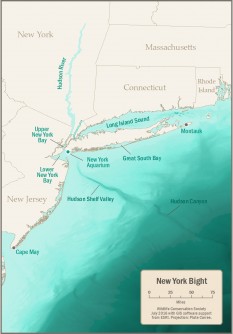 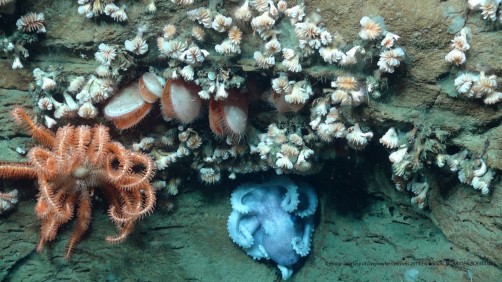 Octopus and Desmophyllum on wall in Norfolk Canyon. These are the same species found in Hudson Canyon.

In late 2016, WCS’s New York Aquarium submitted a nomination to NOAA to designate the Hudson Canyon as a National Marine Sanctuary. The nomination for sanctuary status is supported by a coalition of stakeholders including local businesses, NGO’s, elected officials, and members of the public.

NOAA’s decision to move the nomination of Hudson Canyon into the inventory is a critical milestone and an important first step towards sanctuary designation. WCS and our partners are now encouraging NOAA to initiate the multi-year designation process which is transparent, inclusive, and stakeholder-driven.

“We commend NOAA for adding the Hudson Canyon to a list of natural wonders now being considered for sanctuary status,” said John Calvelli, WCS’s Executive Vice President for Public Affairs. “This mysterious ecological treasure is home to a remarkable diversity of marine life that includes deep sea corals, sharks, sea turtles, and whales. Designating Hudson Canyon as a National Marine Sanctuary provides an opportunity to permanently prohibit oil, gas, and mineral exploration and extraction from this sensitive habitat. This will not only protect wildlife but also benefit commercial and recreational fisheries that depend on this productive ecosystem.”

“As someone who has made environmental renewal and preservation in urban areas a priority as a member of Congress during the past two decades, I am thrilled that the Hudson Canyon has been placed into the inventory of sites being considered for designation as a National Marine Sanctuary,” said Congressman José E. Serrano, a key supporter of the nomination. “This is an important step forward in preserving this natural wonder. Although not widely known, the Hudson Canyon is larger than the Grand Canyon and houses diverse marine wildlife crucial to the quality of New York’s environment and local economy. Its designation as a National Marine Sanctuary will help ensure its resources are utilized in a sustainable manner and protect its biodiversity so that our local population and visitors can enjoy the beauty and bounty of this marine treasure for generations to come.” Formed more than 10,000 years ago during the last Ice Age, the Hudson Canyon is a marine biodiversity hotspot that also supports the region’s ocean-based economies. Fish and invertebrate species also provide sustenance for a wide array of marine mammal and seabird populations, both of which support ecotourism businesses. “Adding the Hudson Canyon to the inventory of potential sanctuaries is a step in the right direction for both the region’s marine life and residents of New York and New Jersey,” said Jon Forrest Dohlin, WCS Vice President and Director of the New York Aquarium. “We thank NOAA for taking the necessary steps to help safeguard the Hudson Canyon for future generations.”

To sign the petition asking NOAA to initiate the designation of Hudson Canyon as a National Marine Sanctuary, click here: http://bit.ly/2mDUkLJ

WCS’s New York Aquarium works to protect local waters through its NY Seascape Program, an initiative that facilitates the study and restoration of healthy populations of local marine species in New York and New Jersey marine waters. The marine habitats of the Hudson Canyon will be featured in the aquarium’s Canyon’s Edge exhibit in the future Ocean Wonders: Sharks! building.

Wildlife Conservation Society's New York Aquarium is open every day of the year. Summer hours are 10 a.m. to 6 p.m. daily. Fall/winter/spring hours are 10 a.m. to 4:30 p.m., daily. Tickets are $11.95 per person (ages 3 & up), and include Aquarium admission plus one admission to the new 4-D Theater; children age 2 and under are admitted free. Fridays after 4 p.m. in the summer and after 3 p.m. in the fall, Aquarium admission is by pay-what-you-wish donation. The aquarium is located on Surf Avenue at West 8th Street in Coney Island. The New York Aquarium is located on property owned by the City of New York, and its operation is made possible in part by public funds provided through the New York City Department of Cultural Affairs. For directions, information on public events and programs, and other aquarium information, call 718-265-FISH or visit our web site at http://www.nyaquarium.com. Now is the perfect time to visit and show support for the WCS New York Aquarium, a beloved part of Brooklyn and all of the City of New York. Due to Hurricane Sandy we are partially opened. Check our website for more information. www.nyaquarium.com.