Newswise — Seen from the air, the peninsula that is home to the mid-Norway town of Ørland and the nation’s Main Air Station, looks like the head of a seahorse with its nose pointed south.

It didn’t always look this way, though.

A couple of thousands of years ago, Ørland’s peninsula looked more like the crook of a finger, with a bay sheltered on its southern side. At that time, Norway’s land area was still recovering from the last Ice Age, and the weight of the ice was so great that it actually depressed the ground, creating a bay. The land has since risen up, or rebounded, to form the dry land we know today.

That 1500-year-old sheltered bay and the fertile fields surrounding it turned out to be the perfect home for a settlement of Iron Age Norwegians – Norwegians who actively traded and liked their bling, if archaeological finds from the recent dig are any indication.

“This was a very strategic place,” says Ingrid Ystgaard, project manager at the Department of Archaeology and Cultural History at the Norwegian University of Science and Technology's (NTNU) University Museum. “It was a sheltered area along the Norwegian coastal route from southern Norway to the northern coasts. And it was at the mouth of Trondheim Fjord, which was a vital link to Sweden and the inner regions of mid-Norway.”

New facilities and expanded runwaysØrland has long been known to archaeologists as a potential treasure trove of finds, because of its strategic location.

But because archaeologists can’t just go around digging up areas where they think there might be interesting remains, they have to wait for the opportunity to arise – as when Norway made the decision to purchase 52 new F-35 fighter jets.

The jets will need new facilities at Ørland, and the Air Force will also expand existing runways to accommodate the jets. Norwegian law requires a preliminary archaeological study of any construction site, and additional follow-up if anything of significance is turned up.

Size of the site adds significanceThe size of the expansion puts the total area that archaeologists first need to study at roughly 91,000 m2, or nearly three times the area of a good-sized shopping centre.

This, Ystgaard says, is a bonanza, because the size of the area allows archaeologists to see how different longhouses, garbage pits and other finds relate to each other.

“We’re really able to put things in context because the area is so big,” she said. The size of the dig also means there are lots of archaeologists at work, and for a long time.

More than 20 field staff will work a total of 40 weeks out on the site, until the end of the 2016 field season. The budget for the project is NOK 41 million, or about EUR 4.2 million, excluding the cost of the big excavating machines, and room and board for workers.

Bones and blingIt’s probably safe to say that few things excite archaeologists more than garbage dumps – or middens, as they are called in the trade. Even today, our trash says a lot about how we live – what we eat, what we wear, what we do for fun or work.

But it takes some really tough trash to survive 1500 years. Mostly, what archaeologists find are beads, glass and metal objects and ceramics, if they are lucky.

“Most of the time we don’t even find middens at all on sites that are older than the Mediaeval period,” Ystgaard said.

In this case, however, the team has also found lots of old animal and fish bones – mainly because the soil in the area is made from ground-up seashells, which isn’t very acidic. Normally, soil in Norway tends to be more acidic, and eats away at bones.

“Nothing like this has been examined anywhere in Norway before,” Ystgaard said.

There are enough bones to figure out what kinds of animals they came from, and how the actual animal varieties relate to today’s wild and domesticated animals, she said. The archaeologists have also found fish remains, from both salmon and cod, and the bones from seabirds, too.

The middens have also provided others surprises. One was a delicate blue glass bead and several amber beads, suggesting the former residents liked their bling. Another was the remains of a green drinking glass that was characteristic of imports from the Rhine Valley in Germany.

This last is also a testament to how well off the former residents of this area were, Ystgaard said. “It says something that people had enough wealth to trade for glass.”

Holes in the ground tell a storyTo the average person, the discoloured soil in a distinct polka-dot pattern that makes up most of what the archaeologists have found looks like – well, dirty dirt.

But for an archaeologist, the patterns and their context help tell a story and give significance to any items that they find.

The whole process of digging up a huge field is an impressive juxtaposition of big excavators, brought in to carefully peel off the top layers of soil, and archaeologists working with hoes, trowels, sieves and even paintbrushes and toothbrushes.

In the case of the Ørland site, the excavators are brought in to remove the layer of soil that has been recently farmed. Norwegians have farmed this land for a long time – in fact the name of the farm, Vik, the Norwegian word for bay, reflects its early origins as a farm on the bay that was here 1500 years ago. Now, the shoreline is 1.7 km away.

“The excavator operators are incredibly skilled,” Ystgaard said. “You can ask them to remove 2 centimetres of soil and they can do it.”

Farmstead in the shape of a UAs the excavators whittle away the soil, centimetre-by-centimetre, the archaeologists are on the lookout for the discoloured soil that means there was an accumulation of organic material.

In this case, the size and the type of discoloured soil may indicate a fire pit or a place where posts for longhouses were placed. Really big discoloured areas near the longhouses are generally middens.

So far, these marks in the soil show that there were at least three buildings arranged in the shape of a U. The two longhouses that were parallel to each other measured 40 metres and 30 metres and were connected by a smaller building.

The 40-metre longhouse contained several fire pits, at least one of which was clearly used for cooking. Other fire pits may have provided light for handwork, or for keeping the longhouse warm.

Not far from here – but outside of the bounds of the site – Ystgaard expects there are graves, too, and a harbour with boat houses.

“There was a lot of activity here,” Ystgaard said of the site. “Now our job is to find out what happened here, how people lived. We discover new things every day we are out in the field. It’s amazing.” 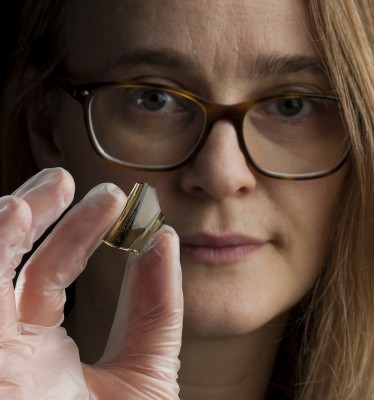 Caption: Ingrid Ystgaard, an archaeologist at the NTNU University Museum and project manager for the archaeological survey at the Ørland Main Air Station, holds a shard of a glass beaker imported from the Rhine area in today’s Germany. These glass beakers were of great value and show that the farm was relatively well off, with access to products from the continent.

Caption: These marks in the soil are part of a larger find that show there were three buildings here arranged in the shape of a U. The size of the buildings and associated finds show that the owners of the farmstead were relatively wealthy. 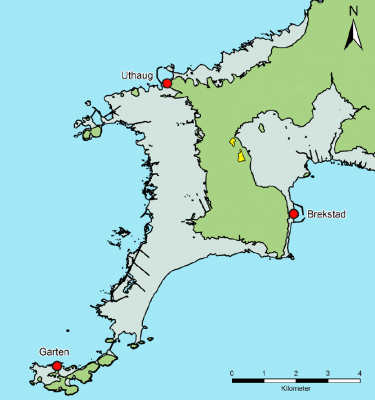 Caption: The peninsula at the mouth of Trondheim fjord that shows the location of the dig (in yellow) and the area that was dry land 1500 years ago (in green). The dig is clearly located on the edge of what was once a protected bay. Source: Ingrid Ystgaard 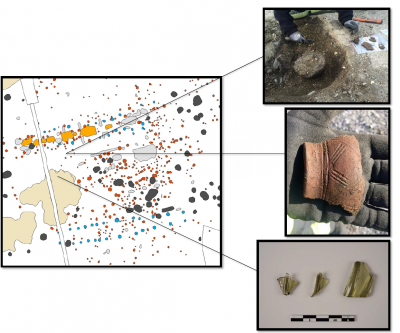 Caption: Pot shards, bits of glass and the remains of a cooking area are among the finds uncovered in a Norwegian Iron-Age archaeological site on the central Norwegian coast, at the mouth of Trondheim fjord. 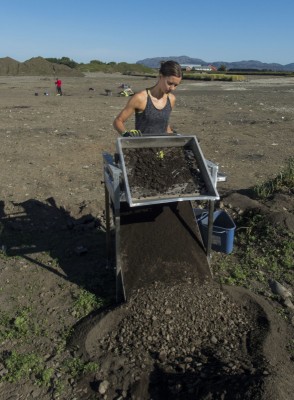 Caption: Synne H. Rostad operates a standing sieve to sift out smaller bones and objects from the dirt.