Is It Possible to Remove Plastics From Earth's Oceans? 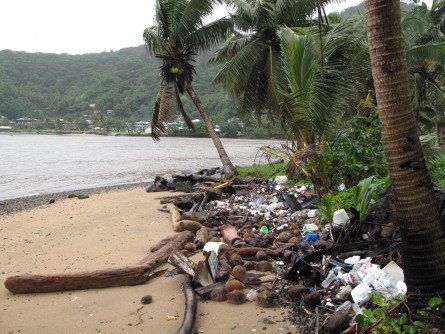 Newswise — If aliens flew by our planet and looked down at the Great Pacific Garbage Patch, you wouldn’t blame them for moving along.

Look at the numbers. It’s somewhere between twice the size of Texas and three times the size of France. It contains 80,000 tons of debris. Scientists estimate that’s 1.8 trillion pieces of glow sticks, nets, bleach bottles, straws, toys and drums.

Results from the most recent study of the patch were recently released. A three-year mapping project by eight different organizations revealed the mass is spread across more than 600,000 square miles of water between California and Hawaii.

Beth Polidoro is an assistant professor of environmental chemistry in the School of Mathematical and Natural Sciences at Arizona State University. Polidoro has a research grant from the National Oceanic and Atmospheric Administration marine debris program, working on risk assessment of plastic litter and microplastics in near-shore marine ecosystems and seafood.

Her take on the findings:

Question: The Great Pacific Garbage Patch is now estimated to be more than twice the size of Texas and to contain 16 times more plastic than previously estimated. How long has it taken for this mass to accumulate?

Answer: The garbage patch was discovered in the late 1980’s. However, the size and amount of garbage has exponentially increased, especially over the past decade. Plastic use — and discards in general — have exponentially increased and are projected to reach more than 400 million tons per year by 2020. According to Plastic Oceans (a global nonprofit organization that addresses the issue of plastic pollution and how it impacts waters, sea life and humans), more than 500 billion plastic bags and 35 billion plastic water bottles are thrown away each year.

Q: Can this be cleaned up?

A: Given the enormity of the garbage patch, as well as the fact that there are now vast garbage patches in every ocean of the world, clean up is no easy task and will be very expensive, if not impossible. For example, the break-down products of plastics, including microplastics and hazardous chemicals, are being distributed throughout the world’s marine, terrestrial and freshwater ecosystems and can now be found in drinking water and many of the foods we eat.

Q: What will happen if it’s not cleaned up, both to the environment and marine life?

A: Plastic pollution has both physical and chemical impacts. Physical impacts include direct mortality of marine and other animals due to entanglement and ingestion. The chemical impacts are far more pervasive, in terms of microfiber and microbead dispersion throughout the enviromment, and unknown toxicological impact from their consumption, which includes a number of harmful chemicals used in plastic production and adsorbed from the environment. The impact of these chemicals on ecological and human health is still not well-known.