Newswise — As planning continues for humanity’s first visit to Mars, scientists still have much to learn about the planet’s physical makeup. By comparing current satellite images to similar shots of Earth, they are coming to understand how volcanic activity shaped the Red Planet, and extrapolating lessons learned to address concerns closer to home.

Ironically, many images of Mars are more detailed than those of our own planet, despite the fact that information about hard-to-access areas here could provide important clues to what we are seeing on other planets. Boise State volcanologist Brittany Brand recently received funding from the National Geographic Society to try to change that.

Brand and Boise State Ph.D. student Aaron Marshall currently are in Chile working at the site of a number of active volcanoes to capture images that will advance our understanding of how volcanic activity shaped the landscape. Volcanoes include Volcán Villarrica and Volcán Llaima.

Ancient lava flows and deposits from explosive eruptions are exposed along the old caldera walls at Villarrica, just east of the modern day cone. These walls and the Martian-like landscape of black rock, scoria and ash make Villarrica an excellent analog to understand volcanism on the red planet.

Ironically, on Mars, high-resolution satellite images of the surface are publically available. However, we lack the geologist’s perspective (and rock hammers!) to accurately identify the physical make-up of the layers.

Our project uses a group of geologists, a technical team and a drone [named Albert] to explore and identify the nature of the rock layers exposed within the ancient walls of Villarrica volcano. Images taken at Villarrica will be compared to satellite imagery of Martian surfaces to better identify similar deposits on Mars.

“The reason we chose to visit Villarrica and Llaima volcanoes is because they erupt the same composition of magma that is associated with ancient volcanism on Mars,” Brand said. “Before high-resolution imaging, geologists thought that much of Mars was made up of old lava flows. Now we see evidence for loose, soft layers, which may be consistent with explosive volcanism.”

Over the past few thousand years, activity at Villarrica and Llaima volcanoes has included lava flow and low-explosivity eruptions. However, both volcanoes have produced large, violent explosive eruptions in the past. This range of activity is thought to be possible on Mars as well, but is difficult to identify from satellite imagery alone.

Brand and her colleagues are hiking into the walls around the volcanoes that are constructed of lavas and ashy deposits. After identifying the deposits, a drone is used to take high resolution images from the geologists’ perspective and the satellite perspective. These images taken at Villarrica and Llaima volcanoes will be compared to satellite imagery of Martian surfaces to better identify similar deposits on Mars.

A second aspect of the project, titled “when good volcanoes go bad,” focuses on studying the deposits of ancient explosive volcanism at Llaima volcano to understand the conditions that might result in a similar, devastating eruption in the future. Thus, the work of Brand and her colleagues not only will help to identify ancient volcanic deposits on Mars, but also will help build a better understanding of how to predict and mitigate the hazards of volcanic eruptions for volcanoes in Chile and around the world. 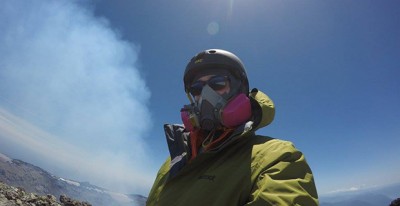 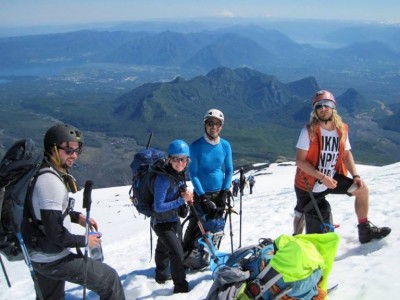