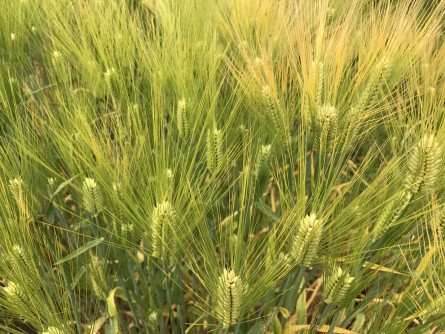 Buck barley is bred to have a hull that falls off easily during harvest. 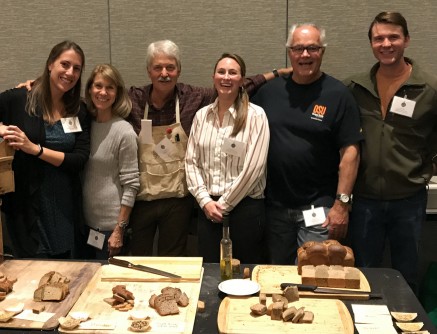 Barley Project members at The Plant Variety Showcase (October 12, 2017, Portland, OR) showcase breads made from Buck (and other naked barleys) in the foreground. From left to right: Brigid Meints, Rebecca Hayes, Patrick Hayes, Laura Helgerson, Andrew Ross, and Scott Fisk.

Newswise — Jan. 17, 2018 - Researchers at Oregon State University (OSU) are giving an ancient grain a new life: this barley is naked, but not in an indecent way.

Most barley grains are covered rather than naked. Covered varieties have a hull—or outer layer—firmly attached to the grain. The hull on ‘Buck’—as in “Buck-naked”—doesn’t hang on to the grain. Instead, the hulls fall off during harvest.

“Even barley geneticists try to have a sense of humor,” said Patrick Hayes, crop scientist. Hayes is part of the OSU Barley Project, a team of barley enthusiasts and breeders.

Food manufacturers using covered barley grind off the unpalatable hull to produce pearled barley. But pearling removes part of the nutrient-rich bran, and pearled barley isn’t considered a whole grain. Naked barley does not require pearling, allowing it to hold onto the bran and whole grain status.

Barley grain is tasty and nutritional. Hayes said that Buck has an optimum level of beta-glucan, a soluble dietary fiber that lowers cholesterol and aids digestion. Whole grain baked goods, porridges, grits, and cereals can all be made from barley. “I started my day today, as I do every day, with a bowl of barley flakes,” he said. “We aren’t trying to make barley a fad diet, but we’re telling people ‘Hey, here’s a modern version of an ancient grain, and it’s good for you!’”

Naked barley has been around for 10,000 years, the result of a natural mutation that was selected at the dawn of agriculture. But there weren’t naked varieties adapted to the Pacific Northwest. That’s where Buck comes in. It’s the first fall-planted naked barley variety to be bred specifically for the region. “Buck” may have broader adaptation: It has done well in field trials in the Upper Midwest, even surviving some Minnesota winters.

The research team behind Buck crossed two barley varieties together, one from Oregon and one from Virginia. The Oregon parent contributed desirable traits like disease resistance, while the Virginian contributed the naked factor. The combined traits enable Buck to achieve high yields and flourish with less fertilizer and water than its more familiar naked cousin, wheat. Best of all, Buck is a multi-use barley. It can be used for human food, animal feed, and beer.

Buck is at the forefront because it has a modest beta-glucan level that meets food, feed, and brewing needs. If beta-glucan is too high, things get complicated for animal nutrition and brewers. Naked barleys can produce more beer per unit of malt used, which means breweries will get more bang for their… buck.

Worldwide, most barley is used for animal feed. However, Hayes noted, “Barley exists as a significant crop today because of its unique advantages for brewing.”

Naked varieties may bring new flavors and processing advantages to brewing. In typical brewing, the hulls are used to make the initial malting process easier and act as filters. Without hulls, this can be addressed in other ways. The most sophisticated is a technology called mash filtration that reduces water use and carbon footprint. Brewers without mash filters can still use naked barley, either as part of their malt blend or by using added rice hulls.

The OSU research team is collaborating with industry and academic colleagues to develop beer recipes based on Buck. The first Buck beer was brewed by Great Western Malting of Vancouver, WA. Coming on tap soon is an experimental Buck malt beer brewed by Breakside Brewing, Portland, OR.

“It’s so satisfying to have a beer made from the barley you’ve helped develop—and to eat it too!” said Hayes.

Read more about the development of Buck in Journal of Plant Registration. The project was funded by the USDA-NIFA-OREI (National Institute of Food and Agriculture-Organic Agriculture Research and Extension Initiative) program. 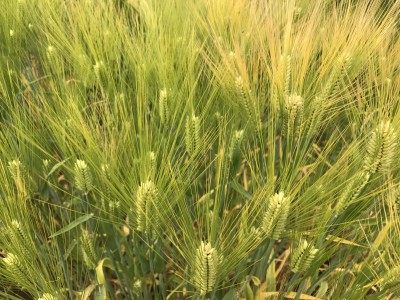 Caption: Buck barley is bred to have a hull that falls off easily during harvest. 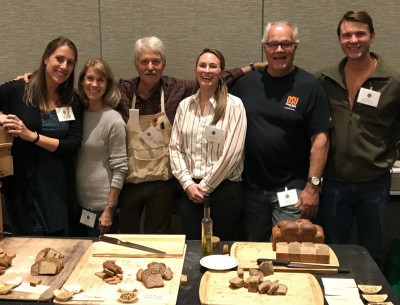