A study led by Texas Tech University shows that supersoft X-ray emissions can come from accretion as well as nuclear fusion. 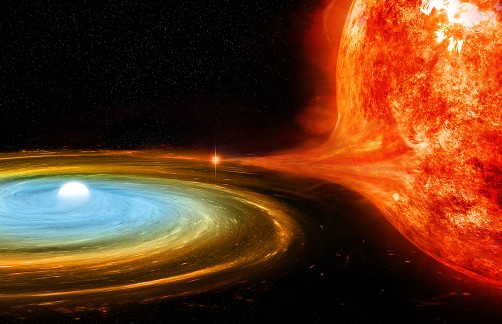 Newswise — For decades, astronomers and astrophysicists have used a specific type of supernova to measure the expansion of the universe. But a recent discovery led by Texas Tech University may turn that notion on its head.

Supersoft X-ray emission – a very strong level of the weakest X-rays – has long been considered a result of nuclear fusion on the surface of a white dwarf, a small, very dense star. But a new detection of supersoft emissions that are clearly not powered by fusion is showing scientists that fusion is not the only way such emissions occur, according to a study published today (Dec. 3) in the journal Nature Astronomy.

The event, ASASSN16-oh, was first noticed as a transient in the Small Magellanic Cloud by the All-Sky Automated Survey. Additional observations from NASA’s Swift Observatory and the Chandra X-ray Observatory helped to verify the finding.

“In the past, the supersoft sources have all been associated with nuclear fusion on the surface of white dwarfs,” said lead author Tom Maccarone, a professor in the Texas Tech Department of Physics & Astronomy. “As a white dwarf captures material from a companion star, the material piles up on the surface and becomes hot, and, eventually nuclear fusion takes place, much like in a hydrogen bomb.

“But this emission is coming from a region smaller than the surface of the white dwarf, and we have strong arguments against any kind of explosion having taken place on the white dwarf. Specifically, there are no broad emission lines in the X-ray or optical spectra, so there cannot have been any kind of strong wind generated. In some cases, nuclear fusion can be steady on the surface of a white dwarf, but it cannot start immediately as steady fusion. There must be an explosion of some kind when the fusion starts.”

The source of these emissions, then, is thought to be accretion – the process of accumulating matter – not fusion. The scientists believe the system consists of a highly evolved red giant star and a white dwarf with an extremely large disk of emission around it. The rate of inflow of matter through the disk is unstable, and when the material starts flowing more quickly, the brightness of the system shoots upward.

“What we’re seeing here is a transient episode of supersoft emission, but without any of the signs that we associate with nuclear fusion,” Maccarone said. “If a nova took place, we would expect to see material flowing away from the white dwarf. Here we don’t. Instead, what we are seeing is hot emission from the disk that is transporting the material from the companion star to the white dwarf. The transfer of mass is happening at a higher rate than in any system we’ve caught in the past.”

So what this finding shows is that there are two ways by which supersoft emission can be made: nuclear fusion and accretion.

“I am excited by this result,” Maccarone said. “It was a totally new phenomenon, and any time one finds one of those, it’s exciting.”

As exciting as this finding is on its own, perhaps the most important part is that it may change how astrophysicists measure the expansion of the universe. These objects were thought to be one of the main ways by which white dwarfs grow in mass and eventually explode as Type Ia supernovae.

“These systems also are the way we measure the expansion of the universe,” Maccarone said. “To measure that expansion more accurately than we do now, we need to understand the origin of the Type Ia supernovae. This finding – that there’s a new way to make supersoft sources – will cause us to re-think our approach to matching up the populations of these objects with the rates of the supernovae.”