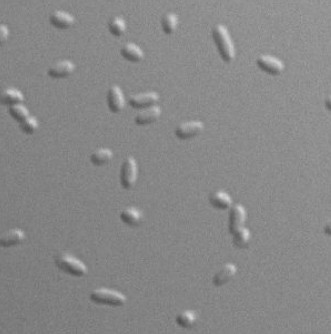 Pseudomonas aeruginosa cells can survive dramatic changes in the water content of their environment.

Newswise — Researchers at the University of Maryland have identified how the pathogenic bacterium Pseudomonas aeruginosa uses tension-activated membrane channels to stop itself from swelling up and bursting when it is suddenly exposed to water. The study, which will be published April 19 in The Journal of General Physiology, helps explain how this bacterium—a major cause of hospital-acquired infections—persists in a variety of different environments.

P. aeruginosa is a remarkably adaptable bacterium. It naturally occurs in soil and freshwater, but it can also thrive on the moist surfaces of medical equipment, leading to opportunistic infections of immunocompromised or otherwise vulnerable patients that result in life-threatening conditions like pneumonia or sepsis.

One reason for P. aeruginosa’s adaptability is its capacity to survive sudden changes in the water content of its environment. Rainfall, for example, poses a problem for bacteria because it dilutes the cell’s surrounding media, prompting water to enter the cell by osmosis. Such “osmotic downshocks” can cause cells to swell up and burst, but some bacteria, including the gut bacterium Escherichia coli, carry mechanosensitive channels in their cell membranes that open up as soon as the cell starts to swell, letting small solute molecules—or osmolytes—exit the cell so that the osmotic gradient driving water influx is reduced. E. coli carries two types of mechanosensitive channels. The MscS channel releases modest amounts of osmolytes when swelling causes low amounts of membrane tension. The MscL channel is activated at higher tension levels to release osmolytes in larger amounts.

Sergei Sukharev and colleagues at the University of Maryland found that P. aeruginosa can tolerate considerably larger osmotic shocks than E. coli. P. aeruginosa cells were less permeable to water and faster at releasing osmolytes. The lower water permeability buys the cells more time to respond to osmotic downshocks, while the faster osmolyte release allows the bacterium to lose up to 20% of its dry weight in just 28 milliseconds.

The researchers determined that P. aeruginosa expresses one MscL- and two MscS-type channels. The MscL-type channel predominates and is present at a higher density in P. aeruginosa membranes than its equivalent in E. coli membranes, allowing P. aeruginosa cells to release larger amounts of osmolytes. But the two MscS-type channels are also important; they are activated earlier in response to cell swelling, and, by releasing modest amounts of osmolytes, they can reduce membrane tension and prevent the MscL channels from releasing more osmolytes than necessary.

“These results move us one step closer to a mechanistic understanding of the physiological response to osmotic downshocks,” says Sukharev. “They also help explain the higher osmotic stability of highly adaptable P. aeruginosa as compared to enteric E. coli.”

About The Journal of General Physiology The Journal of General Physiology (JGP) features peer-reviewed research in biological, chemical, or physical mechanisms of broad physiological significance, with an emphasis on physiological problems at the cellular and molecular level. All editorial decisions are made by research-active scientists in conjunction with in-house scientific editors. JGP provides free online access to many article types from the date of publication and to all archival content. Established in 1918, JGP is published by The Rockefeller University Press. For more information, visit jgp.org.

Visit our Newsroom and sign up for a weekly preview of articles to be published. Embargoed media alerts are for journalists only.