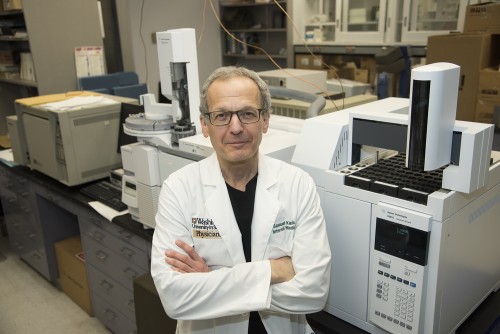 Samuel Klein, MD, and colleagues at Washington University School of Medicine in St. Louis found that a subset of obese people are protected from developing unhealthy metabolic profiles linked to diabetes and heart disease even when they gain additional weight.

In a study at Washington University School of Medicine in St. Louis, obese people were asked to gain additional weight to see how the added pounds affected their metabolic profiles. (After the study ended, the researchers then helped the participants lose the weight they had gained.) Senior author Samuel Klein, MD, explains the results, which showed that some obese people are protected from developing unhealthy metabolic profiles linked to diabetes and heart disease even when they gain additional weight.

Newswise — New research demonstrates that obesity does not always go hand in hand with metabolic changes in the body that can lead to diabetes, heart disease and stroke.

In a study at Washington University School of Medicine in St. Louis, researchers found that a subset of obese people do not have common metabolic abnormalities associated with obesity, such as insulin resistance, abnormal blood lipids (high triglycerides and low HDL cholesterol), high blood pressure and excess liver fat.

In addition, obese people who didn’t have these metabolic problems when the study began did not develop them even after they gained more weight.

The findings are published Jan. 2 in The Journal of Clinical Investigation.

The study involved 20 obese participants who were asked to gain about 15 pounds over several months to determine how the extra pounds affected their metabolic functions.

“Our goal was to have research participants consume 1,000 extra calories every day until each gained 6 percent of his or her body weight,” said first author Elisa Fabbrini, MD, PhD, assistant professor of medicine. “This was not easy to do. It is just as difficult to get people to gain weight as it is to get them to lose weight.”

All of the subjects gained weight by eating at fast-food restaurants, under the supervision of a dietitian. The researchers chose fast-food chain restaurants that provide rigorously regulated portion sizes and nutritional information.

Before and after weight gain, the researchers carefully evaluated each study subject’s body composition, insulin sensitivity and ability to regulate blood sugar, liver fat and other measures of metabolic health.

“This research demonstrates that some obese people are protected from the adverse metabolic effects of moderate weight gain, whereas others are predisposed to develop these problems,” said senior investigator Samuel Klein, MD, the Danforth Professor of Medicine and Nutritional Science and director of Washington University’s Center for Human Nutrition.

“This observation is important clinically because about 25 percent of obese people do not have metabolic complications," he added. "Our data shows that these people remain metabolically normal even after they gain additional weight.”

As part of the study, the researchers then helped the subjects lose the weight they had gained.

“It’s important to point out that once the study was completed, we enrolled all subjects in our weight-loss program to make sure they lost all of the weight they had gained, or more,” said Klein, who also directs the Division of Geriatrics and Nutritional Science and the Atkins Center of Excellence in Obesity Medicine.

The researchers identified some key measurements that distinguished metabolically normal obese subjects from those with problems. One was the presence of fat inside the liver. Those with abnormal metabolism accumulated fat there.

Another difference involved gene function in fat tissue. People with normal metabolism in spite of their obesity expressed more genes that regulate fat production and accumulation. And the activity of those genes increased even more when the metabolically normal people gained weight. That wasn’t true for people with abnormal metabolism.

“These results suggest that the ability of body fat to expand and increase in a healthy way may protect some people from the metabolic problems associated with obesity and weight gain,” said Klein.

He noted that obesity contributes to more than 60 different unhealthy conditions.

“We need more studies to try to understand why obesity causes specific diseases in some people but not in others,” Klein said. “Could it be genetics, specific dietary intake, physical lifestyle, emotional health or even the microbes that live in the gut?”

As they look for answers, Klein and his colleagues plan to more closely analyze fat, muscle and liver tissue and to include lean people in future studies so that the researchers can learn more about how and why some individuals are protected from metabolic problems while others are vulnerable.

Editor’s note: While the study was underway, it was featured in the HBO documentary “Weight of the Nation.” A 10-minute segment of the program that focuses on the study begins at 42:10 in the HBO video: https://www.youtube.com/watch?v=-pEkCbqN4uo