Results suggest novel approaches to maintaining cognition as we age 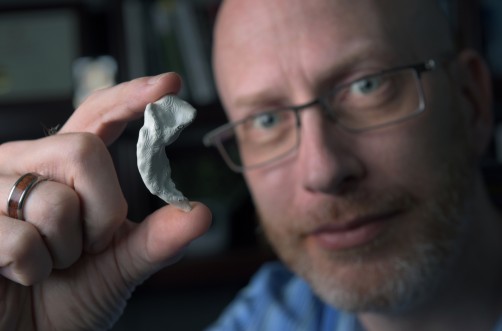 UCI professor of neurobiology & behavior Craig Stark, here holding a 3-D-printed model of his own hippocampus, says that “video games may be a nice, viable route” to maintaining cognitive health.

Newswise — Irvine, Calif. — Don’t put that controller down just yet. Playing three-dimensional video games – besides being lots of fun – can boost the formation of memories, according to University of California, Irvine neurobiologists.

Along with adding to the trove of research that shows these games can improve eye-hand coordination and reaction time, this finding shows the potential for novel virtual approaches to helping people who lose memory as they age or suffer from dementia. Study results appear Dec. 9 in The Journal of Neuroscience.

For their research, Craig Stark and Dane Clemenson of UCI’s Center for the Neurobiology of Learning & Memory recruited non-gamer college students to play either a video game with a passive, two-dimensional environment (“Angry Birds”) or one with an intricate, 3-D setting (“Super Mario 3D World”) for 30 minutes per day over two weeks.

Before and after the two-week period, the students took memory tests that engaged the brain’s hippocampus, the region associated with complex learning and memory. They were given a series of pictures of everyday objects to study. Then they were shown images of the same objects, new ones and others that differed slightly from the original items and asked to categorize them. Recognition of the slightly altered images requires the hippocampus, Stark said, and his earlier research had demonstrated that the ability to do this clearly declines with age. This is a large part of why it’s so difficult to learn new names or remember where you put your keys as you get older.

Students playing the 3-D video game improved their scores on the memory test, while the 2-D gamers did not. The boost was not small either. Memory performance increased by about 12 percent, the same amount it normally decreases between the ages of 45 and 70.

In previous studies on rodents, postdoctoral scholar Clemenson and others showed that exploring the environment resulted in the growth of new neurons that became entrenched in the hippocampus’ memory circuit and increased neuronal signaling networks. Stark noted some commonalities between the 3-D game the humans played and the environment the rodents explored – qualities lacking in the 2-D game.

“First, the 3-D games have a few things the 2-D ones do not,” he said. “They’ve got a lot more spatial information in there to explore. Second, they’re much more complex, with a lot more information to learn. Either way, we know this kind of learning and memory not only stimulates but requires the hippocampus.”

Stark added that it’s unclear whether the overall amount of information and complexity in the 3-D game or the spatial relationships and exploration is stimulating the hippocampus. “This is one question we’re following up on,” he said.

Unlike typical brain training programs, the professor of neurobiology & behavior pointed out, video games are not created with specific cognitive processes in mind but rather are designed to immerse users in the characters and adventure. They draw on many cognitive processes, including visual, spatial, emotional, motivational, attentional, critical thinking, problem-solving and working memory.

“It’s quite possible that by explicitly avoiding a narrow focus on a single … cognitive domain and by more closely paralleling natural experience, immersive video games may be better suited to provide enriching experiences that translate into functional gains,” Stark said.

The next step for him and his colleagues is to determine if environmental enrichment – either through 3-D video games or real-world exploration experiences – can reverse the hippocampal-dependent cognitive deficits present in older populations. This effort is funded by a $300,000 Dana Foundation grant.

“Can we use this video game approach to help improve hippocampus functioning?” Stark asked. “It’s often suggested that an active, engaged lifestyle can be a real factor in stemming cognitive aging. While we can’t all travel the world on vacation, we can do many other things to keep us cognitively engaged and active. Video games may be a nice, viable route.”

The Journal of Neuroscience study was supported by the National Institute on Aging (grant R01-AG034613) and the James S. McDonnell Foundation (grant 624748).

Media access: Radio programs/stations may, for a fee, use an on-campus ISDN line to interview UC Irvine faculty and experts, subject to availability and university approval. For more UC Irvine news, visit news.uci.edu. Additional resources for journalists may be found at communications.uci.edu/for-journalists.