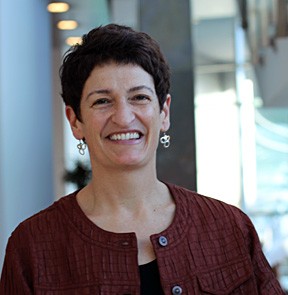 Newswise — Quitting smoking isn't just a common New Year's resolution, it's the year-round wish of more than two-thirds of American smokers, according to the Centers for Disease Control and Prevention. Yet only 6 percent of smokers in the United States who try to quit actually succeed.

How does the program achieve such a high quit rate? By continually integrating the latest tobacco cessation guidelines and research into routine medical care, said Kimber Richter, Ph.D., MPH, director of UKanQuit and professor in the Department of Preventive Medicine and Public Health in the KU School of Medicine.

UKanQuit helps patients use their smoke-free stay at KU Hospital as a springboard to a life without tobacco by providing bedside tobacco counseling, medications and other smoking-cessation tools.

"It turns the patient's hospitalization into an opportunity to quit and makes them realize that quitting smoking is an important part of their hospital recovery," said Richter.

The program also serves as the basis for studies that contribute to the science of tobacco cessation. UKanQuit researchers have been awarded $6 million in National Institutes of Health grants and published 10 journal articles based on the program. It's a success that neither the medical center nor the hospital could achieve alone. Medical center researchers study the hospital's implementation of the program, and the hospital then uses their findings to guide treatment.

"As a researcher, I want to generate results that make a difference. The hospital, as a clinical enterprise, needs hard-nosed evidence," said Richter. "The incredible thing about the partnership between the medical center and the hospital is that it generates pragmatic, meaningful research that achieves both goals."

The mother of invention

When the hospital went smoke-free in 2006, officials were initially concerned with making smokers comfortable during their hospital stays. Richter said administrators soon realized that hospitalization provided a perfect teachable environment to help patients eliminate tobacco from their lives. At that time, it was common for hospitals to identify smokers and provide advice to quit. Even then, tobacco medication, professional counseling and other tools often were not always offered.

"Studies have shown that smokers get advice about quitting, but they often don't get evidence-based services, such as high quality, supportive counseling or meds," said Richter.

Working with Edward Ellerbeck, M.D., MPH, chair of the Department of Preventive Medicine and Public Health, Richter set out to create a comprehensive evidence-based program for all KU inpatients. In UKanQuit, nurses record the smoking status of each patient when they are admitted, and smokers are offered counseling as well as medication to ease withdrawal.

Patients who want counseling are visited in their hospital room by a tobacco treatment specialist who helps them devise a plan to quit. When the patient is discharged, the counselor arranges for more prescriptions and a referral to a tobacco quit line, a free service that offers telephone counseling to smokers. UKanQuit treats smokeless tobacco users, too. Program counselors call patients one month after discharge to evaluate their progress.

Andrea Elyachar, a certified tobacco treatment specialist for UKanQuit, says patients, accustomed to being judged for their addiction, often expect her to give them a lecture, but instead, she greets them with compassion.

"I ask them to rate their craving on a scale of 0 to 4, so I can make them more comfortable. I say, 'We're on your side, and we have support and some meds that can help.'"

Those medications include replacement therapies such as patches, gum and lozenges, which reduce cravings by releasing small amounts of nicotine. Studies have found these medications can increase a person's chances of quitting by 50 to 70 percent. The antidepressants Wellbutrin and Zyban (bupropion) have also been found to lessen withdrawal symptoms. And the same year the program was launched, the Food and Drug Administration approved Chantix (varenicline), which acts on the brain to reduce cravings and decrease the pleasure smoking provides.

In 2008, UKanQuit adjusted its protocol after studies showed that combining these medications-either using more than one nicotine replacement therapy or combining them with Chantix or Zyban or Wellbutrin-can double or triple the chances a patient will quit smoking.

"For many people, the combination completely takes away the craving," said Elyachar. "And not craving makes it easier to change behavior."

If one combination doesn't work, the counselor can recommend another.

"What people don't realize is that tools like medications and behavioral support double or even triple their odds of quitting," said Richter. "There are many treatment options, and coverage by Medicaid and private insurance is improving all the time. Just like treatment for any other health issue, if the first tool or combination doesn't work, they can try something else."

Support after discharge is critical for helping hospitalized smokers quit. Studies by UKanQuit demonstrate that one in four smokers who use the free tobacco quitline are smoke-free six months after discharge. Since the program began, smartphones have produced a new generation of tools: UKanQuit now also recommends SmokefreeTXT, a text messaging service that provides encouragement and advice to smokers, as well as free apps such as QuitSTART, NCI QuitPal and QuitGuide.

Richter and Ellerbeck are now studying the effectiveness of proactively providing medications and counseling to all inpatients who smoke, rather than just those who ask for UKanQuit services. Richter notes that for patients with chronic illnesses, such as asthma and diabetes, treatment is provided as soon as the illness is identified. Smoking-related illness in the United States costs more than $300 billion each year, including nearly $170 billion for medical care. Yet for most people with tobacco dependence, the default treatment is no treatment at all.

"This program constantly reminds me that smoking is not just a bad habit. It's life-threatening addiction that people worry deeply about," Richter said. "It's a privilege to help them take the first steps toward treatment, and when they finally quit, it's a very powerful experience."