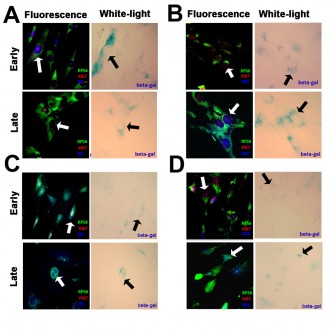 Newswise — The mouse is the most widely used model organism to understand human genetics, biology, and diseases in the research setting. Aspects of gene function in humans can be predicted by studies of the corresponding gene in mice, but new research findings have revealed important divergences between the species which scientists will need to understand better through further investigation.

The research group that made this discovery was lead by Professor Umberto Galderisi at the Department of Experimental Medicine, Campania University “Luigi Vanvitelli” in Naples, Italy, and Antonio Giordano at the Sbarro Institute for Molecular Medicine  department of Biology at Temple University in Philadelphia. Their paper, “Misidentified Human Gene Functions with Mouse Models: The Case of the Retinoblastoma Gene Family in Senescence” by Nicola Alessio et al., has been published in the journal Neoplasia.

These differences can have a significant impact on the efficacy of research findings to infer gene function in humans by means of the so-called knock-out, or in situ experiments carried out in mouse models. In their paper, the authors describe how the retinoblastoma gene family may represent an illustrative example of this possible gene divergence between humans and mice. This gene family comprises three members (RB1, RB2/P130, and P107), which regulate several aspects of cell life, such as cell cycle, apoptosis, senescence, and differentiation.

Researchers analyzed differences in functions between mice and humans in this gene family that cannot be overlooked, if scientists are to be able to interpret mouse model experiments for purposes of diagnosis and treatment of human diseases.

“We decided to investigate the role of retinoblastoma gene family members in the regulation of the senescence process,”  says Galderisi. “Senescence, or cellular aging, is the deterioration of activities that can occur in the cells. This process may have either anti- or pro-cancer functions, depending on context. For this reason, studying molecular mechanisms governing senescence is of great importance for human diseases,” Gladerisi says.

“Our interest resides on the fact that, in human mesenchymal stromal cells (MSCs), the acute silencing of RB1 did not induce unrestricted proliferation as had been described mouse model studies,” says Giordano, “but, rather, resulted in cell cycle arrest and cellular senescence.” In other words, the effect of silencing the RB1 gene had the opposite effect in the mouse model versus human, indicating that the well-known RB1-P16 axis involved in senescence may not have a general role.

The authors believe their study demonstrates that the function of a protein has many aspects that are context-dependent, such as species and cell type.

These findings could be useful as a general paradigm for caution when inferring the role of a gene in humans, based on animal studies. Furthermore, human MSCs are being studied in several ongoing clinical trials, and the drivers of senescence described in this study should be thoroughly understood in order to maintain strict control for their safe and effective use in research.