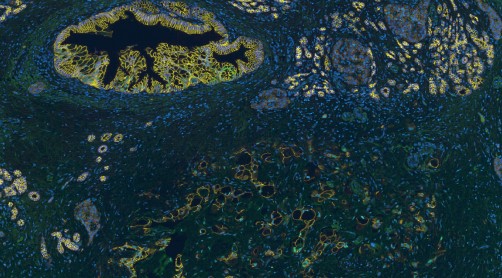 Newswise — Genentech researchers have identified an enzyme that shifts pancreatic cancer cells to a more aggressive, drug-resistant state by epigenetically modifying the cells’ chromatin. The study, which will be published December 11 in the Journal of Cell Biology, suggests that targeting this enzyme could make pancreatic cancer cells more vulnerable to existing therapies that currently have only limited effect against this deadly form of cancer.

The vast majority of cancers originate in epithelial tissues, where cells are normally organized into tightly packed sheets. As cancers progress, however, many tumor cells lose their epithelial characteristics and transition to a so-called mesenchymal state in which they detach from neighboring cells and become more mobile, allowing them to invade and form secondary tumors in other tissues. Mesenchymal tumor cells are also more resistant to chemotherapy drugs than their epithelial counterparts, and many of them appear to have stem cell–like properties that allow them to drive tumor growth.

Given these unfavorable characteristics, researchers are interested in developing ways to reverse the epithelial-to-mesenchymal transition in tumors. This approach could be particularly beneficial in the treatment of pancreatic cancer, one of the deadliest forms of the disease that typically shows little response to existing chemo- and immunotherapies. “Priming pancreatic cancers with an epithelial-inducing agent might not only decrease invasion, metastasis, and limit stem cell–like behavior, but may also increase responses to existing cancer drugs,” explains Ira Mellman, vice president of cancer immunology at Genentech.

Researchers have already identified many of the proteins that regulate epithelial-to-mesenchymal transitions, but attempts at targeting these proteins in cancer patients to convert mesenchymal tumor cells into epithelial cells have so far proven unsuccessful. However, large-scale changes in cell state, such as epithelial–mesenchymal transitions, are often orchestrated by epigenetic regulators that control the expression of many different genes by chemically modifying their DNA or the histone proteins that package them into chromosomes.

“The acquisition of these epithelial characteristics was sufficient to reduce cell invasion and motility and increase sensitivity to gemcitabine and 5-fluorouracil, two of the most commonly used chemotherapies in human pancreatic ductal adenocarcinoma,” says Viotti. The cells also appeared to lose their ability to act like stem cells capable of driving tumor growth.

In contrast, when the researchers boosted SUV420H2 levels, epithelial-like pancreatic cancer cells were converted into a mesenchymal-like state. Mellman and colleagues then examined human pancreatic adenocarcinoma samples and saw that SUV420H2 levels were low in healthy regions of the pancreas, slightly elevated during the early stages of tumorigenesis, and strongly increased in advanced, invasive portions of the tumor that had lost their epithelial characteristics.

Histone-modifying enzymes such as SUV420H2 are relatively easy to target with specific inhibitory drug molecules, but Mellman and colleagues caution that it is still unclear whether or not converting mesenchymal tumor cells into epithelial cells will be beneficial for cancer patients. “Nonetheless, promoting the epithelial state by targeting SUV420H2 in combination with conventional chemotherapies and decreasing resistance might prove to be an effective treatment for the devastating diagnosis of pancreatic cancer,” Mellman says.

About the Journal of Cell Biology The Journal of Cell Biology (JCB) features peer-reviewed research on all aspects of cellular structure and function. All editorial decisions are made by research-active scientists in conjunction with in-house scientific editors. JCB provides free online access to many article types from the date of publication and to all archival content. Established in 1955, JCB is published by Rockefeller University Press. For more information, visit jcb.org.