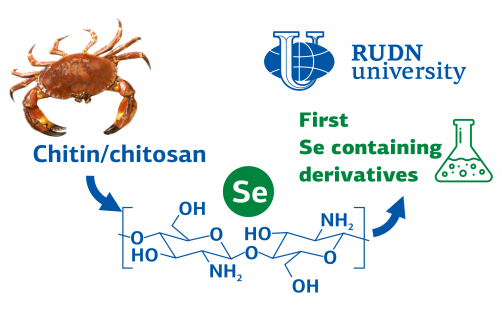 Newswise — RUDN University chemists have created the first derivatives of chitin and chitosan with selenium. The new compounds showed antibacterial and catalytic activity. A simple procedure for obtaining does not require harsh conditions. The results are published in International Journal of Biological macromolecules .

The biopolymer chitin is a naturally occurring substance that makes up the exoskeleton of arthropods, the cell walls of fungi and some bacteria. Chitosan is obtained from it , which is used in the manufacture of food and cosmetics, used in biomedical products, and in agriculture. In addition, chitosan and chitin itself exhibit antibacterial activity, while they are non-toxic and completely biocompatible. RUDN University chemists for the first time created new substances based on chitosan and chitin with the addition of the metal selenium, which has strong biological and catalytic properties. The resulting products were found to be more effective against certain bacteria and fungi than common antibiotics. In addition, they turned out to be effective catalysts in the reaction for obtaining acetophenone, an organic liquid that is used in perfumery and medicine. The production method itself is simple and environmentally friendly.

“Selenium containing derivatives have not yet been described in either chitin chemistry or chitosan chemistry. Meanwhile, selenium compounds are promising as pharmacologically active substances and as catalysts in many synthetic reactions. Our goal was to obtain the first derivatives of chitin and chitosan with selenium and evaluate their antimicrobial properties against bacteria and fungi, as well as their catalytic activity,” said Andrey Kritchenkov, Doctor of Science in Chemistry, Associate Professor of the Department of Inorganic Chemistry, RUDN University.

Chemists used chitin and chitosan from crab shell. To create a compound based on chitosan, a weak solution of acetic acid is used, and in the case of chitin, the solvent is even simpler - ordinary water. The connection of chitin or chitosan with a selenium containing substance takes 12-25 minutes at a temperature of 25 ℃ under the action of ultrasound. RUDN University researchers tested the antibacterial activity of the obtained compounds on the example of bacteria: gram-positive Staphylococcus aureus and gram-negative Escherichia coli, and fungi: Aspergillus fuming and Geotrichum candida. All new compounds have proven to be no less effective than common antibiotics.

The antimicrobial activity of new compounds depends on the proportions of chitin/chitosan and selenium-containing fragments. All of the new compounds were found to be comparable in efficacy to the antibiotics ampicillin and gentamicin, and some were even more effective. For example, ampicillin destroyed Staphylococcus aureus within a radius of about 30 mm in a Petri dish, and two new compounds - within a radius of about 34 mm. In addition, new substances proved to be an effective catalyst in the reaction of obtaining acetophenone from phenylethyl alcohol at room temperature. The catalyst makes it possible to obtain the yield of the final product up to 96% of the theoretical value.

“We found high antibacterial and antifungal activity of the developed chitin and chitosan derivatives . In addition, the developed antimicrobial systems based on chitin and chitosan are non-toxic. The results obtained are among the best reported in the literature and have the potential for further research in vivo . Selenium -containing derivatives proved to be highly efficient catalysts for the production of acetophenone at room temperature. This makes them interesting objects for study,” said Anton Egorov, RUDN Research Assistant.