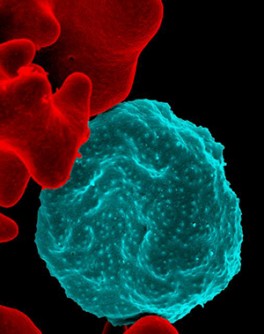 Newswise — Scientists may be able to entomb the malaria parasite in a prison of its own making, researchers at Washington University School of Medicine in St. Louis report July 16 in Nature.

As it invades a red blood cell, the malaria parasite takes part of the host cell’s membrane to build a protective compartment. To grow properly, steal nourishment and dump waste, the parasite then starts a series of major renovations that transform the red blood cell into a suitable home.

But the new research reveals the proteins that make these renovations must pass through a single pore in the parasite’s compartment to get into the red blood cell. When the scientists disrupted passage through that pore in cell cultures, the parasite stopped growing and died.

“The malaria parasite secretes hundreds of diverse proteins to seize control of red blood cells,” said first author Josh R. Beck, PhD, a postdoctoral research scholar. “We’ve been searching for a single step that all those various proteins have to take to be secreted, and this looks like just such a bottleneck.”

A separate study by researchers at the Burnet Institute and Deakin University in Australia, published in the same issue of Nature, also highlights the importance of the pore to the parasite’s survival. Researchers believe blocking the pore leaves the parasite fatally imprisoned, unable to steal resources from the red blood cell or dispose of its wastes.

The malaria parasite, Plasmodium falciparum, is among the world’s deadliest pathogens. Malaria is spread mainly by the bite of infected mosquitoes and is most common in Africa. In 2012, an estimated 207 million cases of malaria occurred worldwide, leading to 627,000 deaths, according to the World Health Organization. Resistance to drug treatments is spreading among the parasite’s many strains, and researchers are working hard to find new drug targets.

In the new study, he and his colleagues looked at heat shock protein 101 (HSP101). Scientists named this family of proteins “heat shock” because they become active when cells are overheated or stressed. The proteins have multiple functions, including guiding the folding and unfolding of other proteins.

Previous studies have suggested that HSP101 might be involved in protein secretion. The researchers disabled HSP101 in cell cultures, expecting to block the discharge of some malarial proteins. To their surprise, they stopped all of them.

“We think this is a very promising target for drug development,” Goldberg said. “We’re a long way from getting a new drug, but in the short term we may look at screening a variety of compounds to see if they have the potential to block HSP101.”

The scientists think HSP101 may ready malarial proteins for secretion through a pore that opens into the red blood cell. Part of this preparation may involve unfolding the proteins into a linear form that allows them to more easily pass through the narrow pore. HSP101 may also give the proteins a biochemical kick that pushes them through the pore.

Beck noted that researchers at the Burnet Institute neutralized the parasite in a similar fashion by disabling another protein thought to be involved in the passage of proteins through this pore.