24-Jan-2018 8:05 AM EST, by University of Florida Institute of Food and Agricultural Sciences
favorite_border 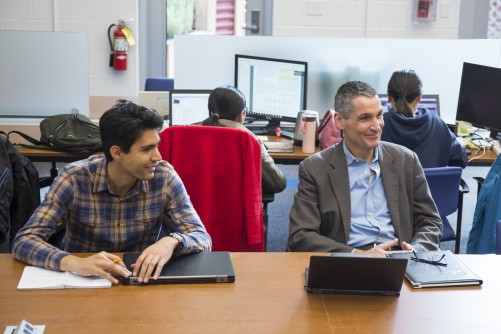 More than 14,000 people from more than 160 nations worldwide have requested the computer’s software so they can use its data and software to decide where, when and how to grow crops, said Gerrit Hoogenboom, a UF/IFAS professor of agricultural and biological engineering, at right in photo.

Newswise — GAINESVILLE, Fla. --- Researchers from across the globe -- including some from the University of Florida -- are improving a UF/IFAS-designed software system developed to help feed the world.

More than 30 scientists came to UF this month to help develop new prediction models for producing crops in developed and developing countries. They met at the UF Institute for Sustainable Food Systems from Jan. 8 to 12 to develop ideas about how to improve a crop-modeling system called Decision Support System for Agrotechnology Transfer (DSSAT).

“We brought a group of scientists together to help advance the science of the software,” said Gerrit Hoogenboom, a UF/IFAS professor of agricultural and biological engineering. “We want to develop a mechanism to make it self-sustaining.”

As an example of their work at the conference, researchers incorporated new models for crops like the cereal tef and cassava, which are typically grown in developing countries, said Jim Jones, a UF/IFAS professor of agricultural and biological engineering.

DSSAT lets anyone predict performance of crops growing in different environments, under various management conditions and using divergent genetic material. More than 14,000 people from more than 160 nations worldwide have requested the computer’s software so they can use its data and software to decide where, when and how to grow crops, Hoogenboom said.

Jones’ history with the crop-modeling software goes back to 1983. The U.S. Agency for International Development – or USAID – asked Jones to contribute to a new initiative on the use of agricultural systems to determine how to transfer research results from one data set to others. Jones worked with soil scientists, agronomists, statisticians, plant pathologists and economists to develop concepts for integrating models that led to DSSAT.

When DSSAT was released in 1986, it had only four crops but now contains models for 35, and it’s used to study crops in developed and developing nations, Hoogenboom said.

One of the advantages of the computer model is that researchers do not have to conduct field trials on crops.