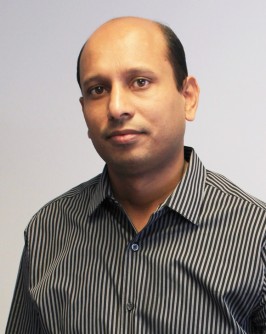 Newswise — JUPITER, FL – February 15, 2017 – Scientists are working to understand the mechanisms that make weight loss so complicated. Exercise burns calories, of course, but scientists are also looking at how the body burns more energy to stay warm in cold temperatures.

Is there a way to get metabolism to ramp up—even when it’s not cold out?

TSRI Assistant Professor Anutosh Chakraborty is on a mission to answer this question. His past research revealed a new therapeutic target in this battle—a protein that actually promotes fat accumulation in animal models by slowing stored energy (fat) breakdown and encouraging weight gain.

Now, in a study recently published online in the journal Molecular Metabolism, Chakraborty and his colleagues have shown that deleting the gene for this protein, known as IP6K1, protects animal models from both obesity and diabetes. This protective effect is seen regardless of diet, even at what’s known as a thermoneutral temperature (around 86⁰F). This means inhibiting IP6K1 should help animals burn more energy, regardless of outside conditions.

“In genetically altered animal models that lack IP6K1, we found that deletion dramatically protects these knock-out mice from diet-induced obesity and insulin resistance regardless of the temperature in the environment,” Chakraborty said. “When we inhibited the enzyme with chemical compounds, the results were similar.”

Temperature is important in the study of obesity because an animal in lower temperatures will rapidly lose weight as it burns more energy to try to maintain core body temperature.

Because humans can maintain their body temperatures in a number of ways—clothing, for example—any pathway that reduces body weight at higher temperatures is a highly encouraging target in human obesity.

The new study suggests a future pharmaceutical may be able to target IP6K1 to mimic the energy burning seen at relatively lower temperatures.

“If we delete IP6K1, the animals gain less body weight because they simply expend more energy—regardless of temperature. That’s important because blocking weight gain by enhancing energy expenditure in a thermoneutral environment is harder and thus, targeting IP6K1 is expected to be successful in ameliorating obesity in humans,” said Chakraborty.

“If you’re developing an anti-obesity drug based on inhibiting IP6K1, our new findings shows that there are potentially very few restrictions for its use—a subject would lose weight even on a high-fat diet, and nobody would have to sit in a refrigerator to make it work,” he added.

The first author of the study, “Global IP6K1 deletion enhances temperature modulated energy expenditure which reduces carbohydrate and fat induced weight gain,” is TSRI’s Qingzhang Zhu. Other authors are Sarbani Ghoshal, at TSRI at the time of the study, now at the Saint Louis University School of Medicine, and Richa Tyagi of the Johns Hopkins University School of Medicine.

This work is supported by the National Institutes of Health (grant R01DK103746) and the state of Florida._________About The Scripps Research InstituteThe Scripps Research Institute (TSRI) is one of the world's largest independent, not-for-profit organizations focusing on research in the biomedical sciences. TSRI is internationally recognized for its contributions to science and health, including its role in laying the foundation for new treatments for cancer, rheumatoid arthritis, hemophilia, and other diseases. An institution that evolved from the Scripps Metabolic Clinic founded by philanthropist Ellen Browning Scripps in 1924, the institute now employs more than 2,500 people on its campuses in La Jolla, CA, and Jupiter, FL, where its renowned scientists—including two Nobel laureates and 20 members of the National Academies of Science, Engineering or Medicine—work toward their next discoveries. The institute's graduate program, which awards PhD degrees in biology and chemistry, ranks among the top ten of its kind in the nation. In October 2016, TSRI announced a strategic affiliation with the California Institute for Biomedical Research (Calibr), representing a renewed commitment to the discovery and development of new medicines to address unmet medical needs. For more information, see www.scripps.edu.